America should not be satisfied with some foreign mythology. It''s time to create our own superstar deity, one that embodies American values. And there may several moderately qualified candidates but only one that towers above the rest.

A curious child might look upon that rainbow of religious thought found throughout the world and ponder over the fact that higher beings always seem to share the same visual appearance as the ethnic groups that follow them. This inquisitive youth might ask, Why? Like, why isn’t Vishnu black or Loki Mexican? Why doesn’t Jesus wear a sombrero or why doesn’t Zeus have dreadlocks? Unbeknownst to the child being conformed to the parent’s chosen doctrine, the explanation is rather simple and hardly surprising.

Before scientific inquiry, human beings did not comprehend their relationship with the physical world. To validate Man’s existence and assert its own self-importance, human societies came up with explanations that were emotionally pleasing and forged deities in their own image as the cure-all elixir to Life’s unanswerable questions of the time.

The Egyptians created Amun Ra, painted him with their sun-kissed skin and decorated his appendages with gold jewelry and pectorals. The Jews conceived Jesus and dressed him like a doll in their sandals, simple cloak, and tunic. The ancient Japanese produced the Seven Lucky Gods and blessed them with their iconic facial whiskers and kimono robes. The Maya molded their sloped foreheads and beaked noses onto their god’s faces. Indians birthed a plethora of divine beings, yet all were given their people’s same flowing hair, untouched by scissors. The list of Man creating gods in his image endless.

So what about America? Are we supposed to be satisfied with the hand-me-downs of some foreign mythology just because our society is too limited in creative expression to invent its own? Jesus H. Christ on a popsicle stick, if some self-righteous gent spoke to my person with such contempt as to imply there was an American creativity crisis, I would promptly remove my gloves and strike the subversive across the face with the taut leather and knock that pompous monocle right from their pinched eyebrow.

What’s more, I’m shaken with hysteria when I see America’s racist population clinging so wildly to the second-hand character Jesus when the man didn’t speak a lick of English. What America deserves is its own superstar deity whose appearance and persona reflect that of American ambition and beliefs. No more ambiguity in foreign scriptures, we shall draft our own and leave nothing open to interpretation. Sensible action would leave us with dinosaurs this time around and anything else we happen to discover before the time of publication.

But now the question presents itself in full earnest. Who or what should we submit ardent passion to in our quest for patriotic spiritualism? We need an idea that generates more than a weak shoulder shrug and an indifferent “meh”.

You know, humanity has always looked upwards in search of answers, praying for rain, arranging monuments to correlate with the juxtaposition of the stars, and holding ceremonies or holidays to parallel solar cycles. But do we yet again anthropomorphize celestial events into benign allegories to communicate our own idealistic values? I hate to sound like a wet blanket, but that 5-dollar whore has been bought one too many times in the past. The old puss is worn out. We need a more youthful figure to make those habitual Sunday morning routines stand erect with rapture.

I’ll bet there’s a noble celebrity somewhere in American history worthy of our unending praise, whose inherent character provides us with endless inspiration and goodwill. Someone with unlimited goodness that deserves our relentless admiration. But who?

How about that great explorer, Christopher Columbus? No, he was a racist bigot. The clever Benjamin Franklin? Nah, he was well versed in adultery. Well, how about that tall glass of water, Abraham Lincoln? Maybe… but he exhibited many of the same dictatorial qualities of a tyrant, so also No.

We can sit and spin our tires all day crossing off possible candidates to no end, but I’ll just make this simple. There is but one person in America’s great history whose travels, strength and goodness helped America grow. One man who stood taller than all others in meriting our glowing esteem. One uncontested leader with a heart so big its beat was heard for miles around. This giant of a figure is none other than Paul Bunyan.

There was a time in the 1800s when America needed to cut down forests of beautiful trees to build homes, hospitals and schools. America’s Industrial Revolution was in motion and deforestation needed to be done quickly to increase the goods and services that would accommodate a burgeoning society.

Although born in Maine, Paul had spent much of his life in, and around, the Great Lake States laying waste to the mighty forests so his smaller man could plant giant swaths of corn that would find its way into high fructose corn syrup, Monosodium Glutamate (MSG), and other much needed byproducts. 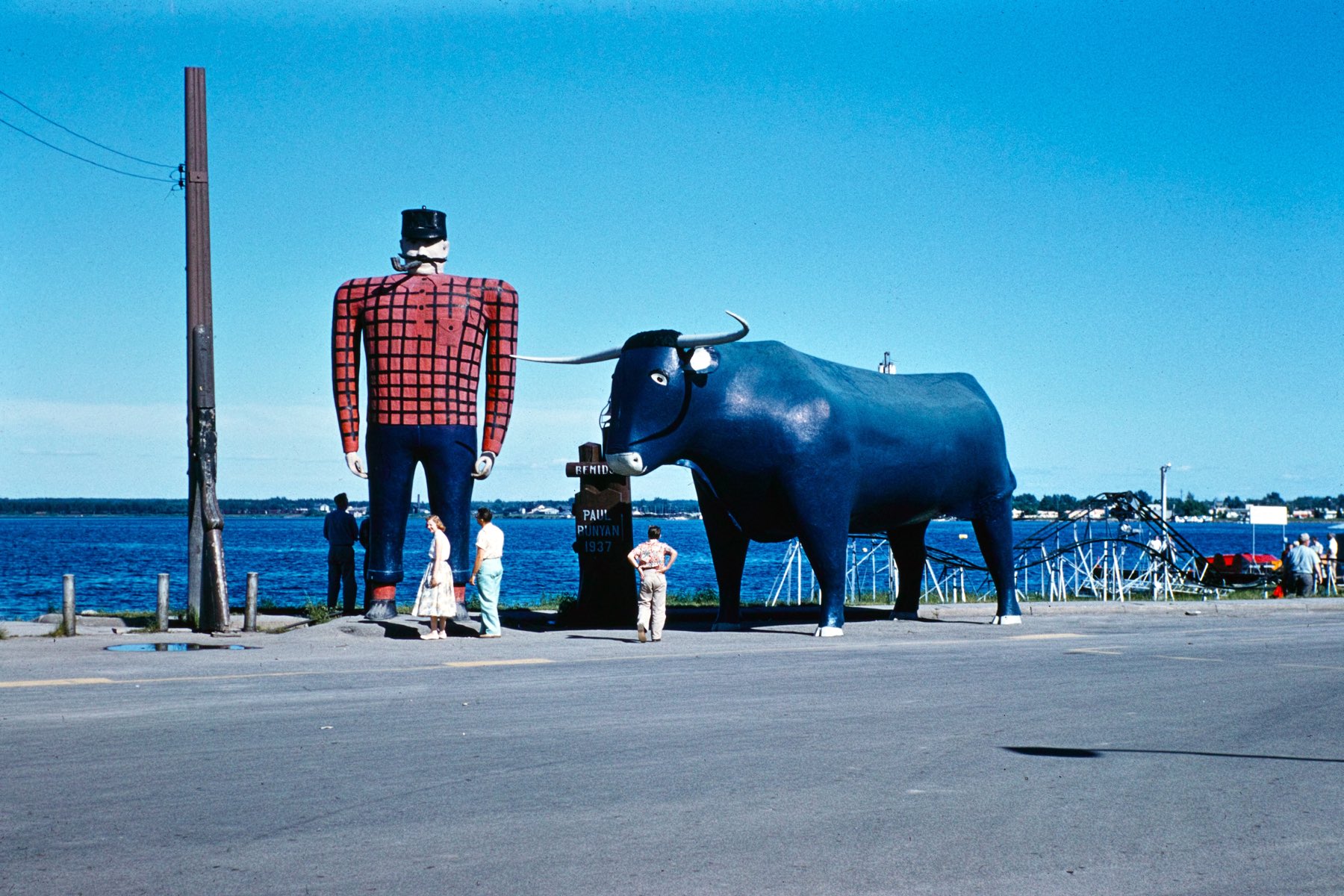 Tourists stare in awe at the size of our national hero.Bemidji, MN - 1957

The responsibility of providing high quality, high production on a large scale in logging often created great engineering difficulties that had to be overcome. When advisors to the lumber industry saw epic landscapes of towering white pine, devoid of civilization, they would knowingly shake their heads and conclude, “Better send for Paul Bunyan.” Paul wasn’t just working in the lumber industry, he was the lumber industry, and for many years.

Always the butt of the joke, “How’s the weather up there?”, people will forever remember Paul Bunyan for his immense size and vitality. He had the strength of 50 men and could fell several mature trees in a single swift chop of the ax. Because of his physique, Paul could have chosen the life of a bully, pillaging and plundering throughout this great land in self-serving debauchery. He could have oppressed those weaker than him, built an empire and crowned himself supreme leader. He could have seen his smaller people as inferior, lesser human beings that should worship the very ground he walked across. But instead, he embraced a way of life caring for his fellow man and cultivated America’s growth in a time that certainly needed it.

Bunyan traversed the country end to end expending his might and heroism to the benefit of his lumberjack disciples who looked up to him, and not just because he was tall. Paul embodied the qualities of hard work, determination, loyalty, friendship, and kindness. He would often be found helping others—a defining characteristic—and never considered himself first. There is so much for us to learn from Paul’s generosity and adopted lifestyle.

Paul Bunyan’s greatness has never gone unnoticed. A myriad of towns throughout the country have erected monuments in his honor because of the positive impacts he made in those communities. Some 200 roadside statues exist in America. Even his name and portrait are used by businesses throughout the country as a means to convey honesty, dependability, and goodness in the products and services the business provides. 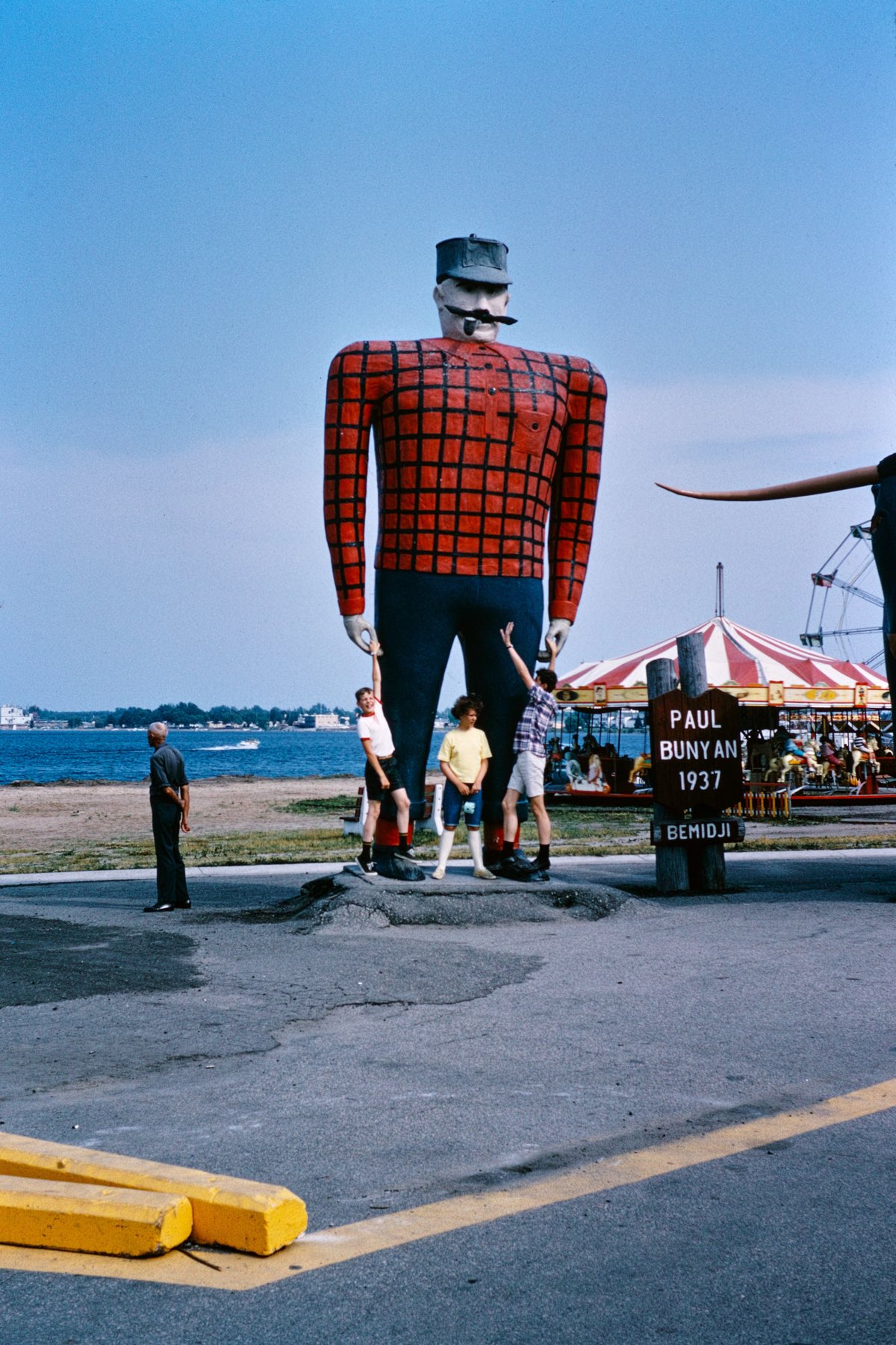 Not surprising, Paul was also deeply compassionate about animals. He had originally found Babe the Blue Ox nearly frozen to death during that cold Winter of the Blue Snow. Without thinking, Paul quickly brought the animal to the safety of a campfire to de-ice. Once thawed, the bovine locomotive became a close companion of Paul Bunyan and stayed near his side for the rest of its years.

Americans work more than any other developed nation in the world so it would be fitting that our idol showed the same trait. Saviors in other religions might perform a handful of miracles here and there, but many were lazy as individuals, wandering freeloaders preaching their beliefs but making all attempts to avoid physical labor. Work is mandatory for progress. Paul Bunyan’s employment as a lumberjack consisted of the blue collar manual labor that common folk could more easily relate to, and thus follow.

And then there’s the most unforgettable thing of all, Paul’s trademark attire. Who could forget the familiar red flannel and blue jeans? You can’t get any more American than that.

Learning of his larger than life adventures, some might question if Paul Bunyan really existed. Good heavens, of course He did! How could anyone ask such a thing? It pains my heart to think learned scholars, lovers of historical fact, lower Mr. Bunyan’s existence into the cesspool of American folklore as if He were some cheap joke Americans use to amuse themselves with as they inebriate their senses at the local saloon. To question the veracity of Paul Bunyan’s life is to commit a naive breach of unspoken etiquette when one only needs to look around to see the results of His work. 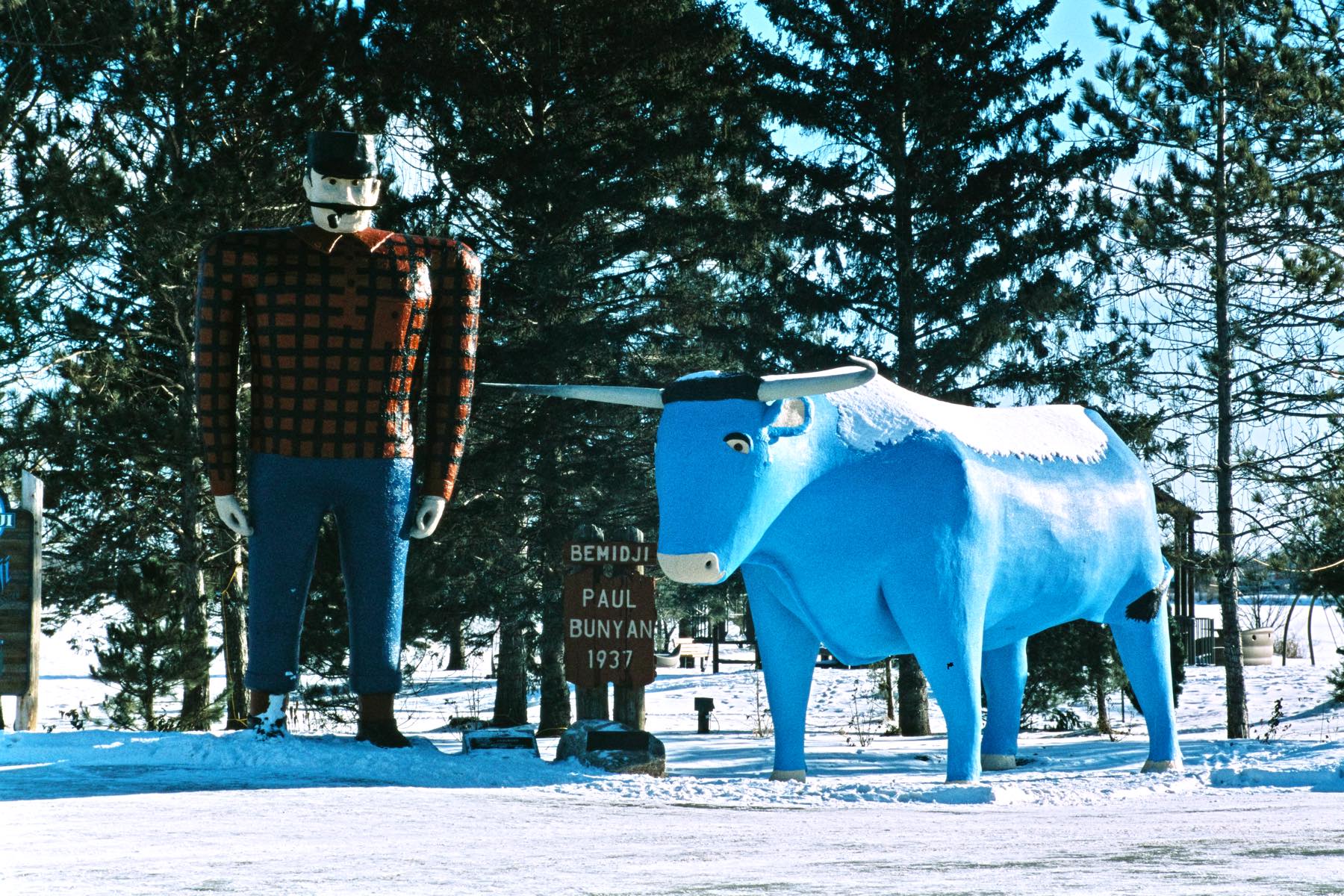 Paul and Babe patiently wait for the springtime thaw.Bemidji, MN - 2016

Well qualified geologists will tell you the Grand Canyon, as we know it today, is at least 5 to 6 million years old, the layers of sediment and rock samples providing the hard facts. But this can’t possibly be true when you consider the Earth is only 6,000 years young. The vastness of the Grand Canyon could only have been created by Paul Bunyan absent-mindedly dragging his heavy ax behind him, slicing the Earth open like a hot lightsaber through the soft underbelly of a tauntaun.

Further evidence of Paul Bunyan can be found in the Great Lakes themselves. Paleoclimatologists and geologists alike will make exaggerated claims of a mile thick sheet of heavy glacier ice scraping itself across a region affected by an ancient magma plume that stretched and rifted the crust apart. The mighty ice sheets are assumed to have excavated the leftover soft sedimentary rock, carving a lakes basin so epic it’s been described as the nation’s fourth seacoast. All of this supposedly happening over a billion years, if you can believe that. Bullocks, I say! The constraint of timescales just don’t fit within the bounds of certainty. It was Paul Bunyan who dug those watering holes for Babe as they worked their way across the country, and that’s that.

And then there’s the science of ecology which attributes wildfires and insufficient precipitation as the leading cause of the woodless areas covering the Midwest’s prairie peninsula. Rubbish. Paul Bunyan was the lumberjack who logged the timber clear off that region, stumps and all.

Paul Bunyan Day is held annually on June 28, but we can surely do Him better by setting aside one day each week to remember Paul and the work He did to make our lives better. The day of remembrance would have to be a Monday or Friday, the creation of a 4-day work week would boost productivity. Everyone loves productivity, right?

Then, a team of authors working independently of one another shall compile Paul Bunyan’s scripture, and if they blend fact with fiction it matters not for above all else is the mission to spread this new American creed.

With the help of print-on-demand services, well-dressed individuals will go door to door peddling the Bunyan dogma to the docile masses, upselling them on the false grandeur of nationalistic pride. As people begin to jump ship, it will become pertinent to start a formal club where excerpts from Paul Bunyan stories are read aloud (in a pedophile free zone) to assemblies by someone fluent in His discourse. Afterward, the congregation will be heard singing Paul’s lumberjack campfire songs in peaceful unity and feel as if they’re being lifted to a higher level.

Looking back at Paul Bunyan’s life, his unlimited goodness and the prospect of spreading the faith makes me want to stand on top of a mountain with arms outstretched, jazz hands to the sky, shouting, “I love you Paul Bunyaaaaaaaaan!”