Everyone wants to be creative, to conceive great ideas, and to achieve unparalleled beauty in their aesthetic self-expression. Being creative allows us to break free from established patterns, to see things in new ways, and to drive change in the world. And the fluffy drama of clouds may be one entry point into this terrific human experience.

An untold number of school children have gazed idly out of classroom windows, their small thoughts arrested by the magic of clouds billowing in the skies above. The loss of attention can’t be helped. We feel taken in, charmed, even mesmerized by the fluffy drama unfolding from nature’s most captivating phenomena. The best days of summer are those spent watching the skies come alive with the playful existence of clouds.

Aren’t clouds beautiful? They look like big balls of cotton. I could just lie here all day and watch them drift by.Lucy Van Pelt, the class bitch from Charles Schultz’s Peanuts

If we succumb to the persuasion of cloud-watching our imaginations would drift into reveries of unattainable fantasy, of hitching a ride atop Falkor the Luckdragon and rocketing across these lighter than air apparitions as if he were a trackless roller coaster fueled by cocaine. Or we might consider squeezing ourselves into skin-tight Kryptonian fabric and flying through these majestic pillows of vapor ourselves with nothing more than clenched fists and willpower. You know, the study of clouds is a daydreamer’s science. 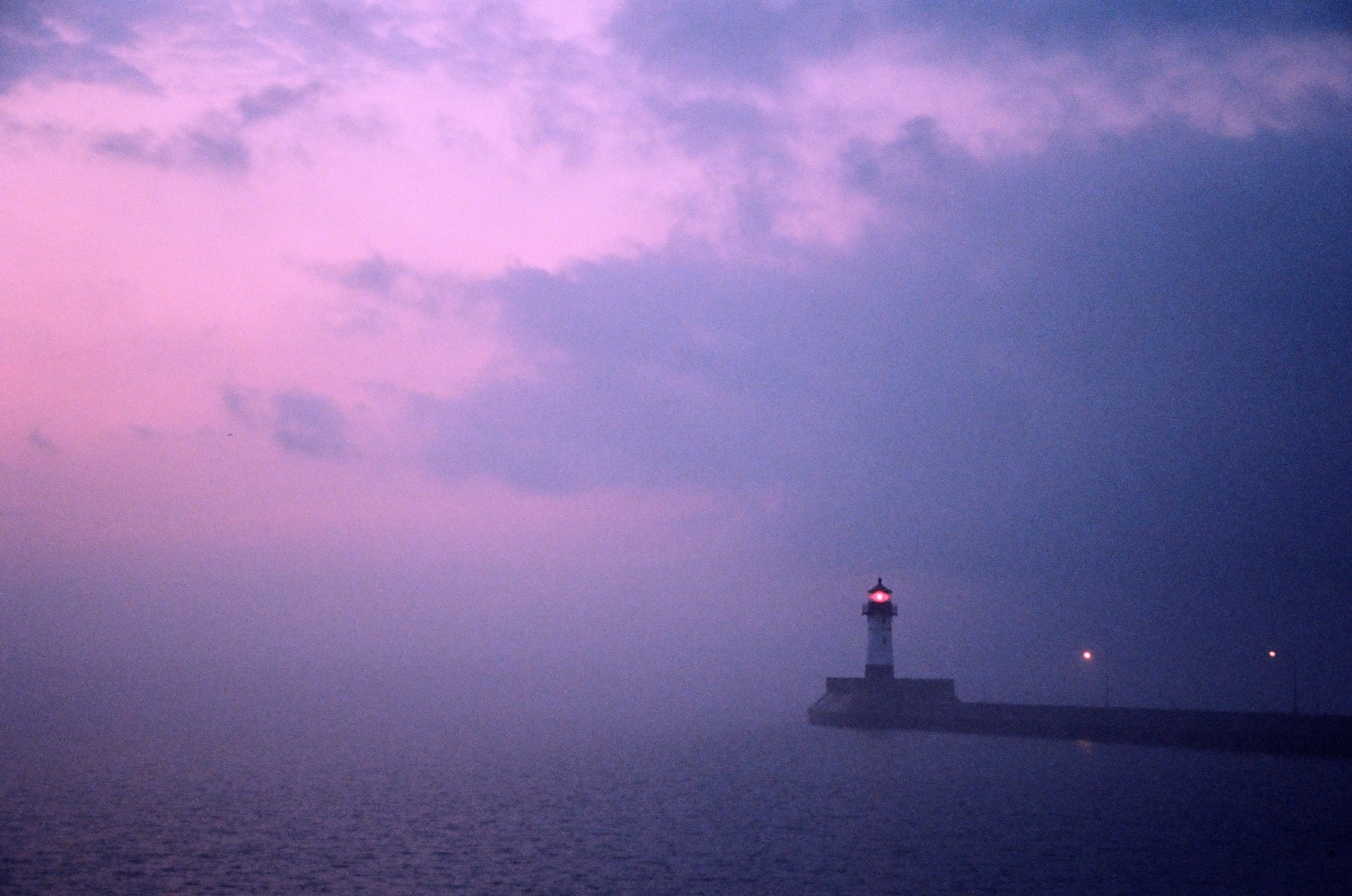 Quiet mornings, just before sunrise, are the best moments to witness the color and clouds come alive in the sky.Duluth, MN

It was amateur meteorologist Luke Howard who first distinguished cloud from cloud in his On The Modification of Clouds essay, first published in 1803. He identified three principle cloud types based on their fluffy exteriors, to which he assigned the Latin names Cirrus, for diverging fibers, Cumulus, for conical heap, and Stratus, for horizontal sheet. He then recombined these classic designations into a series of compound names, like cirrostratus and stratocumulus, to accommodate the ever-changing shape of clouds.

The constant transformation of clouds and their fleeting nature are like poignant metaphors for life itself. We’re here for a moment, gone the next, and in our lumbering travels through space and time we wish we could just be whatever it is we wanted to be, to go on existing and nothing more. It’s the inefficiencies of modern living that breeds anxiety and the burden of always having to rush to get things done. Citizens of the world would rejoice from legislation or religion that required an hour of cloud-watching per day—just to reset our temperament for living. 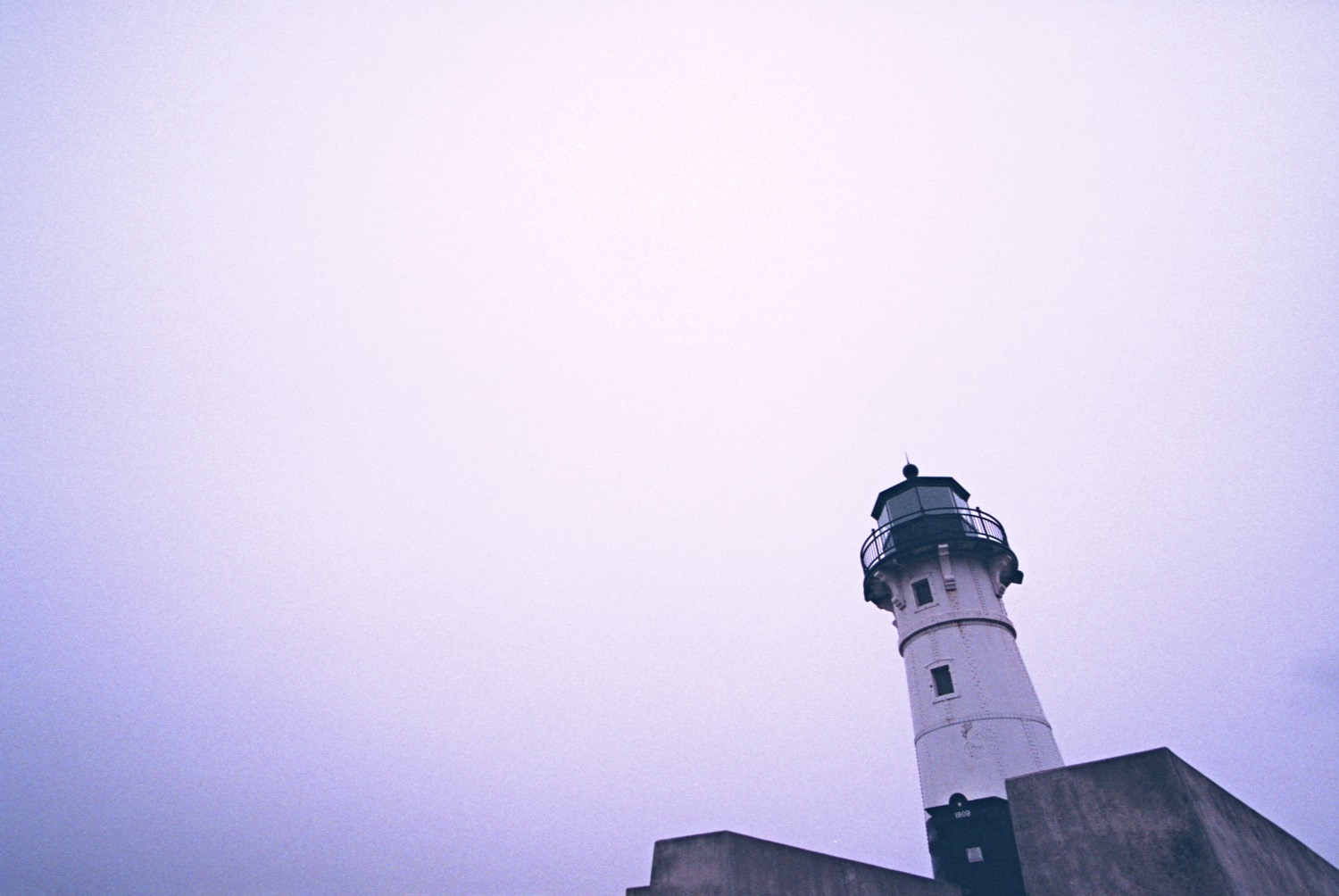 To become aware of clouds is to slow down. The effortless serenity in clouds, their soft features and leisurely motion, has always satisfied our longing for grace and beauty. A world without clouds would be immeasurably boring. Nothing would be more repulsive and dull than having to stare at the same lifeless sky day after day. It’s the presence of clouds that keeps the outdoors interesting, and life as well.

##The Benevolence Of Cloudy Days

Rainy days are only dreary because we make them so. The naive masses have convinced themselves that happiness and joy can only be achieved through sunshine and good weather. Naturally, the mistaken belief has weaseled its way into the English language as obtuse idioms like, “Rain on one’s parade” or “under the weather”. We even draw dark clouds of melancholia over people who are depressed or in low spirits. But poor weather doesn’t have to be the turd in the ice cream that spoils our day. In fact, many people find the soft, pitter-patter of rainstorms soothing and refreshing.

Clouds are not something to moan about, far from it. They are, in fact, the most diverse, evocative, poetic aspect of nature.Gavin Pretor-Pinney, founder of the Cloud Appreciation Society

How does the weather affect us when we’re not thinking about it? Deeply it seems. Social psychologists at the University of New South Wales, Australia, conducted field research to determine if weather had any effect on memory. Small ornamental objects were placed on the checkout counter of a suburban stationary store, and upon exiting, random shoppers were asked to recall as many items as they could. Their results, published in the Journal of Experimental Social Psychology, revealed people could remember three times as many trinkets on cloudy days than on sunny days.

There’s something about grey skies and gloomy weather that turns us inward, allowing us to think more clearly and effectingly. It’s possible that human consciousness evolved an ability to get through poor weather by responding with mindful exploration, thus allowing our senses to become more perceptive to our inner self and to our environment. We might even go so far as to conclude good weather blunts our cognitive function for there is no reason to think surely and carefully when all is well.

For shits and giggles, though, let’s pretend cloudy days really are the catalyst for our feelings of melancholy and misery. Yeah? So what? The psychoemotional breadth of our mental states — the highs, lows, light, and dark — are what define the bright spectrum of human experience. Sidestepping any of these emotional hazards robs us of the capacity for living a full life. For without the flood of human emotion, we are left with a shriveled culture lacking of the rich creative arts that have always defined the culture and time in which we live.

Time spent “under the weather”, as they say, has been the most compelling impetus for the creative restlessness found in the past’s most illustrious artists and creators. Sure it sounds counterintuitive, but where would the world be without the agitations of the soul? The heartbreak love songs of Willie Nelson, Prince, and Katy Perry? The mental anguish of Pollock and van Gogh? The highs and lows of Cobain and Beethoven? The substance abuse of Fitzgerald and Hemingway? The personality deviations of the world’s most influential creative types have always been sourced from the wild emotional states we strive to avoid. 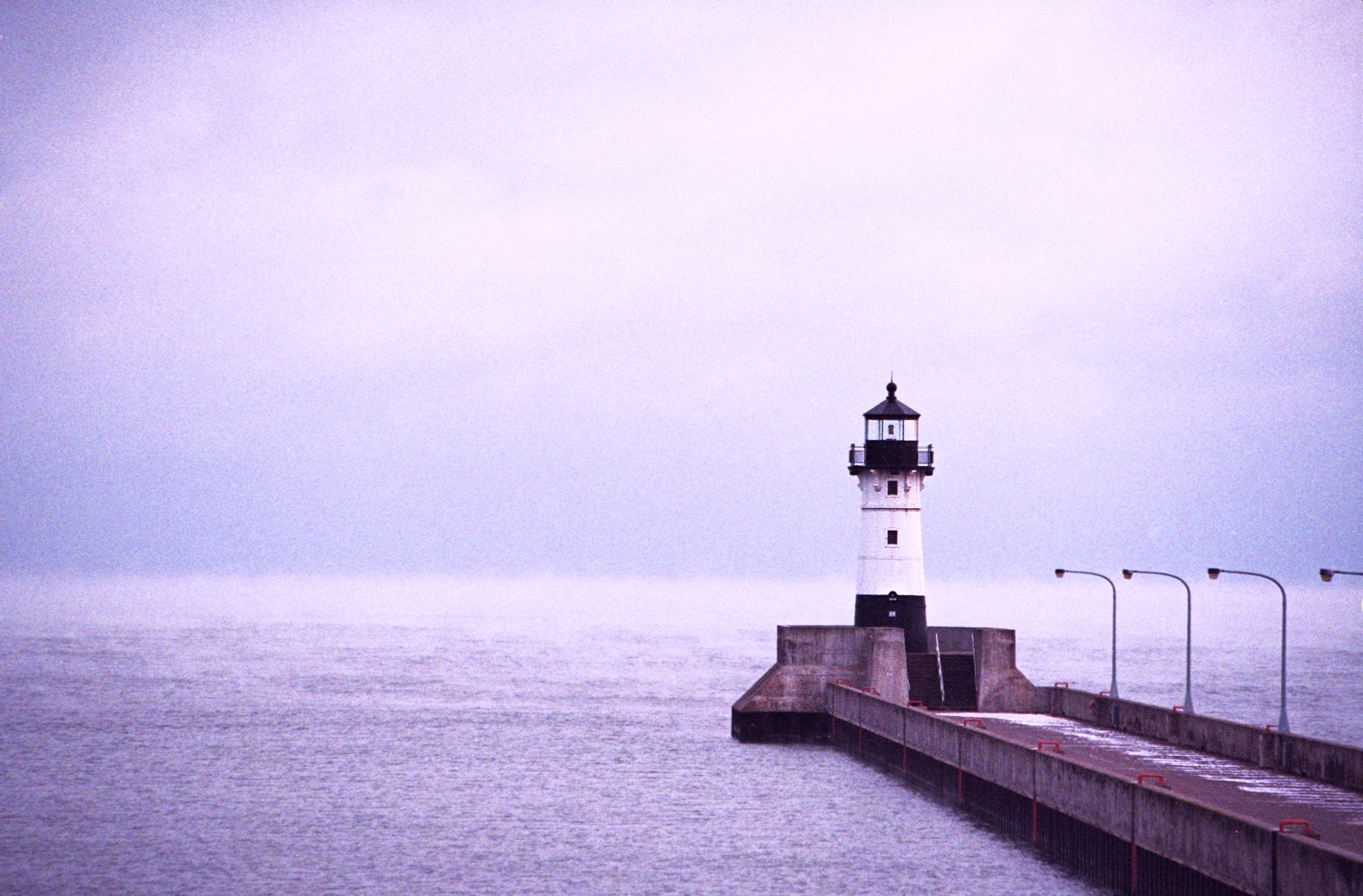 Cloudy days turn us inward and cause us to reflect on what we know and what we want to.Duluth, MN

The importance of creativity is something that cannot be over-appreciated. Creativity allows us to break free from established patterns, to see things in new ways, to solve problems, boost innovation, and to drive change in the world. Most of all, creativity is the one thing that makes people and culture interesting. Creativity is not just a “nice to have” but a cultural necessity, and we need to figure out how to have more of it.

##How Great Ideas Are Born

Everybody wants to be creative, to conceive great ideas, and to achieve unparalleled beauty in their aesthetic self-expression. This is true whether the act of creation is for the unpatronized applause and recognition of others or whether the work is simply for the joy of reaching one’s full potential. But either way, creative dexterity isn’t something that can be bought. There are no self-help books or Limitless Life supplements that produce creativity—not that this is a big deal. Everyone has the capacity for this coveted skill, but few reach the end of life with their creativity fully explored.

The most regretful people on earth are those who felt the call to creative work, who felt their own creative power restive and uprising, and gave to it neither power nor time.Mary Oliver, Pulitzer Prize winning poet

All creative work begins as an imitation, as a rudimentary copy of another’s work, lacking every bit of individual character. Then, through the influence of our personal experience and a focused effort, our thoughts eventually ferment into the novel ideas we call creative. Our subconsciousness minds are what do the work. The vast unknown depths of our hidden psyche combines and recombines knowledge, wisdom, memories, bits of information, pieces of make-believe, sparks of inspiration, and all other existing thoughts into new, unabashed shape and form.

Einstein defined this general process as “combinatory play” and believed it was essential for a person’s productive reflection. Oliver Sacks, the esteemed British neurologist, and poet of science, stated that creativity involves years of conscious preparation to allow the subconscious assimilation and reorganization of one’s influences into the synthesis of new ideas. T.S. Eliot, the venerated writer and Nobel Prize laureate, also suggested this in The Use of Poetry and the Use of Criticism—that creativity needed an incubation period, like an egg, during which time the unconscious processing of existing knowledge would hatch into novel ideas when ready. In a 1996 interview with Wired Magazine, Steve Jobs stated, “Creativity is just connecting things. When you ask creative people how they did something, they feel a little guilty because they didn’t really do it, they just saw something. It seemed obvious to them after a while. That’s because they were able to connect experiences they’ve had and synthesize new things. And the reason they were able to do that was that they’ve had more experiences or they have thought more about their experiences than other people.” 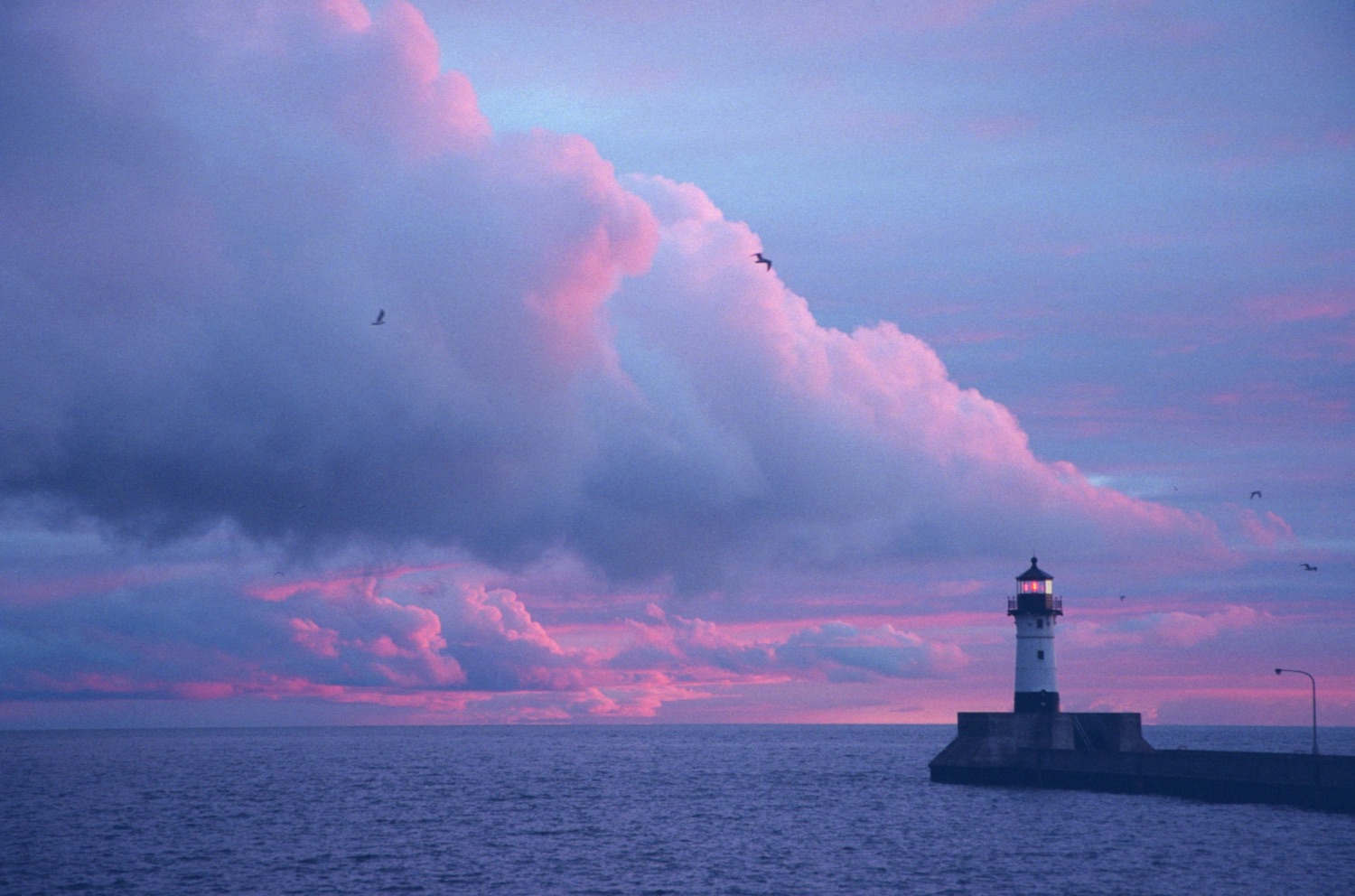 A sky without clouds is utterly boring, and we can say the same about life as well.Duluth, MN

The mind must be filled to the brim with knowledge and experiences to maximize the recombination process. To do this we must follow the irregular footsteps of a polymath. Learn unrelated disciplines and let the disconnected ideas cross-pollinate each other. Become fluent in cryptography and blend it with the mathematical beauty of sheet music. Study the engineering proficiencies of termites and redesign human habitats. Draw out the sacred geometry of Venus’s perceived orbit around the Sun and construct magnificent Church edifices.

Creativity knows no boundaries. Connect dots, draw lines, and steal from others. The more we know, the more we fuse, blend, mix, and merge into new ideas. Immerse yourself in melancholia, think deeply, and be creative.