How To Collect Baseball Cards

Baseball cards are a cheap and frivolous commodity born from the greedy compulsion of profiteering. But learning how to collect these pieces of cardboard correctly opens the doors for transcending the ordinary and putting together a collection that symbolizes something meaningful, the individual.

Some people think baseball is boring, as if nothing were more wretched than having to spend an entire afternoon watching a professional sport where doping is so widespread yet the only physical contact deemed necessary are the congratulatory butt slaps. So we have to wonder what could make the game more exciting and bedazzling to television audiences across the country. There has to be something better than a pretentious Kenny Powers’ firework display to light a fire in people’s hearts.

Every kid between the ages of 8 and 12, living in rural America, played baseball during summer break and were all keen for these heckles and cries of derision. The hootin’ and hollerin’ was as much a part of the game as Creatine and Big League Chew. It breaks my heart to see television censorship sucking all the life and tradition out of our National Pastime. 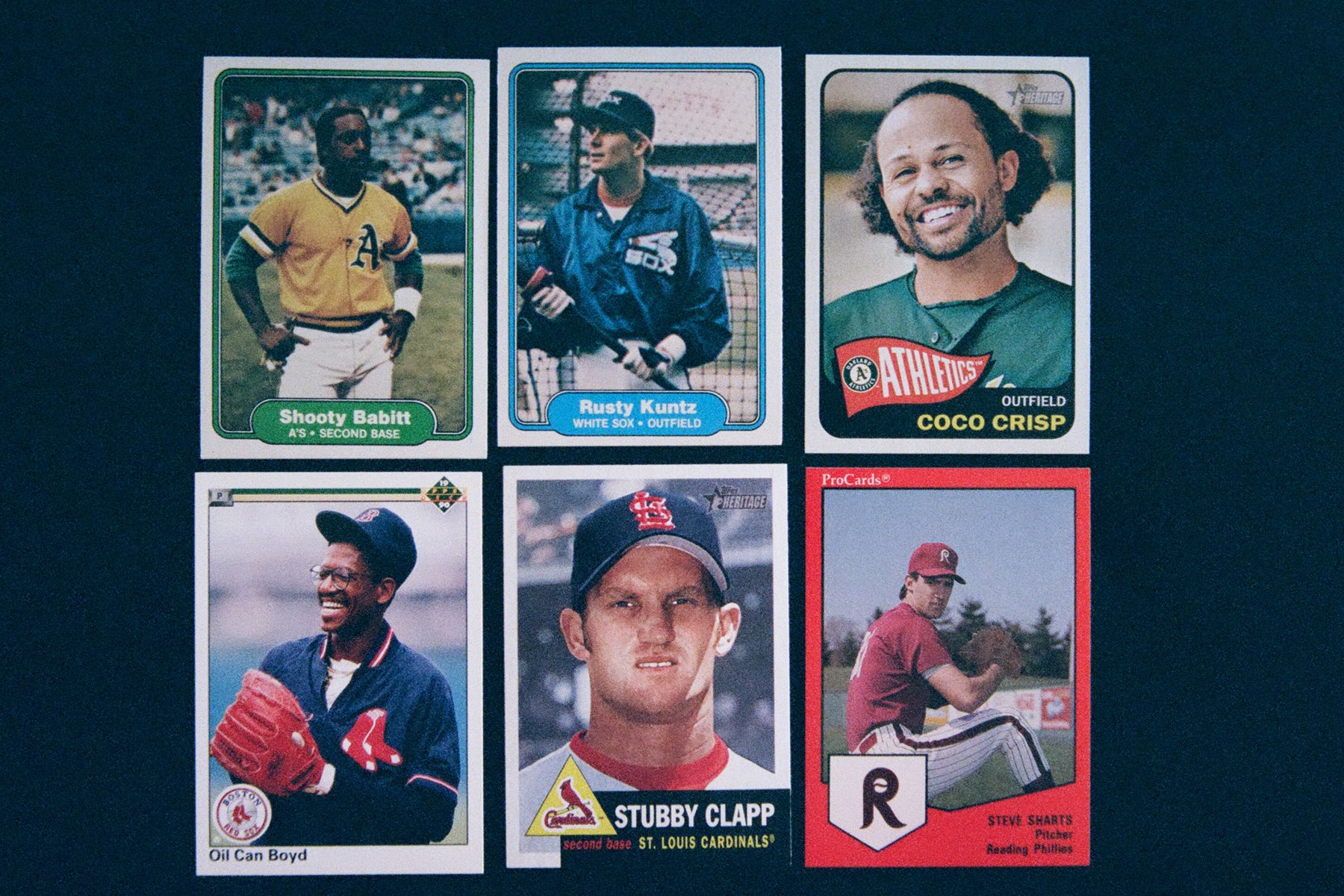 When I think back to all those Little League years, there is another thing that brings forth warm feelings of remembrance, the baseball cards. It was always fun to see the accomplishments of the game’s greatest athletes abbreviated into small, pocket-sized pieces of cardboard. Any desire to collect these fragile treasures was probably due to some caveman instinct for hoarding still imprinted in our subconscious minds, but damn, were the mechanisms of card acquisition inefficient.

Kids had to buy cases and cases of wax packs, continuously throwing away duplicates, in endless searches for cards we actually wanted because Topps, Donruss, other baseball card manufacturers had created artificial scarcity by deliberately limiting production of their commodity so there weren’t enough relics, refractors, parallels, serially numbered, or autographed inserts to be divided equally among all collectors.

Normally, this business conduct would be seen as exceedingly rude and entirely unacceptable, but in the case of baseball cards, a contagious zeal is thus added to the trading card game from the limitless possibilities contained within the obscurities of a sealed wrapper. To kids and impassioned collectors, an unopened wax pack glimmers with an untamed, humanly-divined beauty that can only be understood by unwrapping a pack of 1952 Topps baseball cards yourself. For within each packet lies the heart-pumping prospect of attaining the impossible, finding that “one” which makes your hair stand on end, your bowels empty, and your eyes stare in disbelief at your sheer dumb luck. 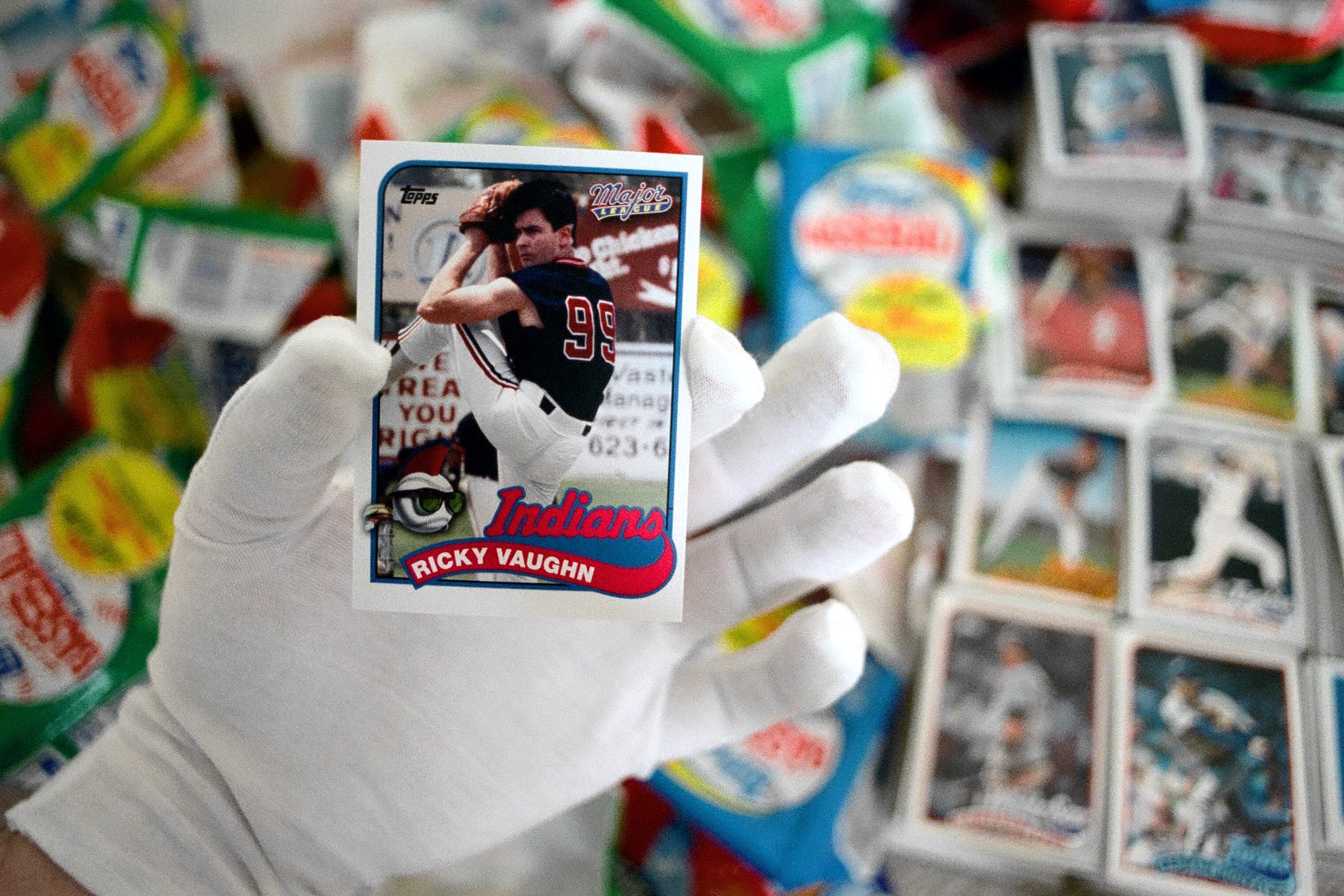 Unwrapping "the one” makes your hair stand on end, your bowels empty, and your eyes stare in disbelief at your sheer dumb luck.Ricky Vaughn, 1989 Topps Baseball

However, like all things we insist on owning, the value of a baseball card can only be measured by our perceived value of the thing. And while some of us had the means to collect a great many cards, we all had that one we couldn’t find.

Back in the 1950s and 60s when money was worth more, kids could buy 1-cent, 5-cent, and 10-cent packs of bubble gum from vending machines or the local five-and-dime. Each packet contained a single or varying number of randomly inserted baseball cards which could be collected, traded, or clamped to the rear of a bicycle frame so when the spokes of the back wheel turned, it sounded like a kick-ass dirt bike. 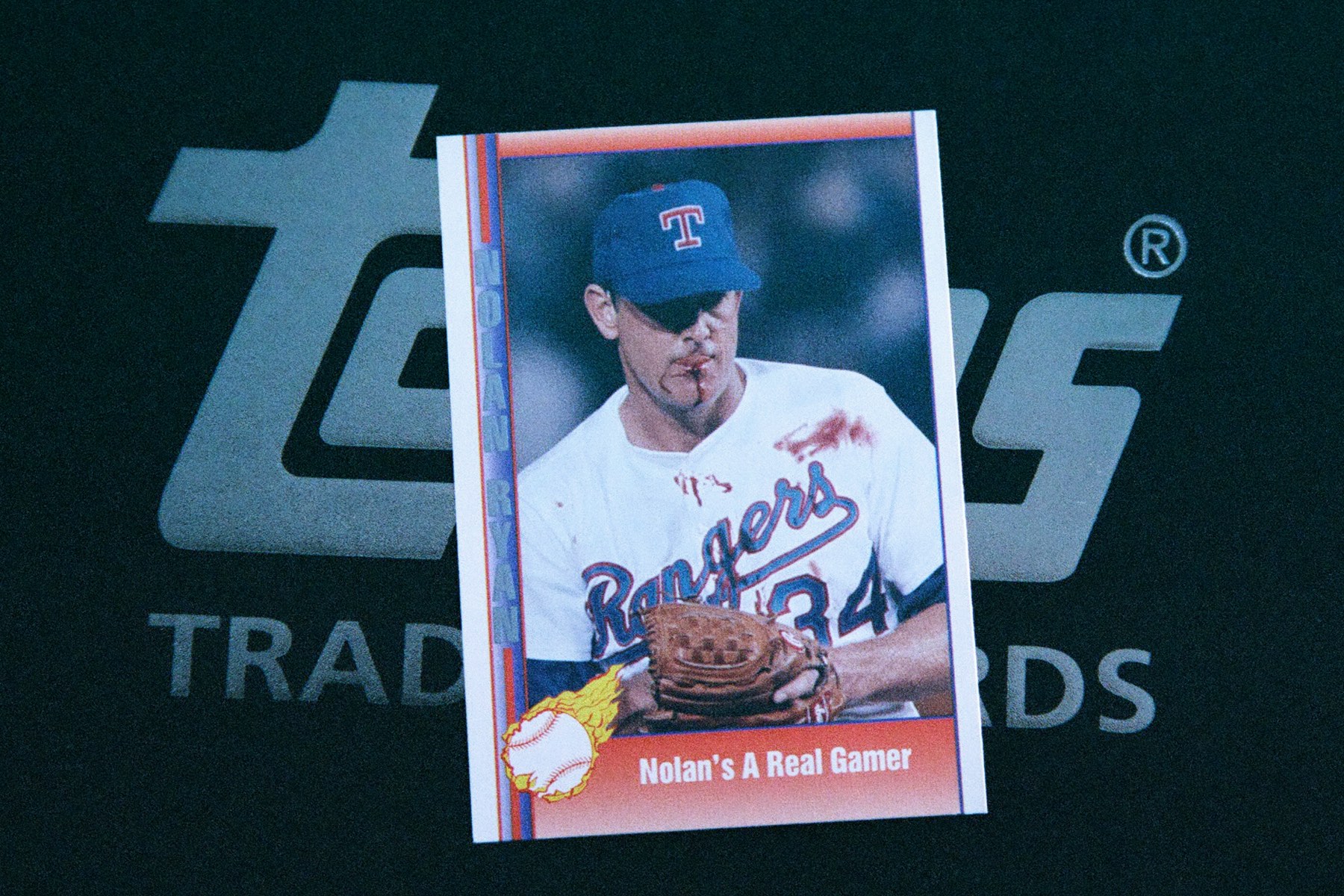 Some baseball cards have an indescribable quality about them that you just can't quite put into words.Nolan Ryan, 1991 Pacific Trading Cards

For those who collected cards, the joys of deliberate scarcity and inequitable distribution left us with immense irritation from the extended searches for specific cards we needed to complete our sets. This chagrin of card collecting was illustrated with a minimalist proficiency by Charles Schulz in a Peanuts strip published on April 12, 1964. Readers played witness to Charlie Brown’s wishy-washy attempt to unwrap a picture card of his favorite ballplayer from a heaping stack of bubble gum packets.

The strip opened with Charlie Brown striding down the sidewalk as determined as ever, waving a fistful of dollars at Lucy’s presumptuous face. “See this five dollars?” he said. “I’m going to spend it all on bubble gum cards! I’ve got to get a picture of Joe Shlabotnik!”

At the nearest variety store, Charlie purchased 500, one-cent penny packs and opened the load of them under Lucy’s curious gaze. His anxious little hands tore through each wrapper. Perspiration leaped off his brow with each opened pack. In the end, the card wasn’t found. Charlie Brown’s most ambitious attempt had failed. All he could do afterward was throw his stubby little arms into the air and wail, “Five dollars’ worth of bubble gum, and not one Joe Shlabotnik!” 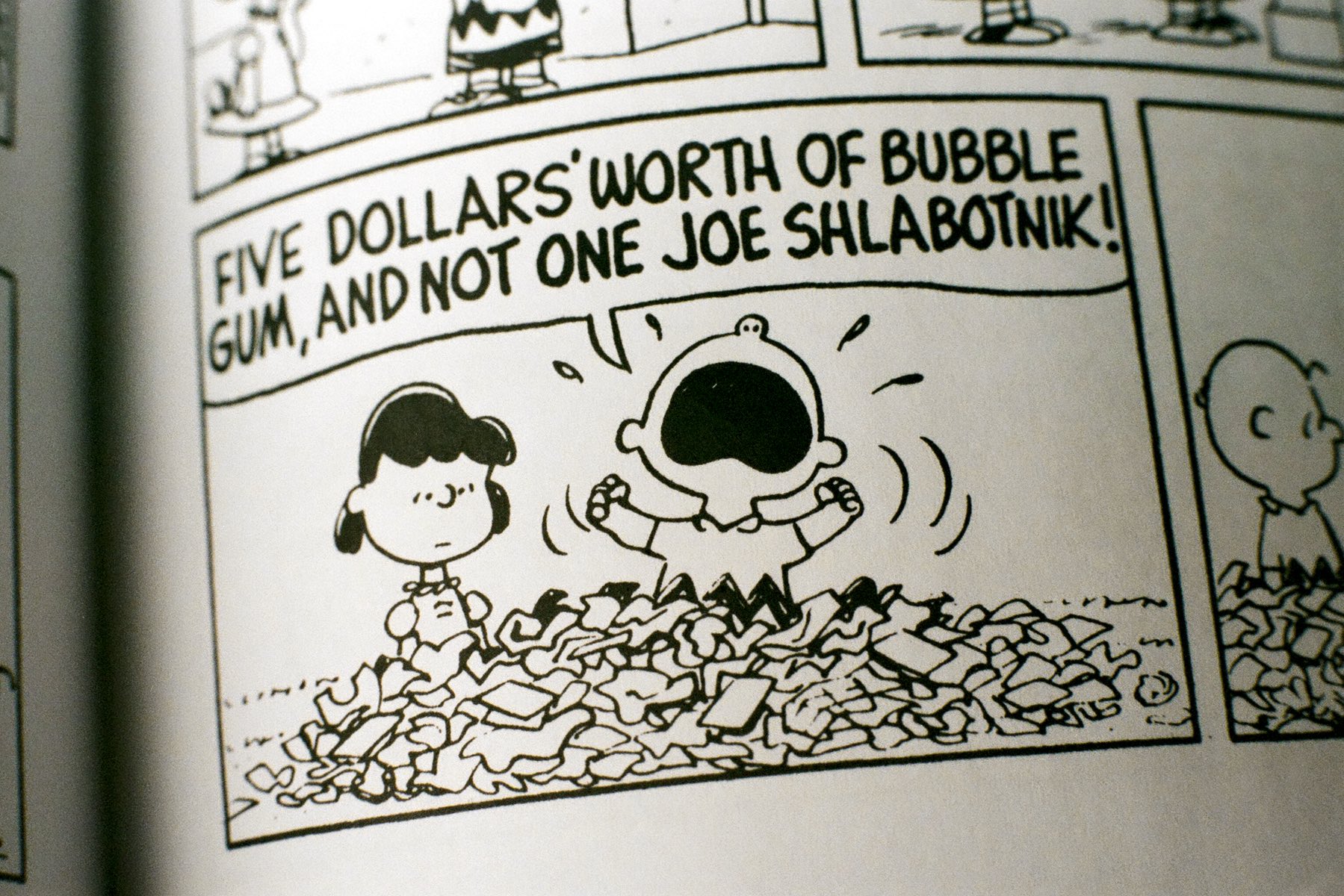 Now, I know what you’re thinking. What the hell, right? Five dollars in 1964, for a kid, was probably the six-months allowance he stockpiled over winter. To blow it all in one shot and fail so miserably must have felt like a kick in the balls.

Why didn’t Charlie just post a newspaper ad for the Shlabotnik? He could have traded the card for a dollar and spent the rest of his stash on peep shows and ice cream cones. No, duh. Of course he would have considered that. But understand that the greatest pleasures gained from collecting baseball cards is always found in the hunt, not in the cards themselves.

There’s an immeasurable excitement in the unknown. Walking out of a dime store with an armful of wax packs holds an indescribable thrill for kids. The suspense vibrates throughout their little body and shakes their conscious being with the knowledge that there is more to life than just cold cereal and staying up past bedtime.

A Card Collection is a magic carpet that takes you away from work-a-day cares to havens of relaxing quietude where you can relive the pleasures and adventures of a past day — brought to life in vivid picture and prose.Jefferson R. Burdick, father of card collecting

Humans crave experiences. We want to live our lives in anticipation, collecting stories and warm memories along the way. Charlie Brown’s failure to unwrap his coveted baseball hero becomes a good story, and it’s this slice of life, defined by his lavish card shop purchase and balloon popping emotion, that will endure in his memories forever.

If we’re to learn anything from Charlie Brown’s defeat it’s that each day should be lived to its maximum while searching for life’s brief moments that moisten our unquenchable thirst for adventure. The passionate pursuits of our Shlobotniks will always grant us great stories to tell. But trading cards as an aggregated whole represents more than just mere adventure. When done correctly, a proper card collection will always reflect the charm, charisma, and character found in the unique individuals who made the efforts add each card to their collection.

Being yourself in a world of industrialized conformity is the hardest battle we as individuals will ever have to face. All societies throughout history have, for better or worse, pushed civil obediences onto their people. The consequence of which has led citizens to grow into scared little copies of each other, too fearful of any dissenting thoughts, feelings, and opinions. Their sheltered lives relinquish all independence to the chronic groupthink of crowds. But when they deny their own individuality they are, in effect, denying the right of individualism in others as well. 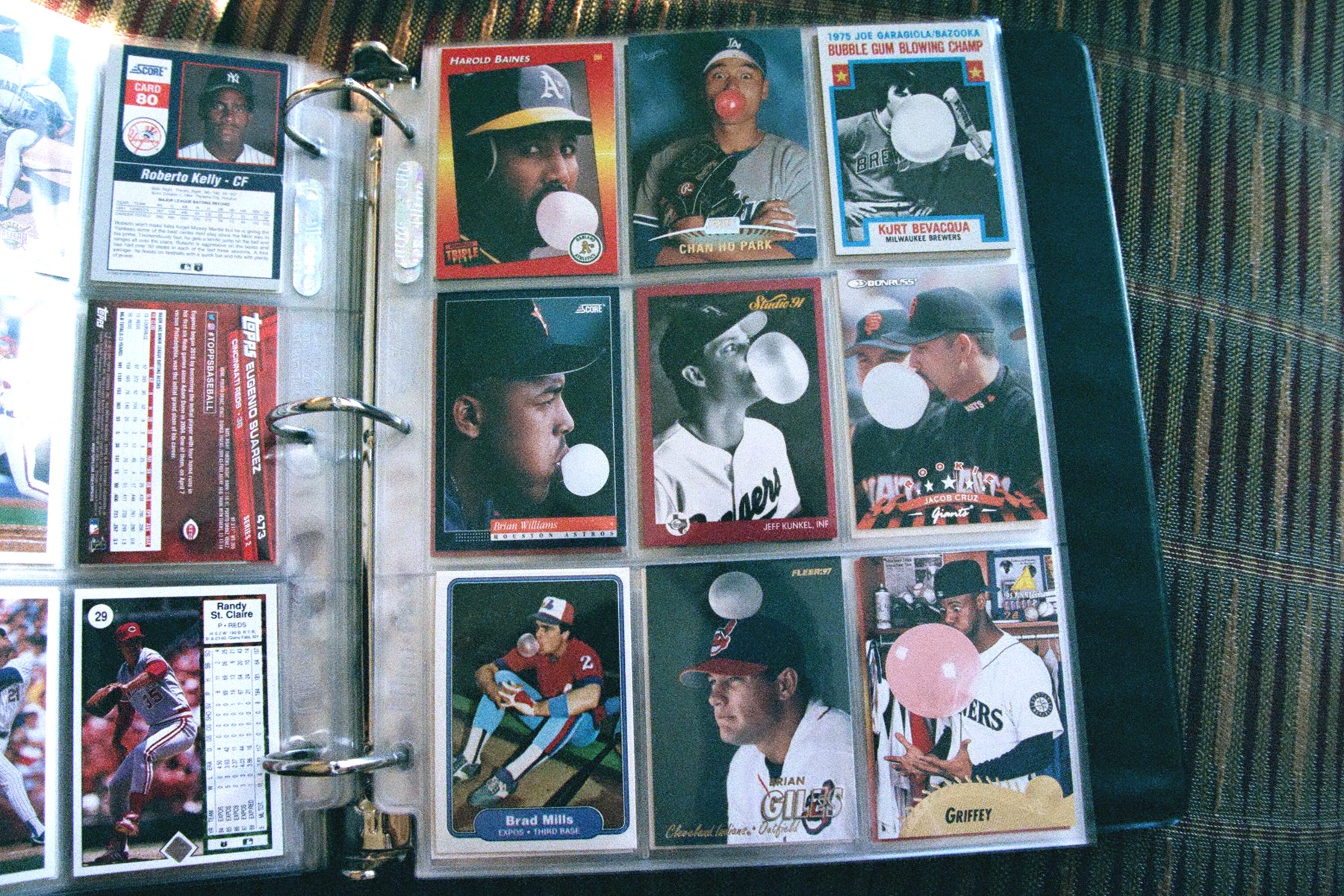 It was only after Beckett published its first Baseball Price Guide book in 1979 that kids and collectors conformed to the mindless footsteps of economic growth and could only acknowledge the diversity of baseball’s illustrious cardboard in the lowly material sense, as tasteless property that should appreciate like real estate or the stock price of weapon manufacturers. Because of this, we saw a barrage of cookie-cutter collections lacking all the idiosyncrasies of the individual.

When you adopt the standards and the values of someone else you surrender your own integrity and become, to the extent of your surrender, less of a human being.Eleanor Roosevelt, politician, diplomat, and activist

The ultimate freedom we have is the freedom to be our selves. The standardization of lifestyle and habit is a miserable proposition that’s only suitable for farm animals. Uniqueness, the essence of being human, is perhaps the only thing worth sharing with the world. And collecting baseball cards has the ability to reflect this thought with extraordinary flair.

So, let go of any investment, financial, and cultural expectations you might have and focus on what you want in a baseball card. If you corral yourself into a narrow search for complete sets, teams, or players, that’s fine, but don’t follow another’s path just because you can’t find your own. Just keep hunting. 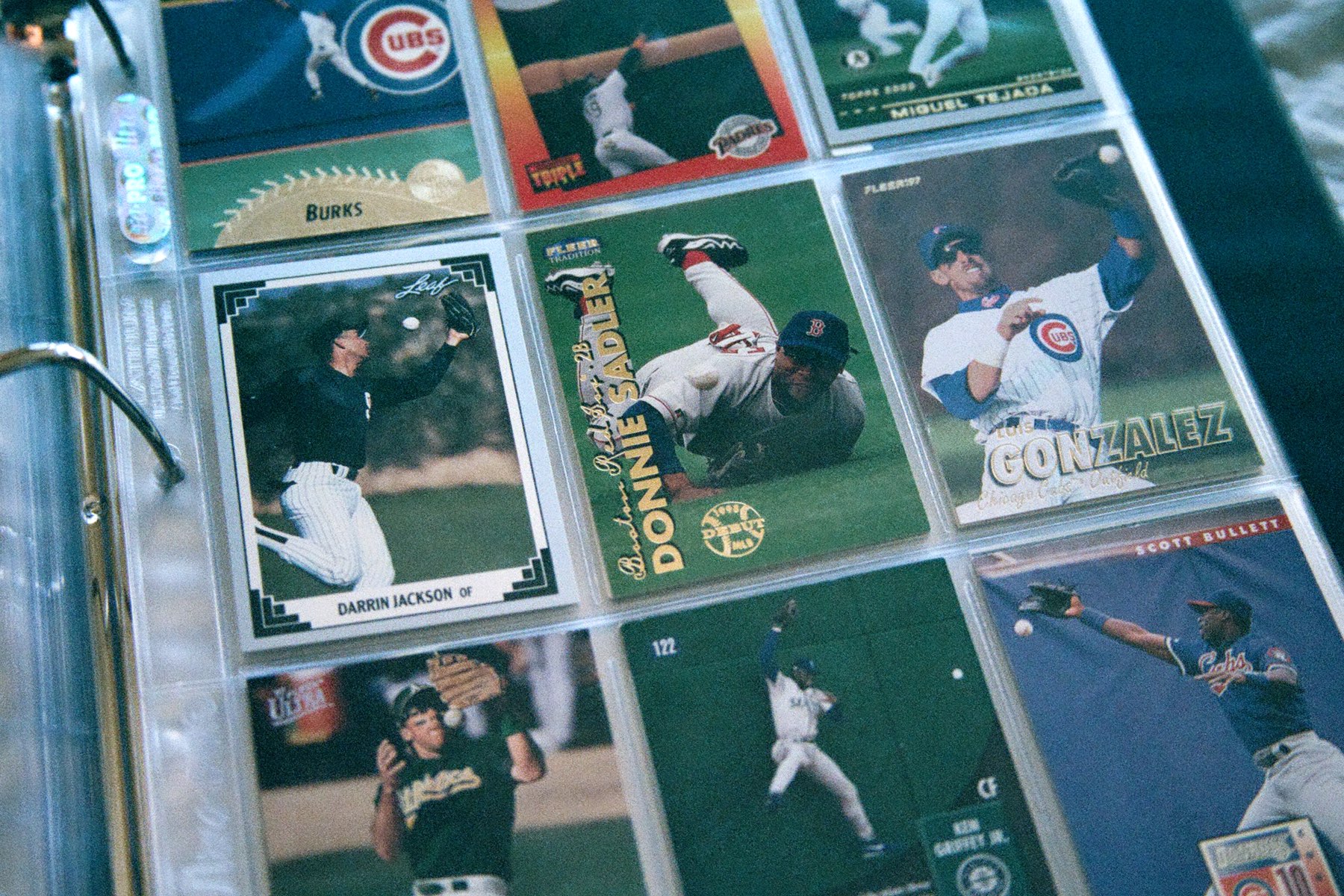 Did you know there was a category of baseball cards consisting of players missing fly balls?Selections from a cardboard connoisseur

Spend hours sitting in card shops riffling through boxes of common players in the search of the “one” that increases the merit of your own collection. Attend sports cards shows and autograph conventions. Meet other card collectors. Trade cards and stories. Cross state lines if needed. Give all of your being to your collecting.

Become a cardboard connoisseur, an admirable collector whose passion for finding the “right” card has turned him into an eccentric authority on baseball cards that goes beyond just Honus Wagner, Mickey Mantle, and Ricky Vaughn. His probing mind recognizes order and patterns in the chaotic medley of each year’s photographic captures. He sees a baseball card as a precious work of art, the creative marriage between photography, graphic design, and typography, each piece of cardboard conveying both an aesthetic and intrinsic beauty. 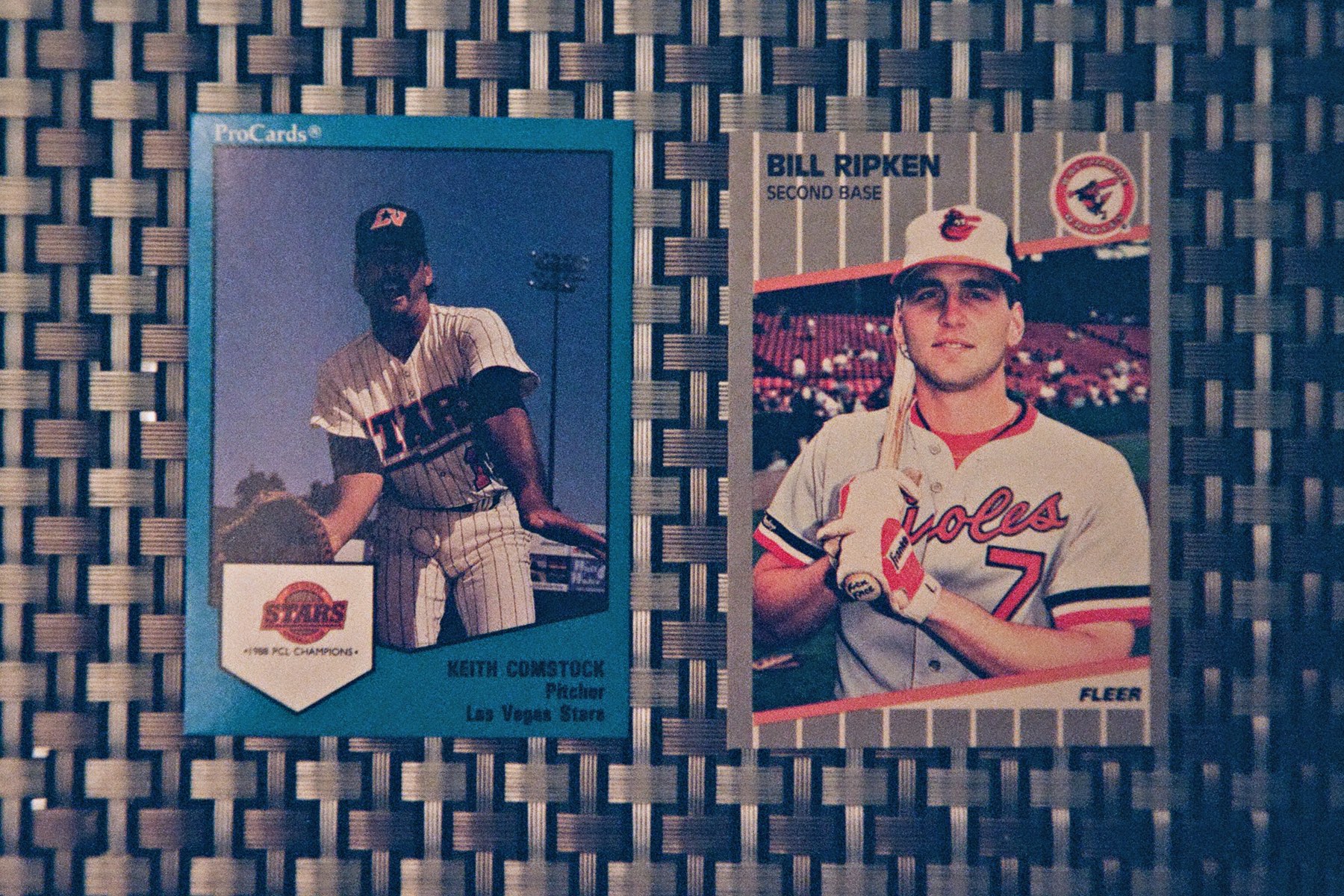 Billy Ripken's fuck face bat and Keith Comstock's shot to the nuts, baseball's two most valuable cards, though not in price but in prestige of ownership.1989 Fleer and 1988 ProCards

He might fill one 3-ring binder with cards of batters bunting; another binder he loads with before and after picture cards of steroid use; another is stuffed with players blowing bubbles with chewing gum. And so on. Why? Because for him, there’s a hidden playfulness of seeing the same scene repeated across multiple players, teams, and decades. There’s also an odd satisfaction in seeing others flip through the quirky pages of his binders and not really “getting it”.

Few can go transcend the philistine compulsion of profiteering and put together a collection that symbolizes something meaningful, the individual. A great card collection will always speak of individuality, and that, my friends, is how to collect baseball cards.