Mother Nature has railroaded her children atop the tracks of determinism and has only given us the facade of freedom. When we understand how we do not control our life narratives any more than a weather vane controls its own direction, then we can finally live a little dangerously.

Bill Shakespeare once wrote of life’s most bothersome quandary, “To be, or not to be?”, the well-known, but often misunderstood, imperative to living that begets compounding influence over our future self. The Laws of Reality, it would seem, have bound us to the dichotomy of decision trees and forced us to choose between life’s diverging paths. To fight or flight, to swim for a goal or to float with the tide, to let a neighbor’s dog poop on your lawn or to shoot it with a BB gun, a lifetime is chock full of these either/or decisions that take us further from our origins and fill our waking minds with all the woulda-coulda-shouldas of hypothetical possibility.

Each day we wake to a myriad of choices that send us careening in some odd direction where we’re met by more choices and more rudder pitching, and the only thing persisting in this tragedy of life is the hope that we are highly evolved, sentient beings capable of choosing the best possible paths for ourselves and living each day to its fullest. The discouraging fact, however, is that we spend most of our life half-awake on autopilot, rarely ever thinking of where we’ve been, where we are, or where we’re going. It’s only when exhaustion overtakes the safety of daily routine do we recognize the emotional fragility of being preoccupied.

For at some point in every person’s life, they reach middle age, look back upon their most spirited years and feel a blistering pang of existential neurosis. Their to-do list of experiences and achievements is far from complete but the passage of time suddenly claws at their conscious being as the realization that days, months, and years keep slipping away. The jarring vision of nowness shakes their benign contentment with one of two possibilities. Some will acquiesce to the shortness of life and learn to be happy with less. Others will wallow in apprehensive self-reflection, throwing away money on botox, breast and hair implants, marital affairs and sports cars in an all-out attempt to cure this apparent loss of identity.

Does the fact that we've all got to go one day justify living life on the edge? Who knows?Jammie Reynolds teetering on the edge

The philosophical anxiety of losing one’s self is a misery that catches most people off guard, but this dreadful affair can be prepared for by experiencing it vicariously through such films as the 1988 masterpiece, Down and Out in Beverly Hills. The film focuses on a work-obsessed father who finds his life permanently altered after saving the life of a vagrant trying to drown himself in the family’s backyard pool. Many life-changing moments are sparked by the presence of this mangey derelict and by the end of the film, everyone is living a freer existence.

How Did We Get Here?

Life on earth has taken on many different forms but what separates human beings from the rest of this biological cacophony is how we attempt to rationalize the convoluted machinery of decision making. We see each other as self-governing individuals whose future is earned through the ultimate freedom, the freedom of choice. And it’s this ostensible claim that’s flaunted through such fictional characters as Emmett “Doc” Brown who, in the closing scenes of Back To The Future III, provides us with feel good dialogue, “Your future hasn’t been written yet. No one’s has. Your future is whatever you make it. So make it a good one!” 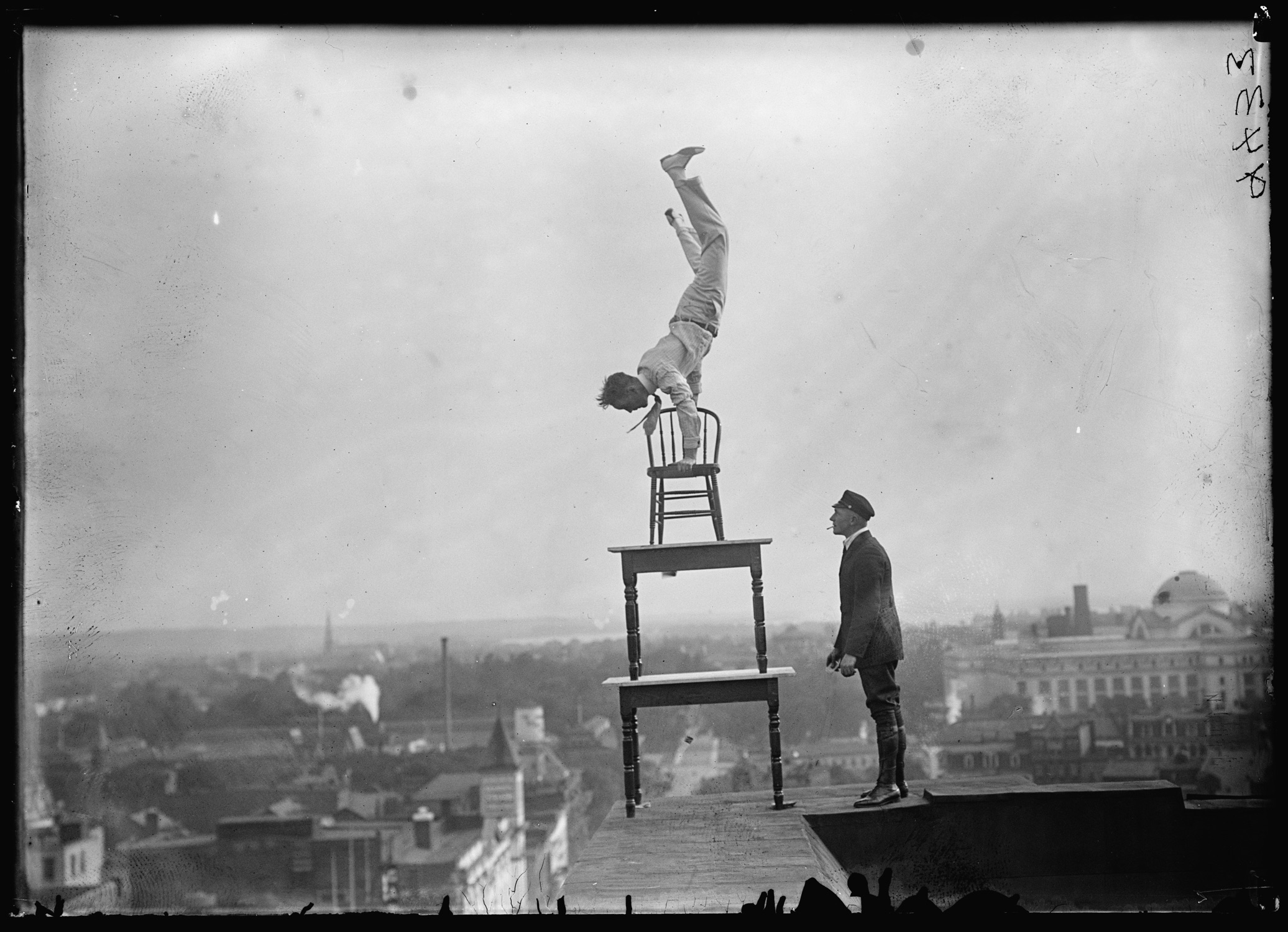 At some point in life, we may find ourselves turned upside down. Those who can will look back upon the complicated machinery of "this or that" and see exactly how we've gotten here.Daredevil Jammie Reynolds showing off his sense of equilibrium

While the freedom to choose, or “free will”, is a beautiful thing to hold as philosophical truth, it’s also complete horseshit. To believe Man’s perceptions, ego, and decisions are detached from a world of overwhelming stimuli is horribly naive. We live in a world of cause-and-effect where countless events and people fall into each other like helpless dominos. If we had the time and energy, we could each trace the root of all our choices back through the endless branches of our memoirs and see how each and every one of our decisions was, in fact, made by or under the influence of some previous causation.

From the moment we’re born we experience this lack of choice. No one chooses their parents or their names. Nobody picks the time period or society to which they are born. Not a single one of us receives a menu of life experiences to hum and haw over. These are all environmental variables of which we have no control. Yet, these volatile forces of influence pummel and shape our heading in life and form the basis for all our thoughts and actions. Where is the freedom in that?

From the moment I could talk I was ordered to listen.Cat Stevens, singer-songwriter and philanthropist

The belief in free will turns up in all aspects of life and as a result, we find countless examples of how this assumed freedom is completely incoherent. For instance, if free will were to exist at all, adults would be educating their children on all branches of mono and duotheism and letting the child pick which club to join. This would never happen, and even if it did, most children would still be subject to the influence of their small peers.

If the scientific community were ever to declare free will as an illusion, as I think we eventually must, I think it would precipitate a culture war far more acrimonious than the one that has been waged on the subject of evolution.Sam Harris, neuroscientist and philosopher

In the game of life, we are just puppets passively responding to the ancient operations of nature and all kinds of physical and social influence presiding over us. We do not control our own narratives any more than a weather vane controls its own individual motion. But what if the dominos were to fall just right and we became aware of all external influences shaping our identity and life’s eventualities? The significance of such a profound realization would present us with another either/or path.

In the game of life, keep climbing. Never look back. There was only one way for it to happen.Human fly, Jammie Reynolds, climbing a building's facade

As “either”, we accept this truth and in doing so, feel as if we were floating through life, not hardly doing anything at all. We would just be our self, responding. As simple cogs in the clockwork of time, humans are not separate from each other but form cohesive links to the past, present, and future. However good or bad things are, or were, or will be, it could have only happened one way. This could be a very pleasant feeling for some as it would finally release the burdensome weight of personal and social expectation that we would otherwise struggle with.

The “or” is that we reject cause-and-effect because we feel threatened or bamboozled by Mother Nature. The pretentious bitch has railroaded her children atop the tracks of determinism and only given us the illusion of freedom. But what if one of us were to jump from life’s trolley car and run away from predetermined circumstance? Would anyone be curious enough, daring enough to abandon the causalities that steer us so rigidly?

In the fields of mathematics and computer science, there is the notoriously difficult subject of Random Numbers, which are used in everything from gaming and simulation to encryption and secrecy. Random numbers are so prevalent in computing that any modern programming language will come with built-in functions to generate these so-called random numbers. Because of their importance and wide-spread use, you would think computers would be very good at creating random numbers. They are not.

People can be broken into two groups—those who sit back and wait, and those who lean forward and go for it.Stuntman Jammie Reynolds earning a name for himself

Any random number created by a computer will use an algorithm. This algorithm takes an input, processes it by a predetermined set of instructions then spits out, at first glance, a random number. However, given the same initial conditions, the computer’s result will always be repeatable. Thus, it’s output is deterministic. But random numbers must be unpredictable and unreproducible, even under identical conditions. All random numbers generated by the sequential commands of a computer fail the strict definition of what it means to be truly random.

Anyone who attempts to generate random numbers by deterministic means is, of course, living in sin.John von Neumann, prominent mathematician, physicist, and computer scientist

Therefore, a physical process, whose output is arbitrary and unstable, must be the source of our random numbers. One suggestion is to use the uncertainties of a photon’s random path selection upon hitting a beam splitter for randomness. Curious and interesting indeed, but we needn’t complicate the issue with quantum physics. There are simpler do-it-yourself methods that can achieve the same result. These are called mechanical random number generators, and they have the ability to liberate us from the authoritative sway of cause-and-effect and cure our impaired and otherwise predictable decision making.

A chance meeting, a false impression, or a strong gust of wind can send us all careening in some new direction.Jammie Reynolds, the man, the myth, the legend

The most captivating mechanical random number generator I can think of is Plinko. Readers may remember Plinko from the television game show, The Price Is Right. A thin disk is let loose somewhere along the top of an inclined board. Random pegs deflect the disk in odd directions to plink and plonk it down towards a bottom row of buckets, each representing dollar amounts from zero to ten-thousand.

The anticipation and riotous excitement felt in Plinko’s random chip falls made it one of the show’s most popular games, but it could be a useful tool for our decision-making just as well. We might build our own Plinko board and drop chips for everyday choices like where to eat lunch, or use it for more impactful choices like which college degree to pursue.

A statistician may call foul on the fact that Plinko produces a binomial distribution curve due to the resulting probabilities of the chip bouncing to the left or right. Given two rows of pegs and three bins, when dropping the chip from the center there’s a better chance of the chip landing in the middle bin than coming to rest in each of the outer two. But this only matters if you know which buckets are which. Just have an impartial third-party choose the order of the bins. Then, drop the disk blindfolded and Bob’s your uncle. We might call this “living dangerously” but it would liberate risk-takers and daredevils from any personal bias while rewarding them a less deterministic way to live life.