In one of the photo shoots for Oasis, Noel Gallagher had himself written on a chalkboard to summarize the evocativeness of his crew of rockstars, "The best there is, the best there was, the best there will ever be." There has never been such a bold, or true, statement made in the history of rock 'n roll.

I wish to write some marvelously fantastic blurb about Oasis that would equal the band’s own monumental achievements. I’ve spent weeks sitting like Winnie the Pooh, one arm folded, the other tapping my dense skull in a trying effort to dislodge even a wee bit crumb of Novelty, but I can only curse my feeble imagination as nothing comes to mind that would do the Gallagher brothers justice. Oh, bother.

But for anyone unfamiliar with good music, Oasis was the tour de force in the mid-nineties for a musical and cultural movement in Britain known as Britpop, whose bright, catchy pop-music songs were sustained by the tribal followings of the nation’s disenchanted youth. The brief madness of the period was, in part, a British response to the globalization of American influence marketing the dreary lyrics of US grunge onto the Queen’s people. Britpop’s existence and surging waves of popularity served to emphasize Britishness, and Oasis had led this campaign with personalities saturated with a bluster and brashness never before seen in British rock.

Rising from the depths of working-class heroes, Oasis was authentic, espoused in lad culture and their simple lyrics were, and still are, symbolic to a nation’s youth, living a carefree life, void of responsibility, whose only purpose was to drink, smoke, go out, and listen to music. And sure, this could be said of any rock band, but Oasis just seemed to carry themselves better than all of those who came before. 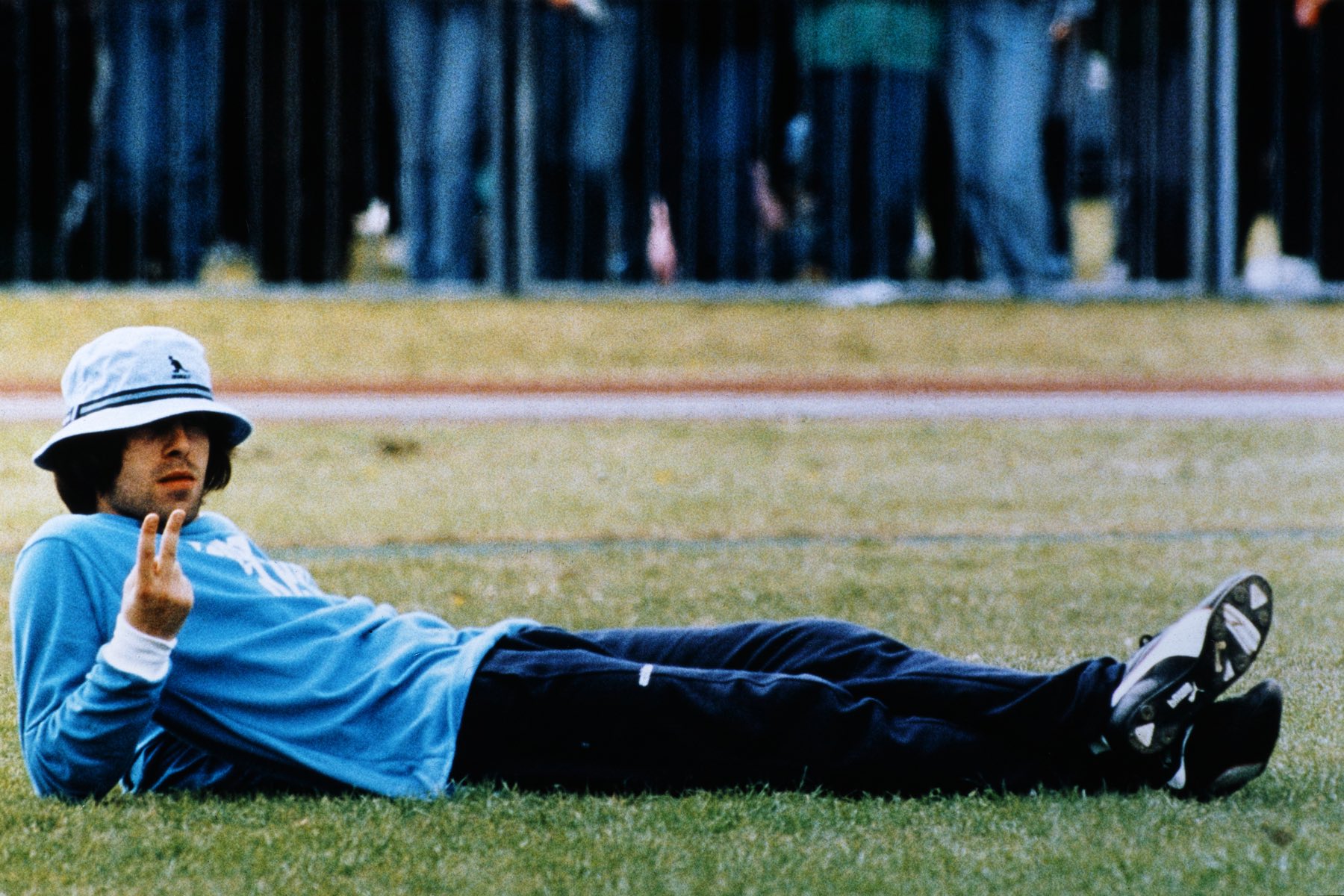 Much of the Oasis’s success, inner turmoil, and ultimate demise flowed from the brotherly love precipitating between lead singer Liam and songwriter Noel where the flux of animosity would often lead to fisticuffs and absenteeism. But apart from their drama queen tantrums, the Gallaghers were a declaration of what mammoth rockstars ought to be: brawling, charismatic, effing, hedonistic, vain and extremely talented.

Liam Gallagher was voted the greatest frontman of all time by both Q Magazine and Radio X, easily topping the likes of Freddie Mercury, Jim Morrison, Mick Jagger, John Lennon, and Kurt Cobain. It was the loutish behavior, arrogant cockiness, arms aloft in triumph and gorgeous Mancunian vocals that earned Liam the celebrated title, and rightly so.

And then there was the way Liam delivered the songs. The rest of us almost seemed to fade into the background; all our audiences seemed to be transfixed by our lead singer.Tony McCarroll, Oasis: The Truth.

Liam’s brimming ego and arrogant snarl created an overwhelming stage presence, and his off-stage antics wrote the narrative of a proper rock star. Plus, no one can forget his iconic stance behind the microphone, which only fortified Liam’s intimidating persona, this shining beacon of lightning in front of the thunderstorm of sex, drugs and rock ’n roll. You would never meet anyone with more attitude or swagger. But without the musical brilliance of his brother,Noel, Oasis would never have achieved its godlike distinction with just a bravado of intoxicating vocals.

From the aggressive growl of Cigarettes and Alcohol to the delicate purr of Idler’s Dream, Noel Gallagher’s compositional ability during the height of Oasis has never been surpassed. I would imagine selecting set lists was exceedingly difficult when there were so many great songs to choose from. Even the B-sides during Noel’s prime were of such high quality that many found their way into live performances, up there with the chart-topping singles. Noel could write songs about nothing in particular, and yet because of the way they were executed, went on to become smash hits.

I was writing about things that were true to me—about shagging, drinking, and taking drugs.Noel Gallagher

Calling attention to but three examples of his limitless flair, Noel was voted Best Songwriter of the Last 25 Years by College Times, bestowed the Godlike Genius Award by NME and presented the Outstanding Song Collection award by the British Academy of Songwriters, Composers and Authors. There’s an honesty heard in the strumming of Noel’s guitar, a reverence for and deference to the tradition of songwriting, and a captivating talent wrought from the subtle perfectionism of his craft. Record collections would swell with Oasis if people were more attentive to the fervor of this Britpop sound that had defined a moment in time. 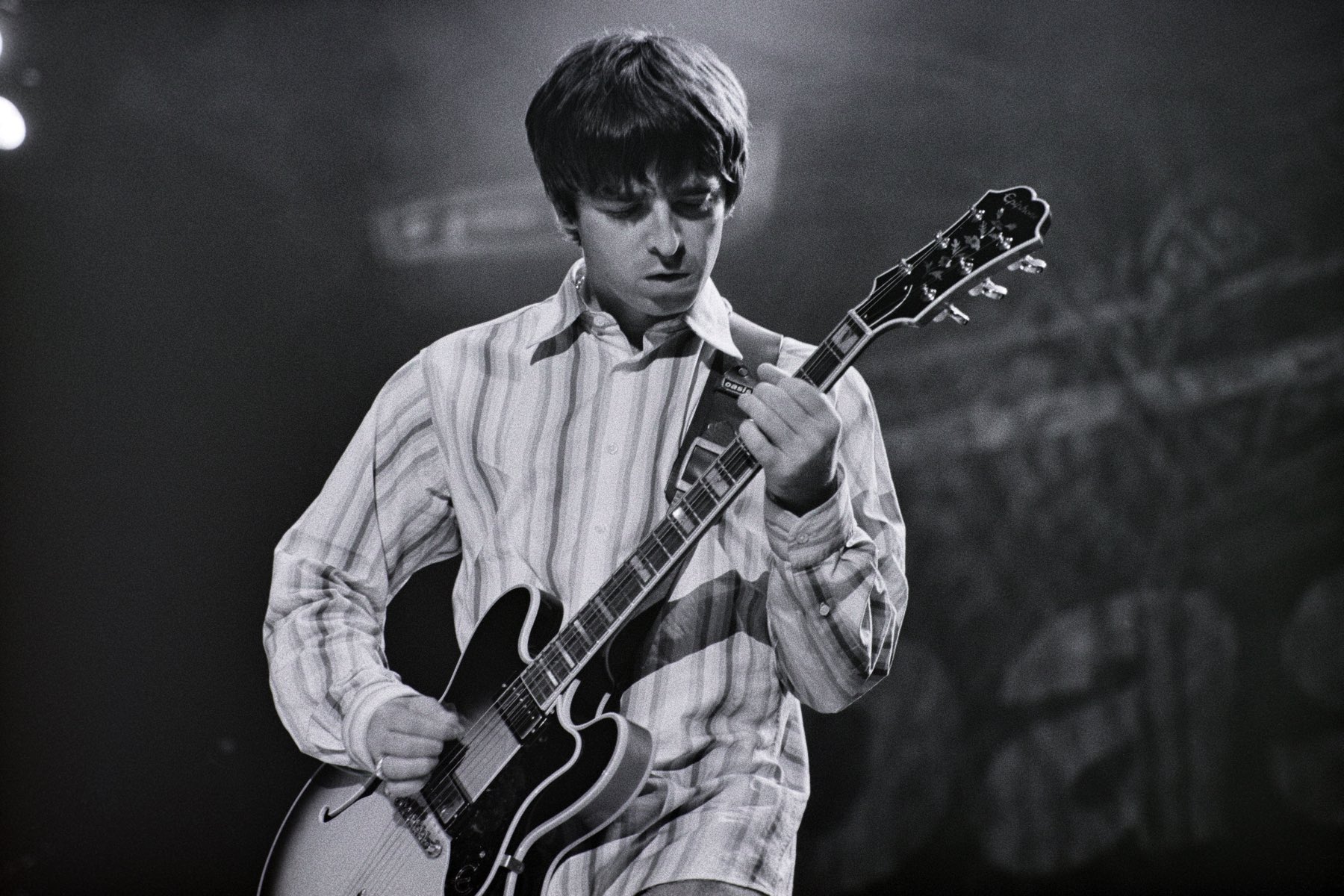 Noel Gallagher strumming Roll With It with one of his early Epiphone Sheraton II guitars.Worcester, MA 1996

One comical point of interest is how the genius of Noel Gallagher has been sued on several occasions for the purported musical theft from other musician’s work. Guitar riffs and melodies from the likes of T-Rex, Coca-Cola, Burt Bacharach, John Lennon, REM, The Velvet Underground, and Stevie Wonder have all found their way into Oasis tracks. And my educated response is, “So what?”

Every artist in the history of art has taken from others to rework as their own. The whole concept of creativity can be broken down into the simple proficiencies of knowing how to hide your sources. The most important point of the alleged plagiarism is that Noel made the harmonies sound good, reshaping the true spirit of the sound and making it his own. The fact that Noel pinched from others, and did it successfully, only goes to show that every song out there would be better if it were rewritten and performed by Oasis.

Our music will stand the test of time. That is a fact.Noel Gallagher

Statues should be erected in their honor. Everything Oasis accomplished is what every aspiring musician dreams of, that pedestal of fame, the affirmation of triumph spawned from boundless musical talent, tabloid coverage, fisticuffs, saucy interviews and colossal live performances. Oasis, the champion of Britpop, deserves a presumptuous title to parade brightly across their mighty musical achievements.

The Best Band In The World

At some point in every artist’s career, a realization occurs where the aptitude for the creation and the kinetic potential for greatness is acknowledged. Be it frivolous hacking or Da Vinci prowess, the artisan must come to terms with these reflections of self-identity.

And so after their first album, Definitely Maybe, became the fastest selling debut album of all time, Liam and Noel began describing themselves as the “Best Band in the World” to radio DJs and journalists worldwide, partly for the publicity and partly because it was their honest self-reflection. Certainly many would scoff at such boastful statements, but my dear Watson, we only need to follow elementary logic to see this narcissism was entirely appropriate.

First, imagine an American football player punting the ball five yards down the field using a blundering technique of hurling the ball at his extended shin and bouncing the ball across a field line. This trivial feat would only be impressive to an Oompa Loompa or a Wizard of Oz munchkin—a miserable attempt at best.

Next, think of an experienced kicker punting the pigskin majestically into the air, landing the ball in the opposing end zone, some ninety yards in distance. The talent and skill needed to produce this hang time would come only from a professional NFL punter with years of practice and a perfected form.

Finally, let’s picture a punter kicking that same prolate spheroid a gargantuan 240 yards clear out of the stadium and into the parking lot in a dazzling display of superiority. This is how one easily deduces Oasis as the Best Band in the World. On the mathematical scale of relativity, Oasis was that much better than the next best thing (and still is).

We’re not arrogant, we just believe we’re the best band in the world.Liam Gallagher

It’s difficult to comprehend the band’s far-reaching success. At the height of Oasis, they were the biggest thing in music since Beatlemania.

Nowadays, many like to believe Johnny Depp’s performance as Captain Jack Sparrow was the zenith of the celebrity’s career, but that’s just a common misconception. The true highlight of Mr. Depp’s career came when he played slide guitar for the Oasis track Fade In-Out on the album Be Here Now. We can only imagine the deep sense of pride Johnny Depp must feel with this accomplishment. How many people can honestly say they played guitar for the Best Band in the World?

No other musical group can compare. Oasis is, was, and forever will be, the Best Band In The World. And while many recognize Definitely Maybe or What’s the Story (Morning Glory) as their finest work, my mind’s eye sees things from a different perspective.

I once traveled 1,300 miles by motor car from Arizona to Nebraska while listening to The Best Band in the World’s third album, Be Here Now, on repeat for the entire twenty-hour jaunt. At over 71 minutes in length, it’s a mammoth of a rock album. Yet, there’s a contagious energy found within the music, transmitted by the poetic confidence of the performers and the sound waves conjuring visions of Liam Gallagher’s spirited swagger. Even now, a decade later, I will let the disc spin in my car for weeks on end because the songs just never get old.

In no way am I dismissing the first two Oasis albums. They each contained loads of chart topping singles - Live Forever, Supersonic, Cigarettes and Alcohol, Rock ’n Roll Star, Roll With It, Wonderwall, Don’t Look Back In Anger and Champagne Supernova - all being the heart and soul of Oasis. But Be Here Now has always received more play time in my audio players than every other Oasis record combined, and the margin is probably 5:1.

My enduring disposition for Be Here Now is somewhat baffling. Nowadays, the album’s release is recognized as the official end to Britpop due to its uniquely bloated, power-mad sounds. Fans were expecting another collection of catchy pop tunes that embodied the enthusiasm of being young, unchained to worry and naively believing they would live forever. But Oasis had grown up, leaving their post-pubescent innocence for drugs and… well, more drugs.

I am thoroughly smitten with the brickwalled mess that is Be Here Now. The album came at the zenith of Oasis, asserting its own self-importance with a massive aura of confidence, the guitars cranked and strummed with a justified sense of arrogant accomplishment. Uninhibited by self-doubt, the musical pieces of Be Here Now reflect on being alive in the moment and not giving a damn.

It’s the sound of five guys on coke, in the studio, not giving a fuck. There’s no bass to it at all… …and for every millisecond Liam is not singing a word, there’s a fucking guitar riff in there, in a Wayne’s World style.Noel Gallagher

To listen to the album as a whole requires an intellectual musical endurance as the lengthy songs seem to just go on and on. The average track length clocks in at six minutes while the UK Single version of All Around The World completes itself runs 9 minutes and 38 seconds. Crazy. But the listening experience is like that of any epic symphony where sifting through countless layers of instruments leads to a deeper appreciation for the songwriter’s subtle perfectionism. This album may be an acquired taste that music connoisseurs drink up heartily. No doubt a flawed work in some respects, but once you get past its minor imperfections, good God is it delicious.

There will never be another band like Oasis again, and that saddens me. The digital age has brought forth relentless distractions and watered down flavor-of-the-week musicians. Oasis was the last great musical phenomenon. Unibrows. Wonderwall. Our kid. Swagger. Live Forever. Vespas. V-signs. Champagne Supernova. More swagger. Knebworth. Cocky award speeches. Fearless interviews. Godlike. Mad fer it!