Stardust In The Galactic Wind

We are made of star stuff, every atom in our body, synthesized in the burning death of a star, and carried out in the wind of nuclear explosions. How can our piddly little minds even begin to understand the meaning of it all? Maybe we can just pretend, and then affix the meaning ourselves...

Without doubt, the most attractive period in human history is that radical decade we fondly remember as the nineteen-eighties. Our senses are aroused by the unabashed frosty-eyed exuberance that erupted into a melange of neon color, synth pop, joysticks, lasers, guitar solos, and hairspray excess. No other crosshatching of culture, cinema, music, and technology resonate into today with such bitchin’ nostalgia. Bodacious is the only word to describe these years of living that peaked in 1989 with the theatrical release of Bill & Ted’s Excellent Adventure, a compelling film that traced the teenage adversities of two highly spirited doofuses wrestling with the habitual tyranny of institutional authority.

In the film, Bill S. Preston and Ted Theodore Logan are struggling valley students in danger of flunking out of high school most heinously. The consequences of such a bogus outcome would send Ted to an Alaskan military school and obliterate the makings of Wyld Stallyans, the duo’s transcendental rock group. For without the philosophical rhapsodies found in the lyrical prose of their momentous anthems there will never be the seed of sanguine conviction to flower into a utopian society of peace and prosperity for all mankind.

It’s only with the help of a cool dude named Rufus sent back from the year 2688 and a telephone booth capable of traversing the circuits of time can the two Great Ones succeed in completing their oral History report.

With zest to the max, these dimwitted students pull an all-nighter traveling back in time to kidnap history’s most influential figures for their show-and-tell extravaganza. Apprehended figures would include the likes of Abraham Lincoln, Ludwig Van Beethoven, Billy The Kid, Joan of Arc, and others.

But it was the toga-wrapped luminary abducted in the year 410 BCE that should pique the interest of anybody with a curiosity for big questions. The Greek philosopher, Socrates, gave humanity new perspective with his philosophical pedagogy that stated, “Our lives are but specks of dust falling through the fingers of Time. Like sands of the hourglass, so are the days of our lives.” 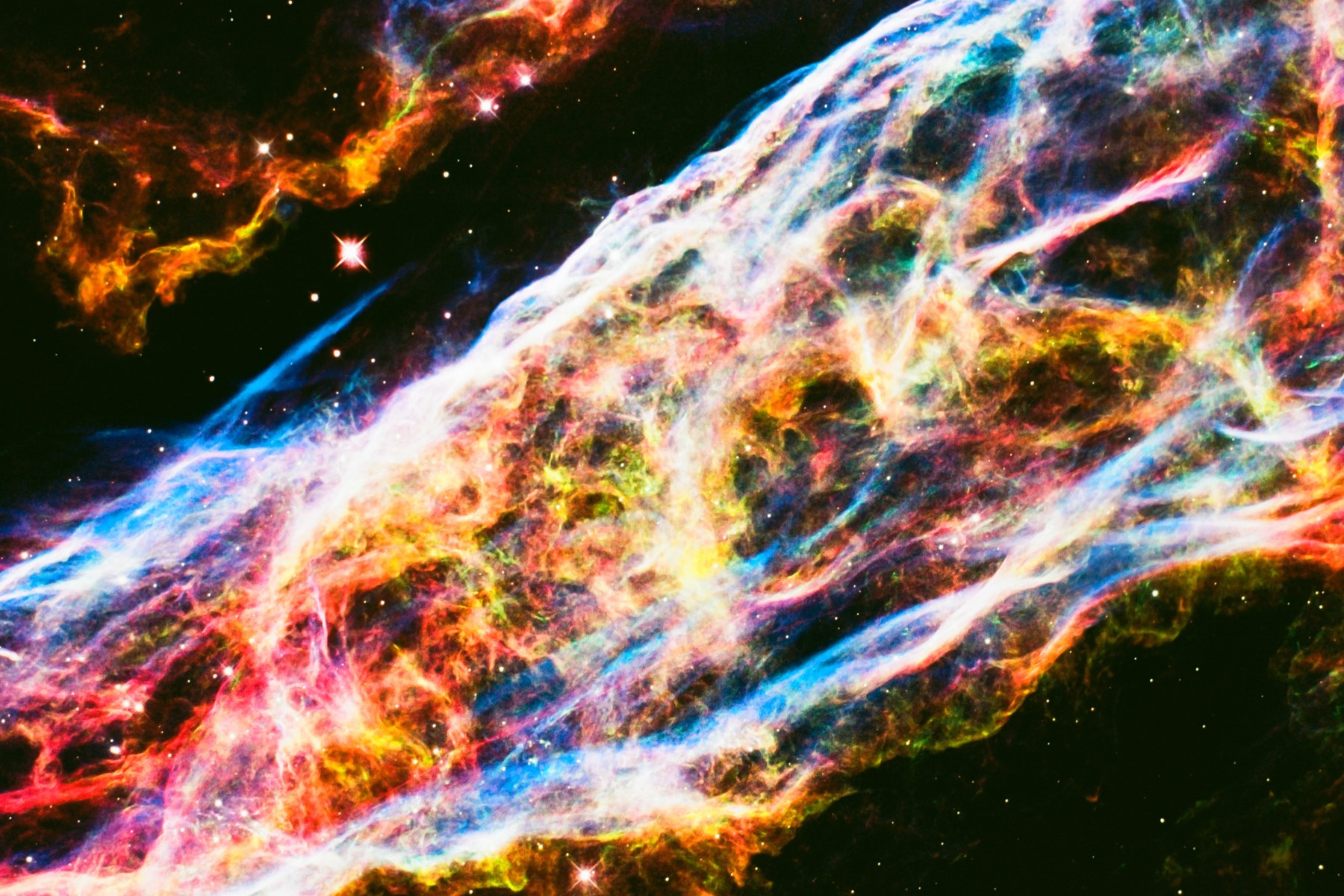 Humans cannot comprehend the immensity of space or time that encompasses the known Universe. Distances from here to there are are far beyond our imagination.Veil Nebula - 2,100 Light years from Earth

In the film, Ted actually says it better when he introduces himself to this illustrious thinker of life by declaring, “All we are is dust in the wind, dude.” And although Ted’s idyllic phrasing may, and probably was, derived from the lyrical influences of the band Kansas, his words still shine brightly in the constellation of great wisdom.

All we are is dust in the wind, dude.Ted Theodore Logan, musician and philosopher

Of course, we should duly note how this humbling phrase was pronounced by someone who had a limited understanding of our place in the Universe. With our now accumulated knowledge now, we can broaden Ted’s field of view and redefine his sensible statement into a more correct idiom. In doing so, we realize that all we are is stardust in the galactic wind, dude.

Anatomy Of A Star Child

Casual observations of interstellar space map human existence onto a crumb of dirt, circling an ordinary star, in the quiet suburbs of an everyday galaxy. It’s quite remarkable how inconsequential we appear when we compare the totality of living matter found on Earth to the collective mass of the visible Universe.

Life on our pale blue dot accounts for just a millionth of a billionth of 1 percent, or 0.000000000000001%, of the Universe. This sum is substantially less if we include the stuff we can’t see, dark energy and dark matter. If some cosmic intelligence created the Universe, life must have been an afterthought, or an oopsy daisy.

What’s more, everything in our world is made from teeny-weeny objects called atoms. These atoms can be sorted into various types, called elements. The human body is composed of many such elements like oxygen, carbon, hydrogen, and nitrogen for example. And where did these elements come from? Why, stellar nucleosynthesis, of course.

Stellar nucleosynthesis is the process in which the extremely high temperatures in stars cause lighter nuclei to fuse together into heavier nuclei. During most of a star’s lifespan, hydrogen burns into helium. Then, helium burns into carbon, carbon and helium burn into oxygen and so on to progressively form heavier and heavier elements all the way up to chromium and iron. 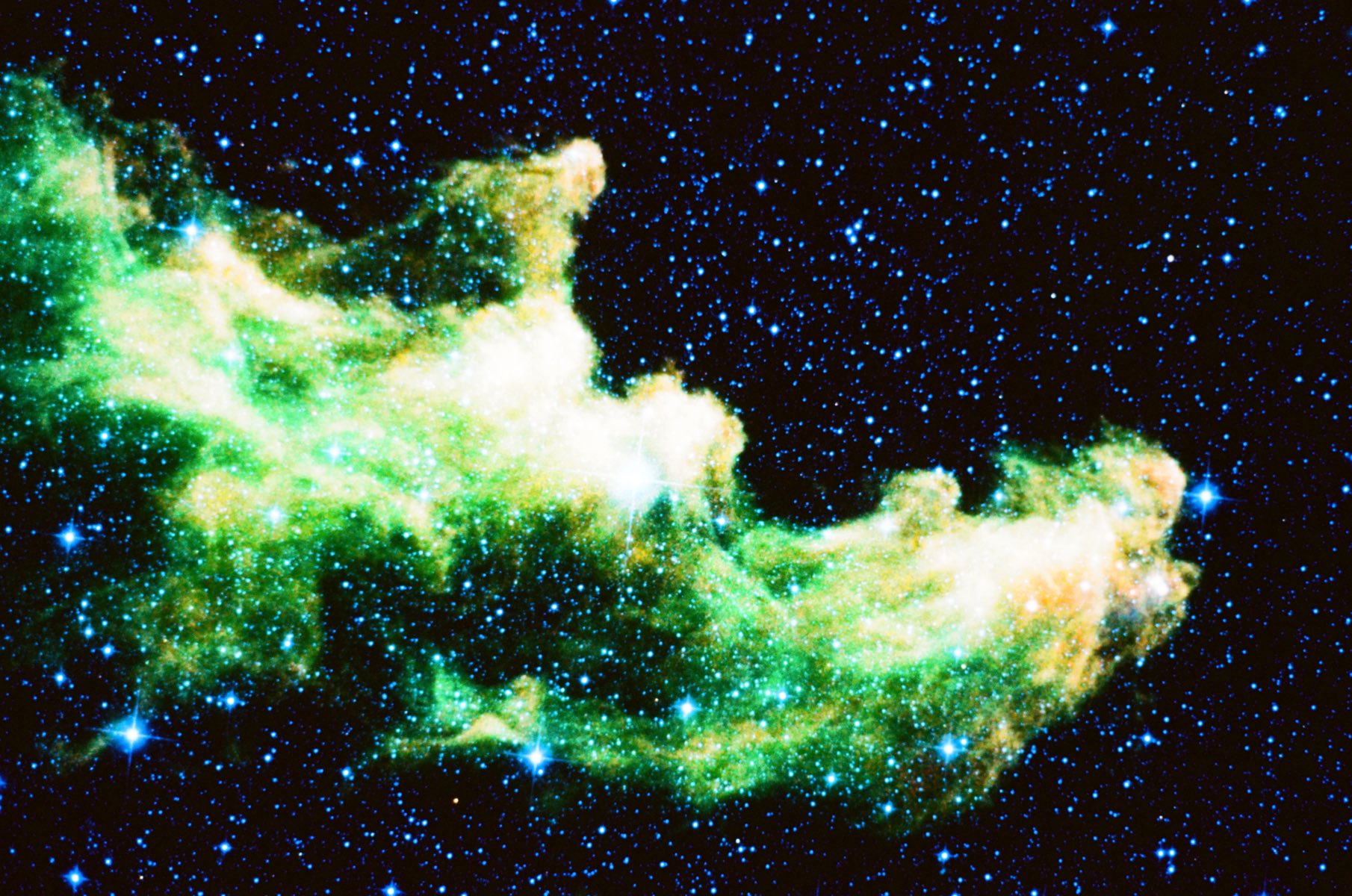 Giant clouds of gas and dust are pushed outward from exploding stars, only to condense into new stars and worlds.Witch Head Nebula

Normally, a star is kept from collapsing from the heat generated through this nuclear fusion. A state of hydrostatic equilibrium is reached between the hot burning gas trying to escape and the star’s immense gravity pulling it back in.

Eventually, the star begins running out of fuel to burn and if the star’s mass exceeds the Chandrasekhar Limit, about 1.4 times the mass of the Sun, gravity will pull some of the mass back into its core. Unable to support its own weight, the star collapses into itself. Immense pressure and temperature build instantly, resulting in a violent explosion called a supernova. The runaway fusion ejects most, if not all, of the star’s material outward in a majestic cloud of element-rich cargo.

Supernovae have played an important role in the galactic evolution of the entire Universe. The gas and dust spewed forth from exploding stars collide with other element-rich clouds of gas to accrete into more stars and worlds. The atoms found in your left butt cheek may have come from an altogether different star than those in your right butt cheek. Astonishing, but true!

The nitrogen in our DNA, the calcium in our teeth, the iron in our blood, the carbon in our apple pies were made in the interiors of collapsing stars. We are made of star stuff.Carl Sagan, astronomer, scientist, and science communicator

We can feel a profound sense of connection with the natural world by understanding how each and every atom in our body was created in the nuclear furnace of a star exploding long before we were even born. 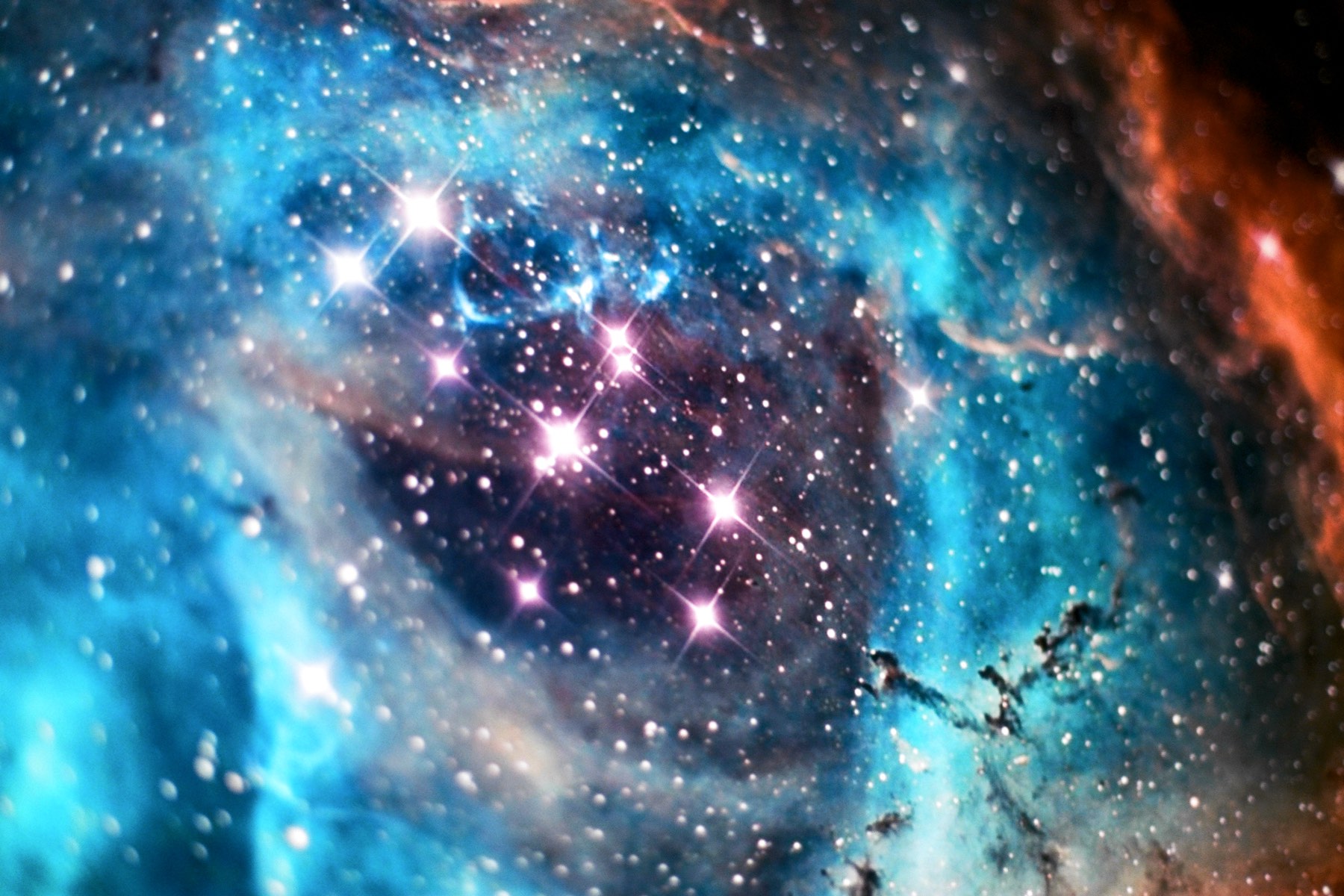 One giant star's death is often the event that triggers the formation of many more stars, planets, and in all likelihood, life.The Rosette star formation region

Now, if all the types of elements found in our bodies can also be found in space, wouldn’t there also be life on some distant planet circling another star?

The thought of other planets containing life has been around for a long time. Giordano Bruno was suggesting the idea as early as 1600. The Church burned him at the stake for his eccentric rationality. But it wasn’t until 2009 that NASA scientists launched the Kepler spacecraft and a primary science mission to search for exoplanets beyond our own Solar System. Based on space mission data, Caltech astronomers concluded there were at least as many exoplanets as stars in the Milky Way. So, between 100-400 billion planets just in our galaxy alone.

For living matter though, it’s often believed that water in liquid form is needed to create and sustain life. Each twinkling star in the night sky contains a “habitable zone”, a safe region where the planets’ temperature is not so cold it solidifies water into ice and not so hot it vaporizes water off the surface.

If we question how many Earth-like planets might contain liquid water in our humdrum galaxy, the answer is still in the tens of billions. And there may be upwards of 2 trillion galaxies in the Universe.

We are now confronted with two staggering facts. First, everything needed to sustain life on Earth is sowed throughout the cosmos. Second, there are virtually an unlimited number of planets in the Universe capable of supporting life as we know it. Because of these truths, life is probably, if not presumably, spread throughout the Universe.

But if the sum of all the life on Earth is reduced to just another dot on a chart stretching a billion points in either direction, would there be any meaning to our ego-driven lives? Would we still be significant, goddammit?

The clergyman would, of course, welcome this conceited question with his programmed response, “God loves all his children. Hallelujah!” The scientist would glance at the chart and say, “No, not significant.” And then there’s the lampooning maverick who would exclaim, “Fucking idiot. You’re asking the wrong question!”

In his poignant novel, The Hitchhikers Guide to the Galaxy, Douglas Adams surveyed the answer to the ultimate Question of Life, the Universe, and Everything. He wrote of a group of hyperintelligent pan-dimensional beings who built a stupendous supercomputer called Deep Thought to decipher the answer to life’s ultimate Question. The computer took 7 ½ million years to “think about it” before reaching its conclusion, which was a rather small number. 42.

The philosophical arithmetic used to arrive at 42 appeared as mathematical gibberish to the beings who constructed the computer because they never actually knew what the ultimate Question was to begin with. Regardless of the droll oversight, what this arbitrary number symbolizes is how we can find true enlightenment.

In interviews since the book’s publication, Adams has stated his double-digit figure was just a made up thing to move the story, yet countless heathens have put forth theories in attempts to decode the empty numerical, repeatedly assigning their own meaning to fit within the numerical constraint.

Likewise, many philosophers have the notion that life is only worth the meaning we affix to it. Ask not what is the meaning of life but instead how can we add meaning to it. However, to do this we must first recognize that from its very onset, life has no meaning.

To believe there must be meaning to life and it’s our task to figure it out is all very foolish. Simple people believe everything must have a meaning. Human life must have a why because if it doesn’t, our existence is dumbed down to just a mere happenstance, the unplanned child of Mother Nature and Father Time.

The only reason for life is life. There is no why. We are. Life is beyond reason.George Lucas, filmmaker and entrepreneur

Many will snort at this affirmation and in their deluded search for meaning will invent what they cannot find in order to bring structure to their conception of reality. For others, the question of why has a paralyzing effect in its all-consuming inquiry into the unknowable. To demand What is the meaning of life? is no different than forcing the question, What is the meaning of a cheese sandwich? 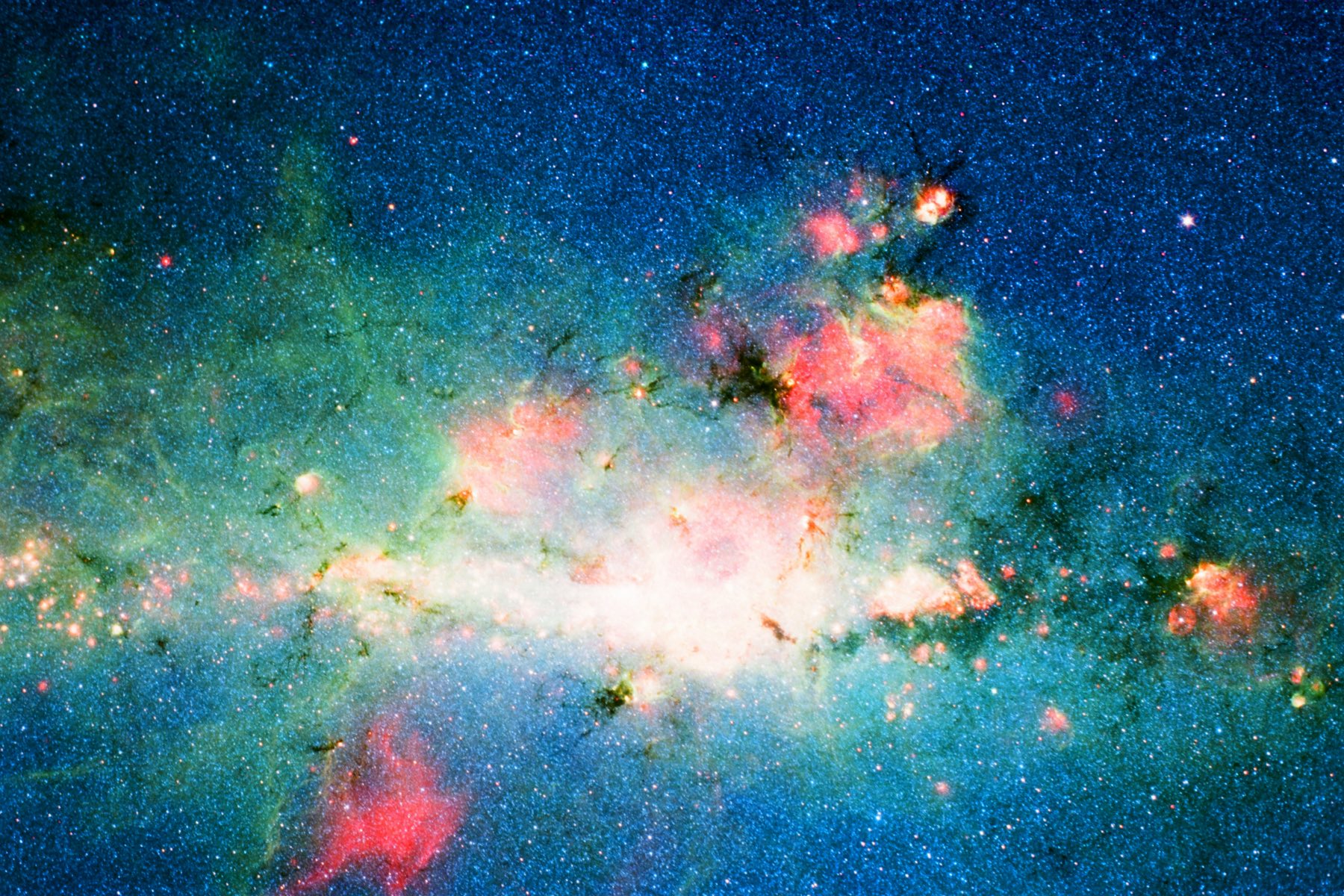 Perhaps the meaning in our meaningless life is to find a purpose that which allows us to shine brightly, like a blazing ball of hot gas.Peony Nebula, home to a star 3.2 million times brighter than our Sun

Just sit back and enjoy it. Ride the rollercoaster to its very end, and take pleasure in all the ups and downs, loop-de-loops, heart thumping speed and sharp angled turns. And hurl into a paper bag when you need to.