Thank You Sir, May I Have Another?

How are we supposed to be happy with one sugar glazed pastry when our friend has two? We feel an intense burning sensation in our soul that radiates down our arms into clenched fists when the realization strikes that we could have asked for more.

Food historians no doubt recognize a vast and tasty doughnut epic spanning generations of fried food and culinary experimentation from cultures all over the world before the appearance of the mass-marketed, Instagram-worthy, sugar-jacked pastries that we gobble down today. Americans now eat more than 10 billion doughnuts a year and have even given the gut bursting confections a standing ovation with National Doughnut Day. Of course, the stomachs of every admissible expert on human health and well-being will churn in disgust at the calorie-dense, nutrient-deficient lunacy that is the doughnut, but those dietetic authorities can all, pardon my French, Va te faire mettre! because some things in life just aren’t worth missing out on.

In years past, the doughnut was a simple thing that any kitchen apron could have thrown together, and that the only excitement wrought in eating the Plain Jane cake tires came from dipping them in a dark, caffeinated beverage. But then one day somebody asked for more, and we’re better off for it, because walk into any posh doughnut shop and behold how these once bald tubes of dry yeast have been reengineered into scrum-diddly-umptious perfection.

Our eyes are seized by the bright enamel, our hands shake in anticipation, and our teeth feel like rotting from just the momentary glance at the liquid sugar oozing out from these tasty morsels. The dazzling hues and confectionary sprinkles are so visually arresting that it looks as if someone had taken shotgun to a unicorn’s head and blasted the entrails all over the baked goods. It’s enough to make us swoon over, but we hold ourselves together and let a prim, Ooh là là slide effortlessly off our salivating taste buds. 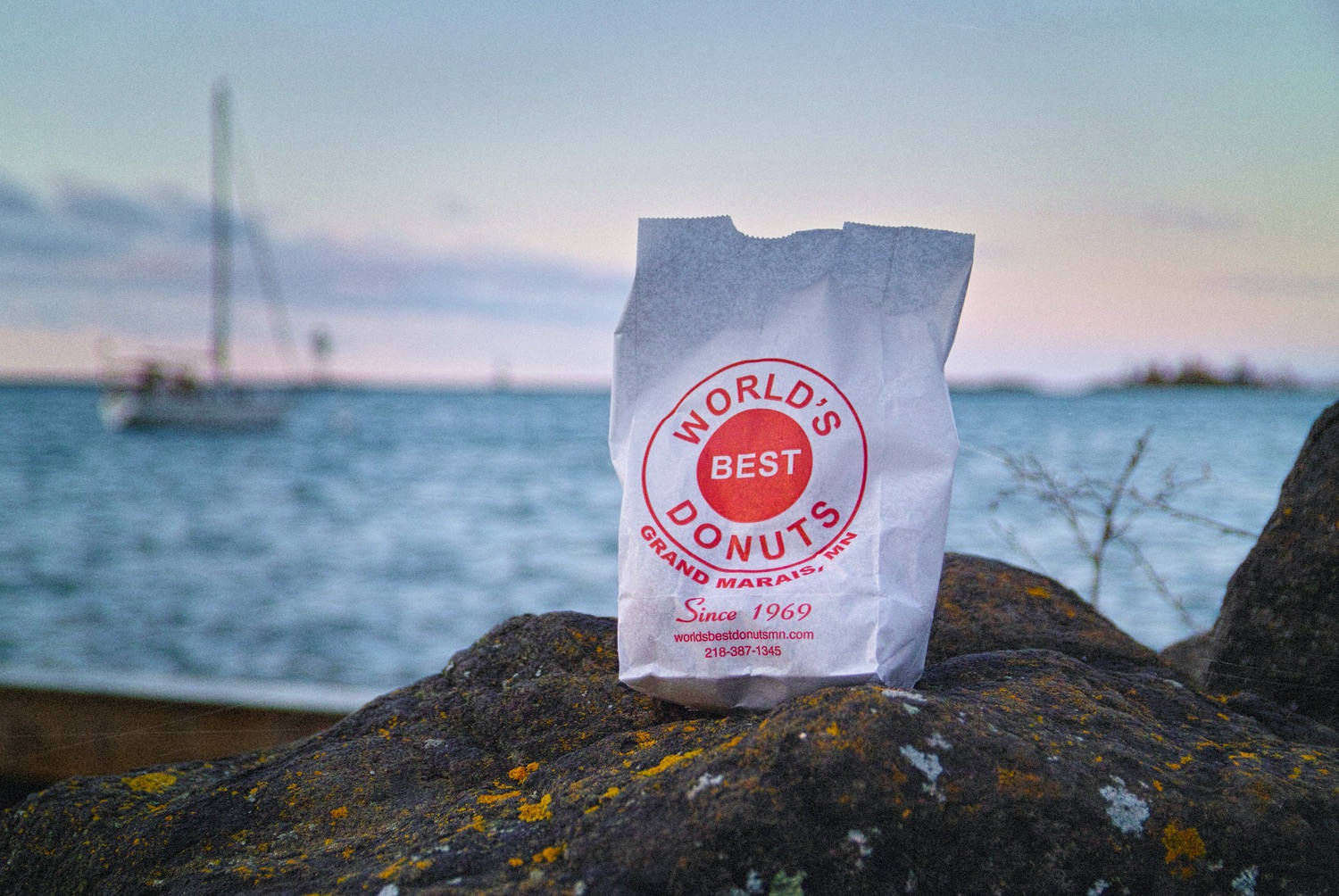 There is a small, frivolous debate in the pastry world over which is better, cake or yeast donuts. A family-owned bakery in Grand Marais, Minnesota has the answer for you.Grand Marais, MN

Remember the potato chip catchphrase, Betcha can’t eat just one? The slogan is just as appropriate, or perhaps more so, for a box full of glistening doughnuts. Try to eat just one and you’ll soon find yourself eating the rest when nobody else is looking. The half kilo of sugar, or whatever it amounts to, hits us like a freight train and knocks us down like a rag doll. But isn’t that what we live for? We live for that heart-pumping moment right after the hit and right before the crash. The euphoric sensation puts us into a stratospheric limbo where all the world is in focus like it’s never been before. Our senses are awakened by the melange of sweetness pumping through our veins, dilating our pupils, and revving our heart like a Formula 1 driver punching the gas of a 52-HP Volkswagen Rabbit. We know it’s going to hurt afterwards, but it’s that short-lived rush of pure, unadulterated joy that keeps us coming back for more.

Every doughnut connoisseur knows the best doughnuts in the world are those that contain multitudes within multitudes within multitudes of flavor and texture to tickle every palate from here to Timbuktu. Trying to single out any one aspect of the magnificent doughnut would be to deny the baker’s genius, because no boundaries shall ever be conceded in the act of creation: poi, blue Sky, Red Bull jelly, jalapeño chocolate, dried pork and seaweed, caviar, apple cider, matcha crème brûlée, cannabis, cinnamon star anise, smoked s’more, bubble gum, watermelon, Captain Crunch, and all kinds of other wild ass flavors you can’t even begin to imagine. Oh, how we become a nervous wreck in our zest to savor each and every damn one.

But wait now! We need to pull back the reigns on our doughnut fantasies and not get too carried away. We cannot savor the delights of every lip-smacking flavor we see in the store or online. Perhaps this is one of life’s greatest disappointments—that we’ll never have the means to travel the world in search of its wildest creations. And so, we have to learn to be happy with less.

How To Be Happy With Less

Take a minute to consider those of great wealth, like Mr. Toad of Toad Hall. In the classic children’s book, The Wind In The Willows, Kenneth Grahame immortalized pompous wealth, and the shameful desire for more, as a boastful little toad who was stricken with the hell-bent quest for more, more, more! Always on the lookout for the next best thing, Toad was never satisfied in any one activity, and whenever a new occupation presented itself, he threw down his old amusements, declared them frivolous, and jumped head first into the new flavor-of-the-week adventure with a blind frenzy.

Animals and humans alike have adapted to the struggles for life. When one can gratify all his whims without a penchant of effort, a pervasive phenomenon begins to occur and hooks itself like a tractor plow to our subjective quest for happiness, hedonic adaptation. And it doesn’t matter whether we’re buying crap online or jet-setting around the world, we get used to things, and after the short-lived novelty wears off, we ask the world for more.

By the very scaffolding of life, many of our wants and desires are unattainable, completely out of reach, and it’s only when after we cleave off such unreachable cravings that the problem of happiness can finally be solved. When we recall our youth, it’s easy to remember how easy it was to be happy. Simpler times meant fewer things to assault our complacency. It was less of a struggle to find satisfaction in less stuff and fewer experiences. Happiness must be then, to a great extent, a balance between what we want and what we have, for only in our quiet yearnings for more and the stream of life that the greatest joys can be found.

When there is a want stuck in our heads and we don’t ever attain it, the feeling is sustained. It keeps us working, expecting that we can achieve it and, by such great expectations, keeps the heart pounding with enthusiasm. The chase for the inaccessible becomes an adventure. After days, weeks, or years of futile attempts to achieve the impossible, we might look back upon our efforts and discover we accomplished a great number of good things along the way.

There is a human dignity in not getting all that we want. Just look at man’s best friend. If we gave a dog all the treats it wanted the dog would swell like an over filled water balloon. That would not be a good thing. There has to be limits. There has to be a humble respect for life’s limited possibilities.

We should applaud those persons out there who have acquiesced to the nature of the universe. They have seen through their enthusiasm for more and have become happy with what they have. After all, this is the only rationale attitude of a truly enlightened person. But this blissful state of being is a rather gloomy conclusion for the rest of us. How are we supposed to be happy with one sugar glazed pastry when our friend has two? We feel an intense burning sensation in our soul that radiates down our arms into clenched fists when the realization strikes that we could have asked for more.

Be Satisfied, But Always Ask For More

Some people believe the desire for more is a disease that needs to be cured by understanding life is not a game of improvement but one of constant tradeoff. It’s easy to draw this conclusion if the only investigation one did was watch small children crying at their parents for more toys, more sweets, and more time before bed. But the “Disease of More” concept is a complete misinterpretation of reality, or total bullshit if you prefer, as these self-help experts remain ignorant to the fact that our pursuit for more is the single greatest biological trait that has pulled life from the primordial oceans of its infancy and up onto the terrestrial landscape of endless opportunity.

There is a behavioral circuit in our brain known as the mesolimbic pathway, also referred to as the dopamine desire circuit. This pathway is found deep inside the skull, near the brain stem, in the ventral tegmental area—meaning, it was there long before we were even human. Intense feelings of want, desire, and excitement can be felt when the brain’s favorite chemical, dopamine, flows along this avenue and up into the higher regions of the forebrain.

After millions of years of evolution, the dopaminergic process evolved to maximize future resources by promoting behavior that boosted the animal’s chance for survival, reproducing, and winning competitions. When we see a plate of doughnuts on the table, dopamine is activated, not by an immediate hunger, or need, but by the presence of something attractive, from a life-sustaining viewpoint.

In his book, The Molecule of More, psychiatrist Daniel Z. Lieberman analyzes dopamine’s role in the brain and how it shapes our drive for love, sex, and creativity, and how it, ultimately, affects the fate of the entire human race. Dopamine is there to urge us, to narrate our behavior, and to motivate humanity to explore its wildest imaginations. The more dopamine in our brain, the more restless we become. Dopamine feels great too, and it’s a feeling many spend their lives chasing.

Back in 1996, at the BRIT Awards, a tabloid journalist had asked the undisputed king of Britpop, Noel Gallagher, if he was happy or not, to which Noel replied, “Listen, I’ve got 87 million pounds in the bank. I’ve got a Rolls Royce. I’ve got 3 stalkers. I’m about to go on the Board at Manchester City. I’m part of the greatest band in the world. Am I happy with that? No I’m not! I want more!!”

Wanting more is the drive that pushes us onward. It allows us to achieve more happiness, more well-being, more fulfillment, and more self-actualization. Our unending wants give rise to the phrase, “Shoot for the Moon”, and while most citizens of the world will never reach such dazzling heights, some of us actually do.

Don’t belittle yourself into thinking you don’t deserve more. Each and every one of us deserves the very best. Don’t doubt your dreams. Follow them. It’s through this intense human feeling of want that has fueled the permutations of human society ever since our humble beginnings of grunting and throwing poop at each other, and it will continue to be the impetus for advancing human society for generations to come. There’s nothing wrong with a little heartache for more. If we didn’t allow ourselves to ask for more we’d still all be pitching hay and eating gruel. Be satisfied with your life, but always ask for more.