The Ryder Cup is the most intense event in the golfing world. It's a unique, team-style tournament that turns the cordial golf clap into a crowd-sourced, drunken shout. New Yorker writer, John Cassidy, described the tournament as "made-for-television entertainment." And so it is. But the biannual event offers us other ideas as well.

The Ryder Cup is recognized as the world’s greatest golf event. It’s the crème de la crème of tournament play and only comes but once every two years. Two teams, one from the U.S., the other from Europe, assemble the best golfers to battle it out in a 3-day multi-format rivalry where second place is the same as last. The winning team retains the trophy title and bragging rights until the next biennial cycle.

It’s quite a remarkable festival of slacks, polo shirts, and titillating excitement. Every Ryder Cup is marketed as more epic, more exciting, more dramatic, and more legendary than the one before. This operating procedure seems to be consistent with any major sporting event nowadays, but how does an ancient sport steeped in a hot cup of self-control, etiquette and integrity become this larger-than-life happening that draws nearly half a billion TV viewers worldwide? 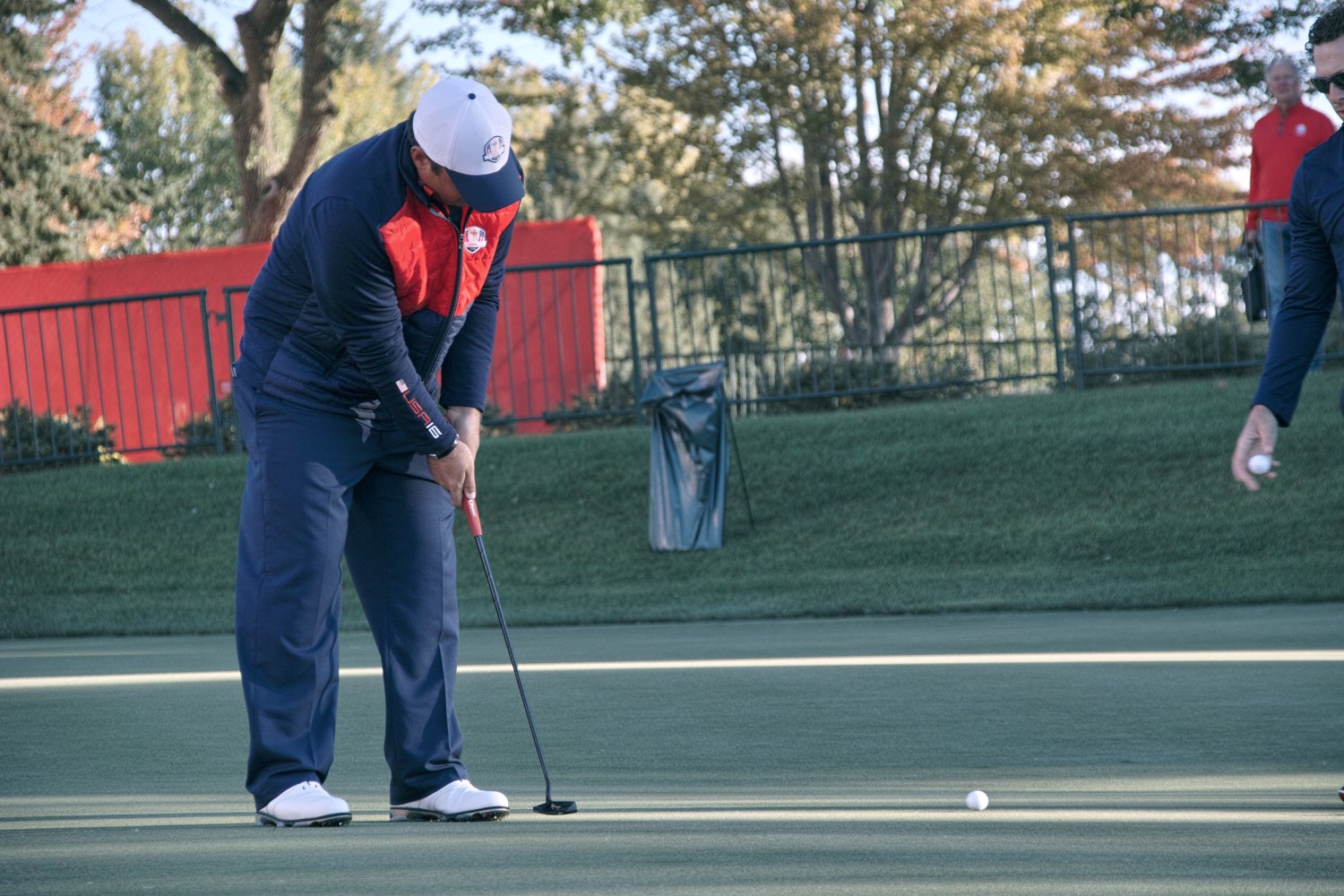 Originally, the Ryder Cup was created to promote camaraderie and good spirits between England and the U.S. in a gentleman’s game of ball striking.

I trust that the effect of this match will be to influence a cordial, friendly and peaceful feeling throughout the whole civilized world… I look upon the Royal and Ancient game as being a powerful force that influences the best things in humanity. Samuel Ryder, creator of the Ryder Cup

Times change, or decay if you prefer, and today the long standing rivalry between two continents encourages savage men to drink over-priced alcohol and shout frenzied hurrays toward the same common victory. Mobs of imbeciles work themselves into a blind frenzy and chant U-S-A! U-S-A! U-S-A! as if they were watching an illegal kick-boxing tournament from the film Bloodsport. The hostility is taken to new lows when they shout belligerently at European players or “Get in the water!” when they tee off. The contemptible fashion is furthered by fans wearing obnoxious, roundhouse kicking pants made from the stars and stripes of an oligarchy. Surely this is not the civilized world Samuel Ryder once knew but a twisted, hysterical version of it, the likes of which could only be compared to Hollywood’s It’s a Mad, Mad, Mad, Mad World, circa 1963. 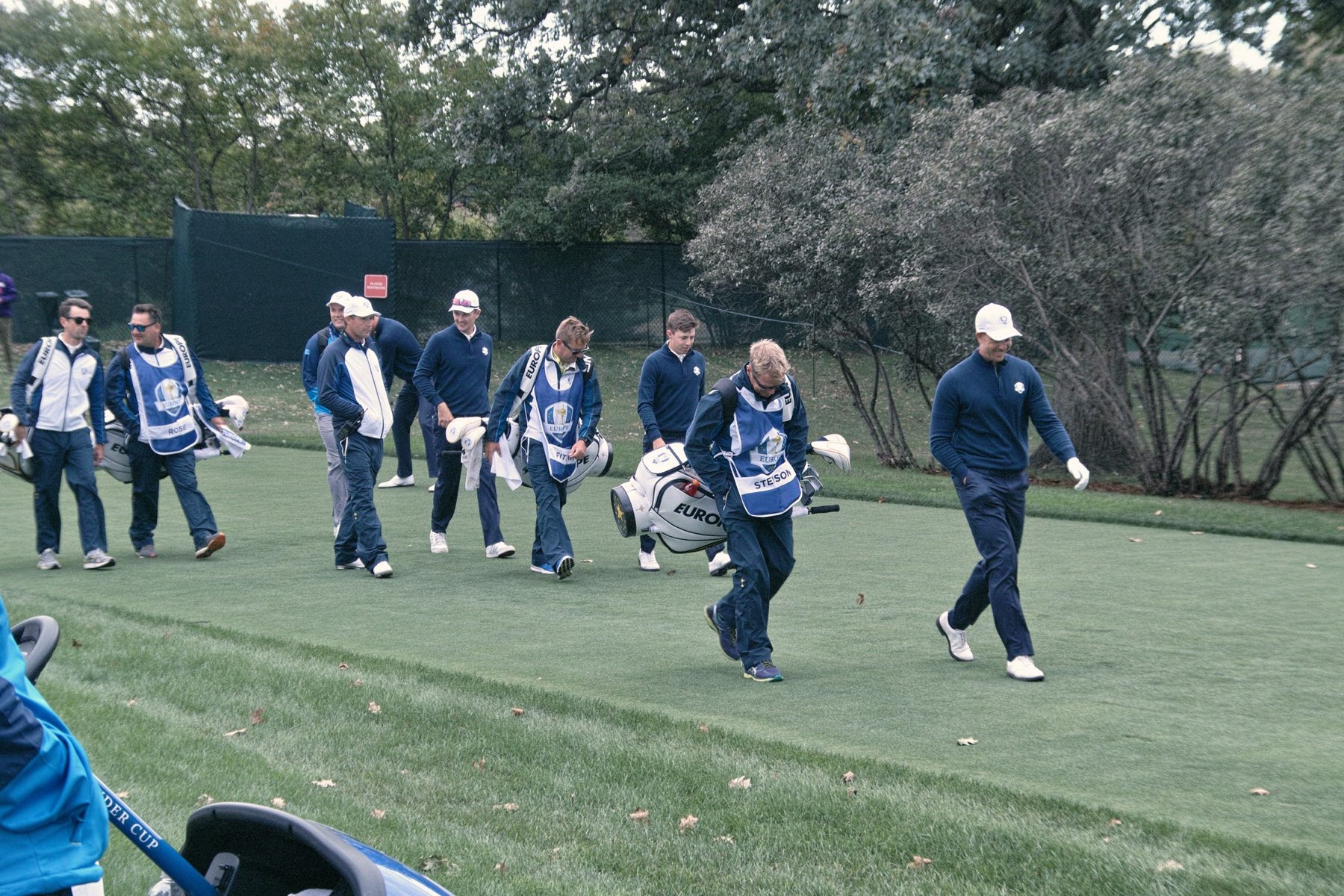 But it’s difficult not to become enthralled by the event when you are thrown into the sea of thrashing exuberance that has fans screaming out in ecstasy every time a ball is struck. If we let go of golf’s decencies and sport etiquette we find ourselves in a surreal adventure, caught in the moment, experiencing stadium golf at its rudest height. We can feel the crowd’s oohs, boos, hisses and awes course through our veins like a drug tickling the heart to beat faster and faster. An uncomfortable compulsion swells in the chest to unite with the congregational roar and become absorbed into it and creating cohesive unity, like the single cells of some larger organism.

The curious conduct of Ryder Cup fans has been blossoming since the first matches began in 1927 but only in the past 25 years has their disrespectful nature finally matured into a shitstorm of unfriendliness. Consider there is little difference between watching play unfold during a high school golf tournament versus a PGA tournament versus the Ryder Cup. It’s the exact same thing, only advertised, and thus perceived, differently. The psychological curiosities of these American sports fans and their collective hostilities towards European players would give B.F. Skinner a hard on.

The Ryder Cup is a heavily commercialized, overhyped Gong Show, but it somehow manages to live up to its own infamous glory because of the millions fans who buy into the mania. Without them, it’s just another good walk spoiled. 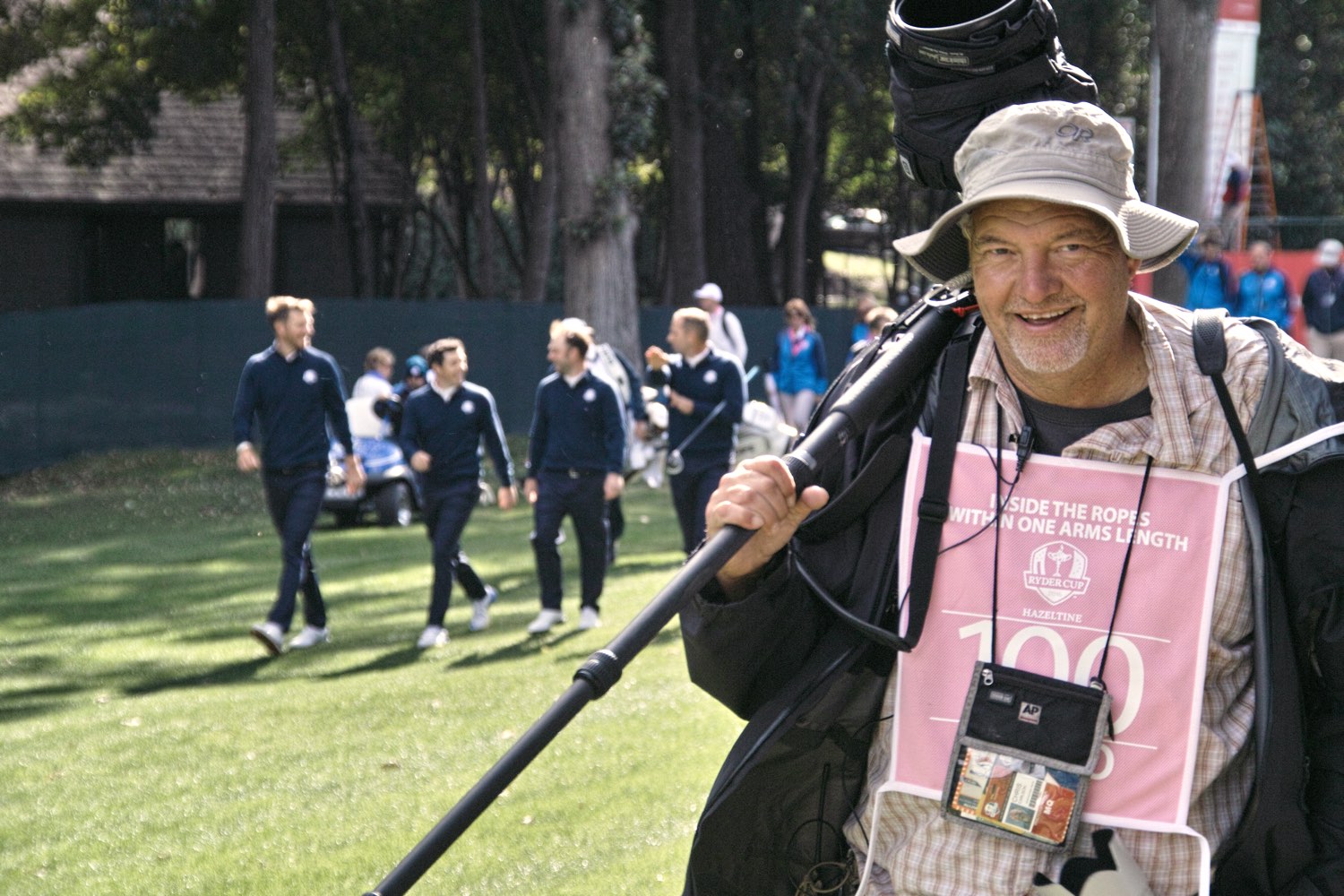 Associated Press photographer shoulders his gear for the next photo opportunity.Chaska, MN

These Guys Are Good

There are an estimated 29 million golfers in America, and the U.S. Ryder cup team has the best 12. These are the country’s top 0.0000004%, an elite group of golfers each at the peak of their game.

The selection process for Ryder Cup players differs somewhat between the United States and European teams, but for most of the roster, it all comes down to how well the golfer has played during the previous year leading up to the tournament. Basically, the top 8 players with the most wins are guaranteed a spot on the team. The remaining positions are left as captain picks. These are generally offered to other highly ranked players or sometimes to a talented youngster on a hot streak. 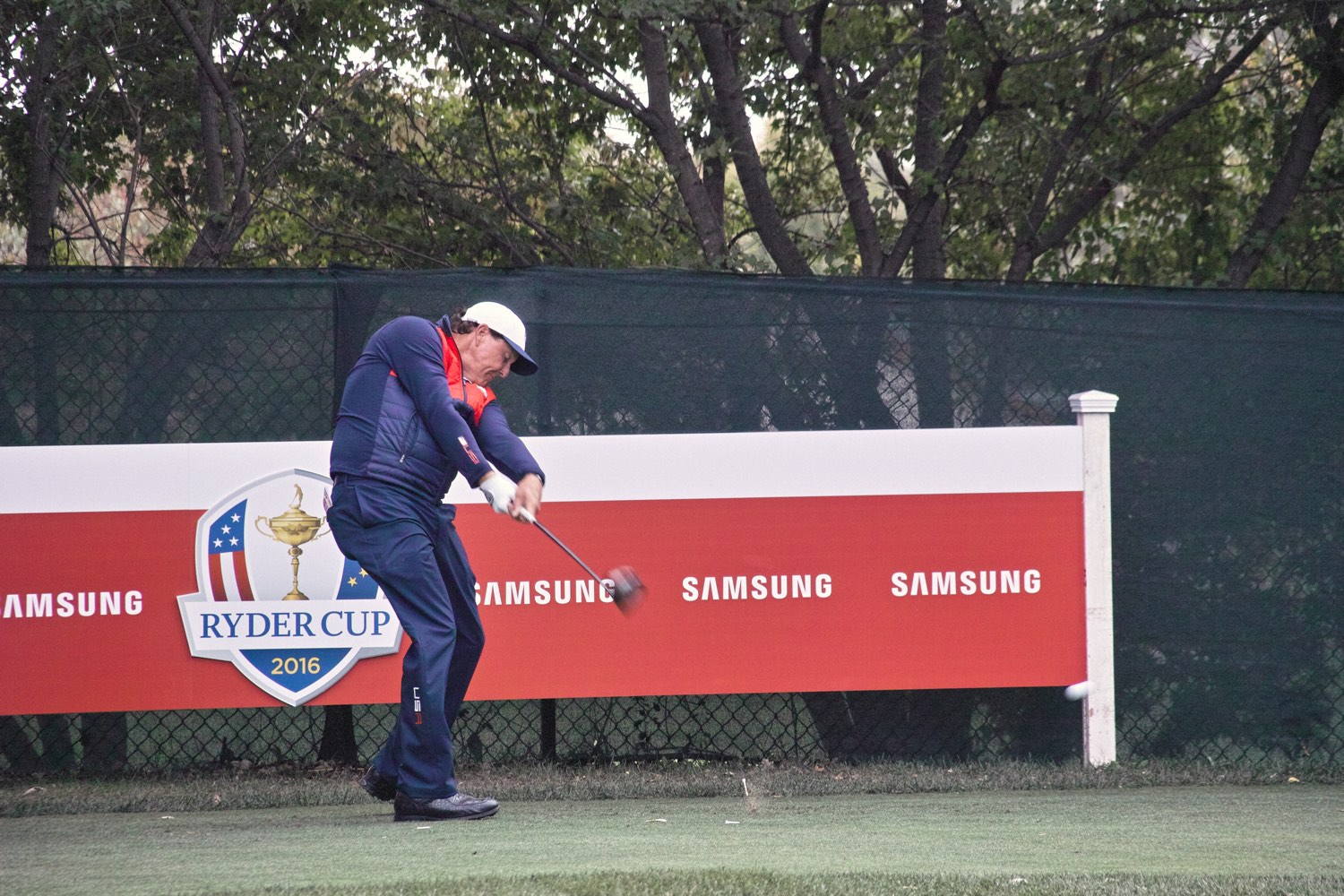 Phil Mickelson squeezes his butt cheeks together and lets one rip down the fairway.Chaska, MN

It’s no joke these guys are good. The confidence and focus they show on the practice range and course is nothing short of inspiring. Silky golf swings launch Titleist golf balls into penetrating trajectories with just a flick of the forearm. Just to hear the sound of their impact is captivating—an authoritative click-thud strike. Spectators crowd fences in an intoxicated study of swing mechanics, lusting after unspoken clues and techniques that could be just the thing needed for their own novice approaches to the game.

The athletes themselves look the part too. Decked out in patriotic clothing from Ralph Lauren, La Coste, and other mid-range fashion designers, these professionals exemplify what every aspiring golfer wishes to be – godlike in their ability, virtuous in their demeanor, exhibiting all the chicness of Vogue Magazine.

Funny thing though, Ryder Cup players are not officially paid for their heroic trials but are instead rewarded with special memories and the self valued honor of representing one’s country. But remember, when athletes play for their country, they’re also playing for all the crackheads, pedophiles, bigots, corporatocracies, political corruption, and so on. They can’t simply pick and choose from an hors d’oeuvre plate of positive traits to represent. It’s all or nothing.

Regardless though, players of today must feel an immense pressure to perform because of the consequential weight of fan disappointment. If they miss a 5-foot putt for a halve, they’re not letting themselves down but their entire team and country. One can imagine needing nerves of steel and a couple stiff drinks to steady the ship before hoisting the sails.

The dark irony of the whole pro bono situation is that this single event generates hundreds of millions in economic impact, and many, including Tiger Woods, have questioned whether players should be paid for their time and hard work when others are left to profit from it.

Should Ryder Cup players be paid? No, absolutely not, and neither should the PGA, or any other vendor for that matter. No other sporting event, except the Olympics, can match the backward meaning of its original purpose.

In 1927, Samuel Ryder created the match because of his love of the game and to share the camaraderie of goodwill with his fellow man. His vision was to bring people together, not pit them against each other in a tasteless dog fight so people holding the leashes could exchange money.

The massive revenues in their entirety could be spent on humanitarian ventures to keep par with with the original philanthropist’s mission – an all profits to charity direction, like Newman’s Own. Ticket holders would then find the $30 for truck-stop-quality lunches fulfilling if they knew the money was being spent to transform lives and nourish the common good.

Where Legends Are Forged

The course location for the Ryder Cup changes each time. In 2016, the event was hosted at the Hazeltine National Golf Club, in Chaska, Minnesota. The renowned golf course architect, Robert Trent Jones, designed the championship course to test golfers with a long and demanding layout. Players were challenged with 600+ yard par-5s and slick greens.

These big, stadium courses differ from small country clubs in that they must provide as many viewing areas as possible. Wide births between holes create bandwidth needed for pedestrian and staff traffic. Use of artificial and natural mounds and slopes along fairways and greens create amphitheater affects for spectators and lawn chairs. 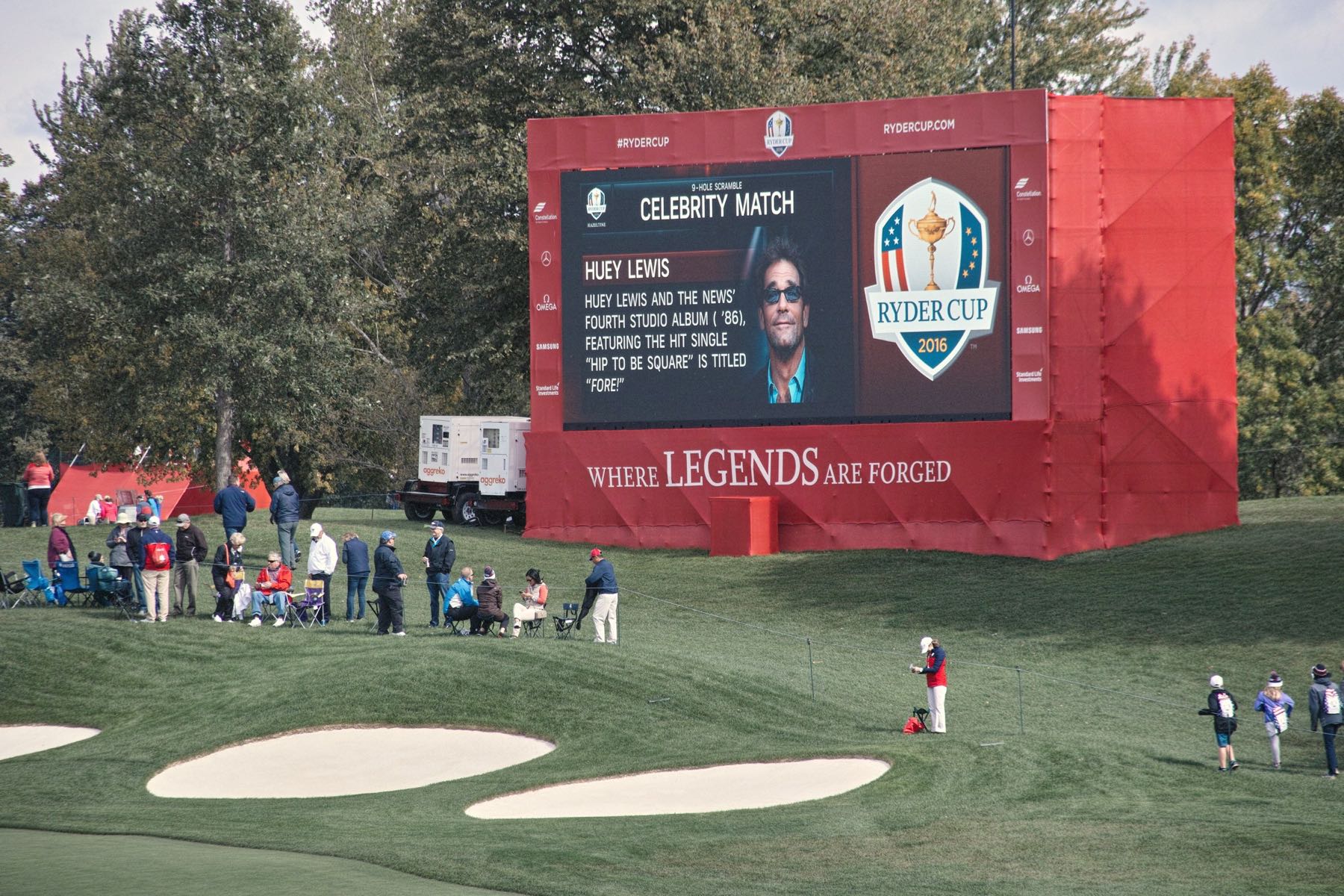 Hazeltine attendance was capped at 40,000 fans per day during the matches. Much like any major sporting event, the infrastructure of modern conveniences was needed on the course so fans could observe, graze and defecate. A small city of shops, booths, food stands and rest areas were erected like Tinker Toys to accommodate the masses. Giant pavilions stood high on elevated platforms near the course entrance, temporary bleachers perched near every green, and brand new, portable johnnies were wonderfully scented before the first depositors. Even the course itself was in beautiful shape, manicured better than a mother scrubbing around her son’s toilet with a toothbrush.

In years past, Hazeltine has also played host to several U.S. Open tournaments for both Men And Women, the 2006 U.S. Amateur Championship, as well as the 2002 and 2009 PGA Championships. 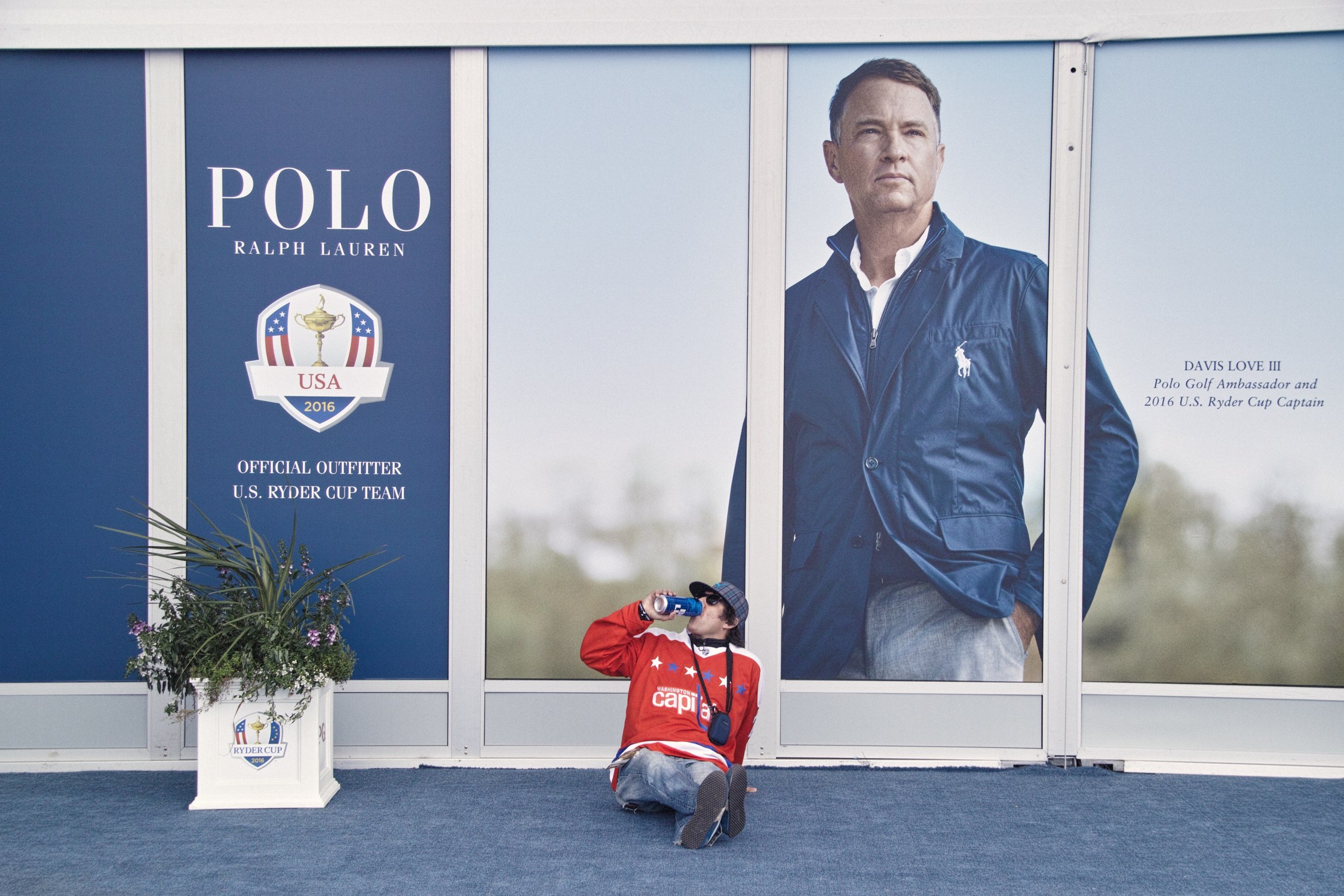 Ryder Cup players take advantage of a heavily commercialized event that brings in hundreds of millions of dollars over the weekend. Chaska, MN

It’s interesting that for a state having five months of nice weather per year it also has the most golfers per capita than any other state in the U.S. In fact, Minnesota is the only state to have hosted all 13 USGA Championships, plus the Walker Cup, Curtis Cup, Solheim Cup, and now the Ryder Cup. That collective feat deserves a Tiger Woods fist pump, or at least a gold trophy.

Worth It’s Weight In Gold

The Ryder Cup is the most iconic trophy in golf, much in the same way the Stanley Cup is to hockey or the Gentlemen’s Singles Trophy of Wimbledon is to tennis. It’s smaller than its brethren, but perhaps, more elegant. The cup stands 17 inches tall, weighs 4 pounds and is made from 14 karat gold, and every person in thw golf world recognizes the glorious accomplishment the hunk of metal symbolizes.

The original trophy was bequeathed to the PGA of Britain and Ireland by Samuel Ryder and remains in the United Kingdom with replicas being used by the PGA of America for promotional events, like picture taking. 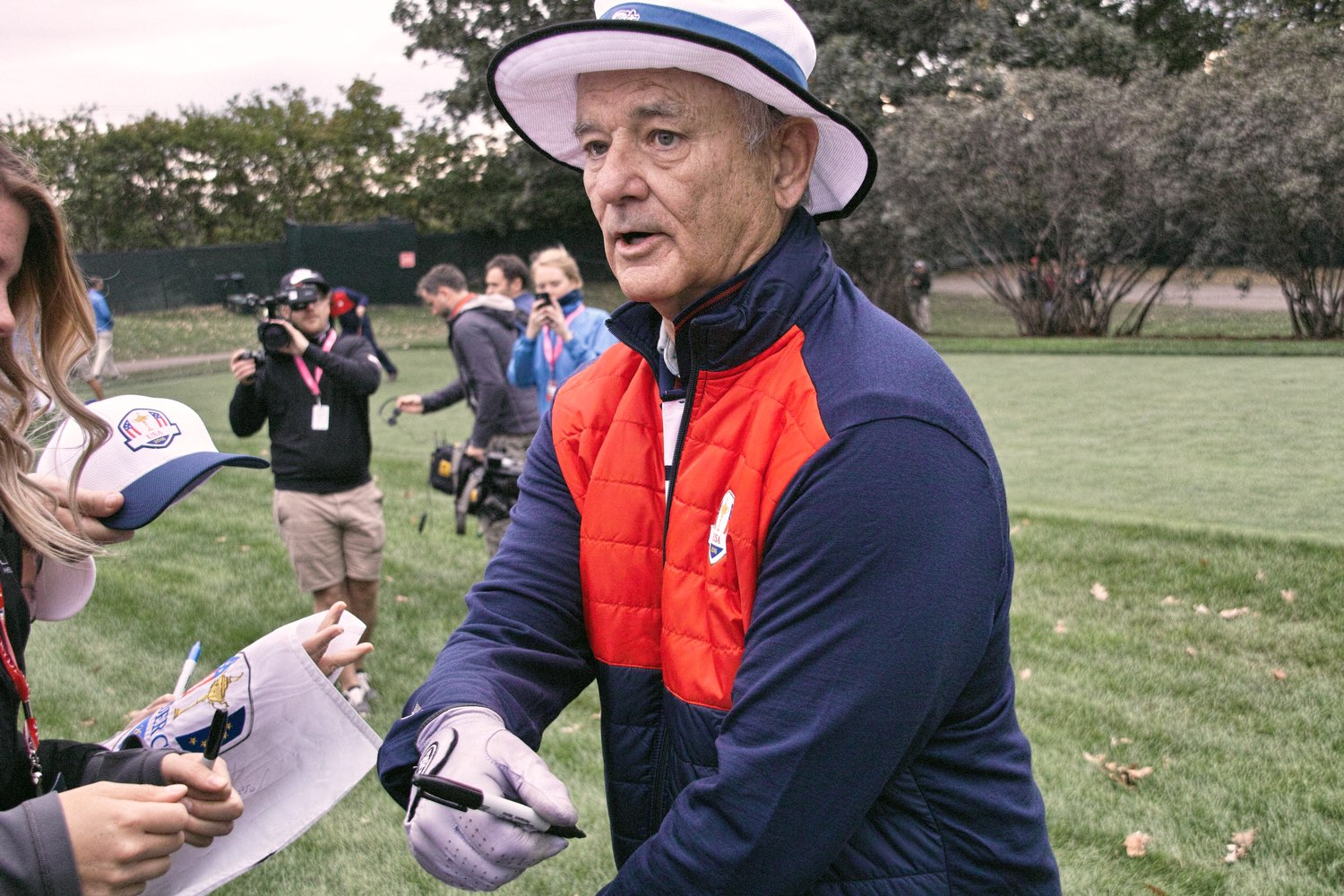 The rich history and grandeur of the Ryder Cup can easily put ideas into a warped mind. It would be fun to purchase a brass replica of the eminent trophy and run around the tournament grounds like a deranged lunatic without wearing pantaloons so bewildered onlookers could gawk and point.

The gold duplicate would be held high in the hands in an effort to coerce bystanders into believing one had stolen the priceless artifact and was indeed making a break for it. Give the my flight path to a hired photographer to take dashing photographs of the wild goose chase.

But would the illusion work or would we only receive responses in the form of disposable social media posts? What could motivate a spectator enough to kick up a dust storm after the trophy in a desperate, do-or-die rescue attempt? Mind you, we wouldn’t be wearing any pants. It’s a wild fantasy for sure, but for those of us who take pleasure in public farces, the potential value the photographs would bring us would be worth their weight in gold.