The Fabric of Our Lives

In December of 2019, the novel SARS-CoV-2 coronavirus, a.k.a. COVID-19, a.k.a. the beer virus, emerged in the city of Wuhan, China and began spreading throughout the world, reaching nearly every nook and cranny of human society. It was like a slow-moving tsunami wave, made of molasses, plunging through the fragility of social, economic, and political well-being. The aftermath was devastating; hundreds of thousands dead, millions unemployed, racism resurged, financial markets ruined, and so many other sad and pathetic afflictions unbecoming of a civilized world. But to members of intelligentsia, the catastrophes of pandemics take on a much deeper meaning if they're understood as a "full systems test" to diagnose any breakpoints or defects in our culture and society.

The beer virus, if you can bear with me in calling it that, exaggerated our shortcomings to an unprecedented degree, exposing deep flaws in basically every aspect of the modern world; whimpering economies that cannot stand on their own two feet, self-serving political systems that prey on mass stupidity, divided and distracted peoples, financial markets that cry out for constant attention, corrupt pharmaceutical industries banking on illness, mismanaged banks and corporations begging for government handouts, healthcare systems that are only capable of treating symptoms rather than preventing disease, and waves and waves of misinformation, paranoid conspiracy theories, and social inequality.

To put it briefly, everything's fucked. That's why people go into full panic mode every time something bad happens. Everything's fucked. There's no long-term stability, no sustainable trust or togetherness, no backup plan for when things inevitably fall apart. It's everyone for themselves; take the money and run. The corporate, political, and religious leadership is so laughably stupid that you kind of have to question how much longer the human species can go on existing. 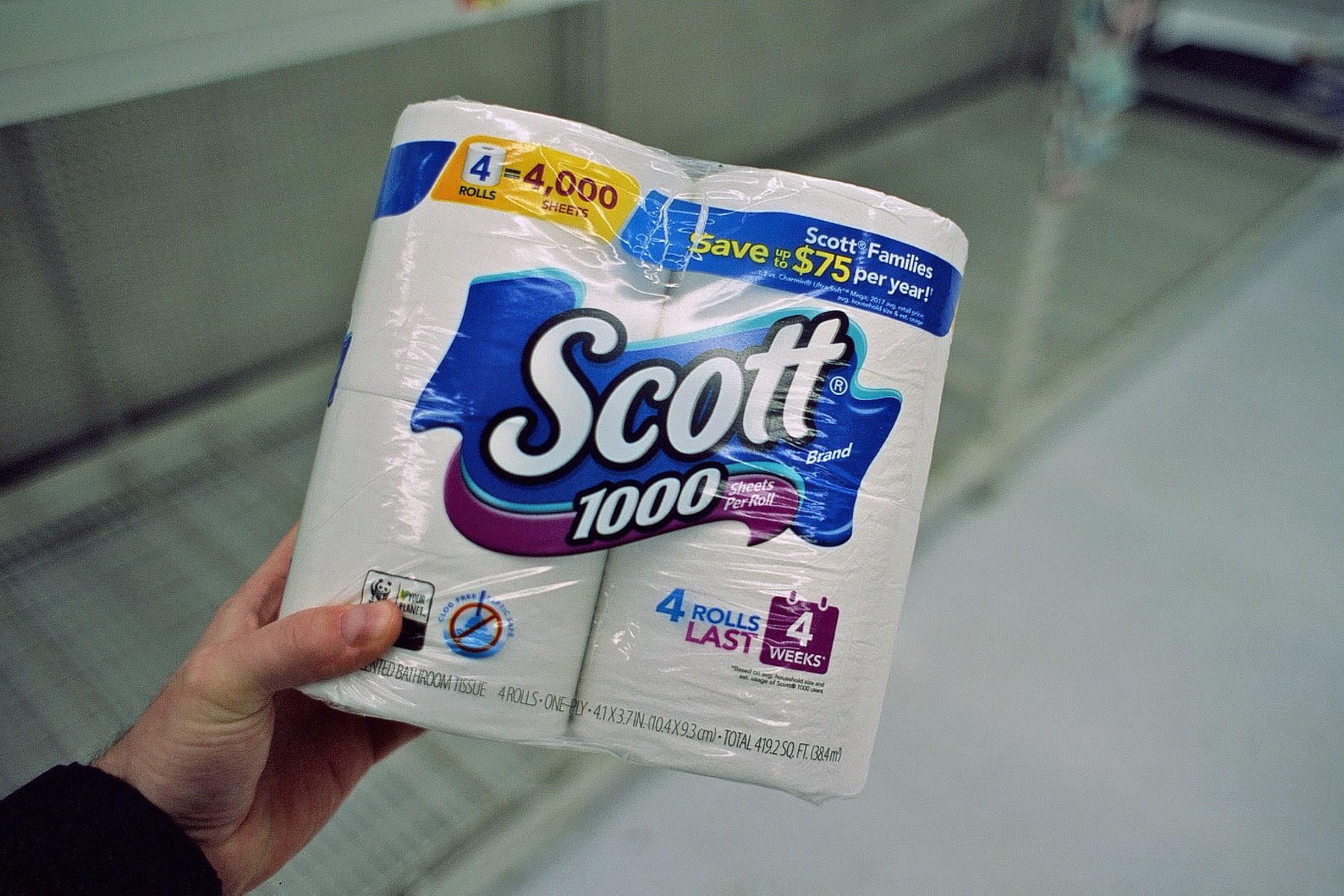 You don't know what you've got until it's gone.Walmart Supercenter

But there is a plus side to all this bother and misfortune. Culture and society are a human construct. It's something we made, and it's something we can change. To put it in Chris Farley's rambunctious words, the beer virus is good!, great!, grand!, wonderful!, because it directs our full attention towards the different areas of our world that need to be spot cleaned, revised, or simply just bulldozed and rebuilt from scratch. This would be the ideal scenario. If something is broke, defective, flawed, or maybe doesn't perform to some benchmark standard, an urgency is felt to roll up our sleeves and take action. Sadly, however, this is not what people care about.

Rather than ponder any alternative reality for our socioeconomic and political problems, people living through the beer virus have tunnel vision and can only see a future path that leads to an immediate return to the familiar. No attempts are being made to learn the history of pandemics or what steps can be taken to mitigate any future risk of infectious disease. Like a herd of spooked animals, people are stampeding in a single, misguided direction, and asking all the wrong questions. When can we get back to our low-income jobs that we don't find intellectually stimulating? When can we afford the excessive cost of health insurance again? When can we over-indulge in fast food, in situ? When can we start dropping cash at casinos and strip clubs again? When can we spend more time away from the family? When can we break from domestic abuse and just go to the bar? Basically, when can we get back to business as usual? 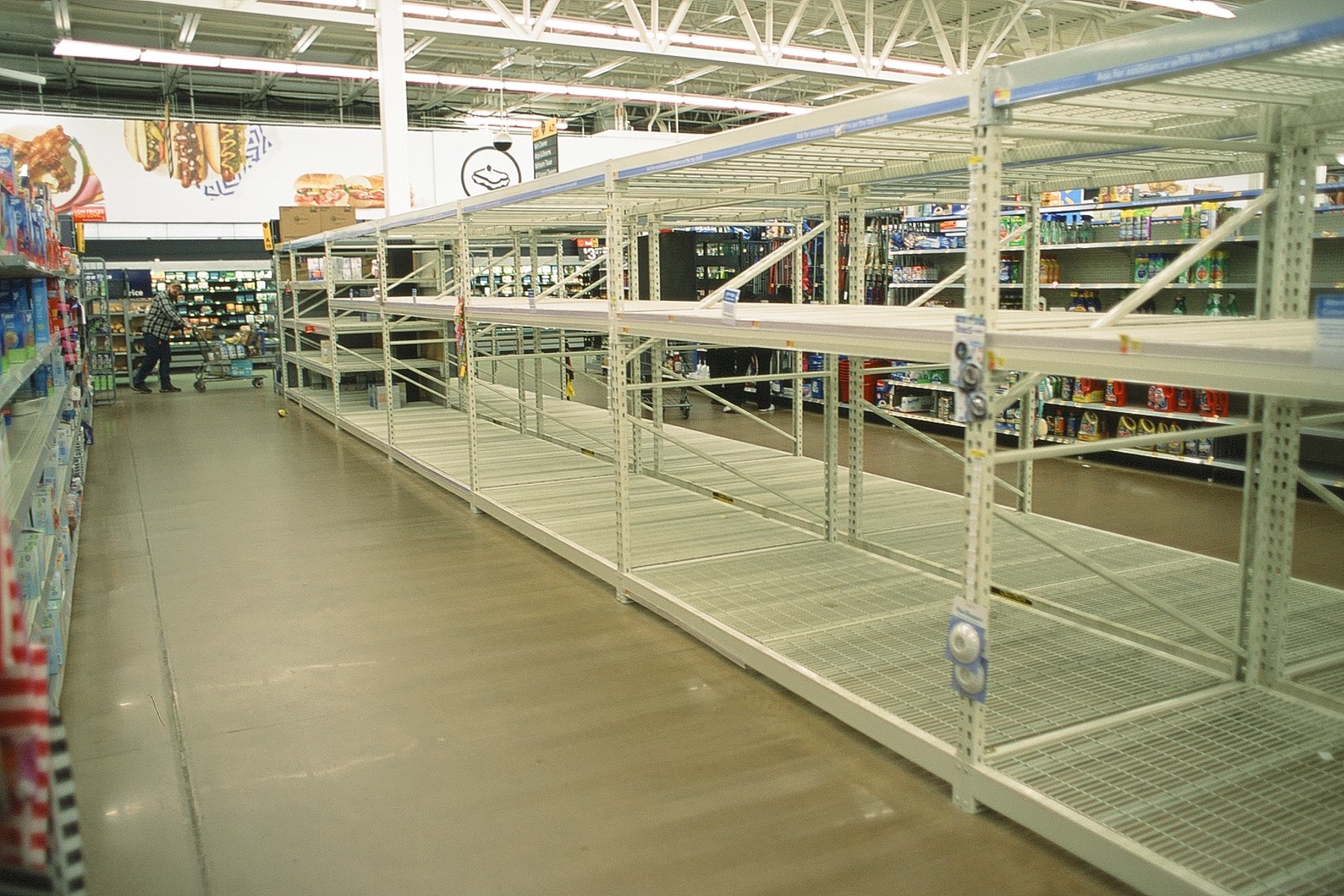 Everyone just sort of stared in horror down the ailes and ailes of empty shelves.Walmart Supercenter

All opportunities for change will be overlooked. Uncomfortable questions avoided. Failure in social, economic, and political systems pushed from memory. Blind determination will rebuild the same delicate world that has tripped and faltered so many times in the past, and that will be that. What people will remember, what this time in human history will be entered into Wikipedia as, is The Great Toilet Paper Shortage.

It started as casual dialogue, or quiet whispers, that by all sense and reason should have been waved away as silly nonsense. Was somebody pulling our leg, having a laugh? It couldn't have been true. We whipped out our smartphones, scanned a few headlines, and then confirmed the facts on social media. The images were everywhere, panic-inducing images that contained aisles and aisles of empty shelves. It was horrifying. Toilet paper was disappearing.

We jumped in the car and rushed to the nearest shopping boulevard. The carnage was something we had to see for yourselves. Department stores, every single one of them, empty. Damn! How was it even possible? It was like an apocalyptic quip from some third-rate comedy-horror film. We drove around for hours trying to buy up what few packages were left of that super soft, Quilted Northern Ultra Plush. Some of us had to go hundreds of miles out of our way to get it. There was nothing online. Delivery estimates were out two or three weeks and increasing by the day. 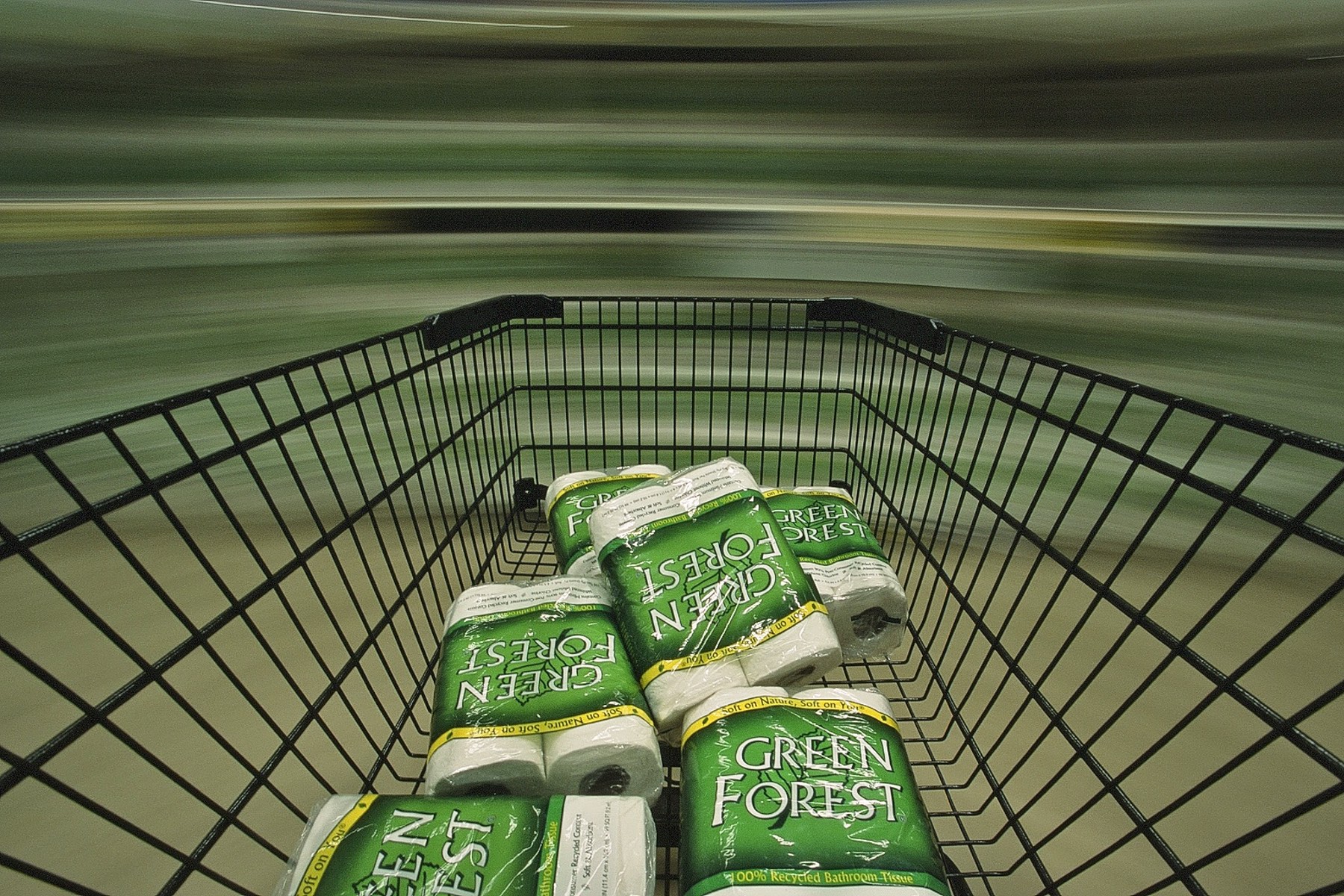 As soon as we caught a glimpse of any tissue paper we piled it into shopping carts and raced to the cashier.Super One Foods

At first, we had to wonder if people were pooping more–not in volume, but in viscosity. Had stools turned mushy all of a sudden, requiring more wiping, more toilet paper? What about hoarding? Were people panic-buying toilet paper as if the world's supply of virgin wood pulp had run out? Psychoanalysts waved their hands around and tried to explain the phenomenon away as Freudian anal-regression. But what of the supply chains, had they failed? There are different product lines for the single-ply, commercial toilet paper we buy for the office and the ultra-plush we buy for ourselves. The stay-at-home orders shifted where we were getting our business done. The imbalance in demand must have sent shockwaves through the toilet paper industrial complex. Whatever the case, it was a perfect shitstorm.

Not in our wildest dreams could we have imagined such a harrowing ordeal. Demand for toilet paper had skyrocketed. As soon as new shipments came in, packages flew off the shelves within the hour. Videos were posted online of people swarming toilet paper. A truck in Minnesota was photographed driving home two pallets of the stuff. Fights broke out at grocery stores. Toilet rolls were being accepted as a form of currency. Tons of it was being stolen from hotels, grocery stores, gas stations, and semi-truck trailers all over the world–Australia, Hong Kong, United States, Britain–it was absolute chaos.

What we are dealing with here is uncharted [territory].Sahil Tak, Vice President, ST Paper and Tissue

Then came the real shortages. Retailers turned to rationing. Bulletins were posted at the front of stores and stuck on empty shelves limiting one package per customer. Husband and wife could be seen splitting up to purchase a package each if they could. Manufacturers of toilet tissue ramped up production, working 24 hours a day, 7 days a week to meet consumer demands. Other product lines were put on hold to increase speed and volume. Capacities were at 120%, but this was to little effect. Stores just couldn't keep it on the shelf. What we needed was 160% more toilet paper. Weeks had gone by and there was still hardly anything. 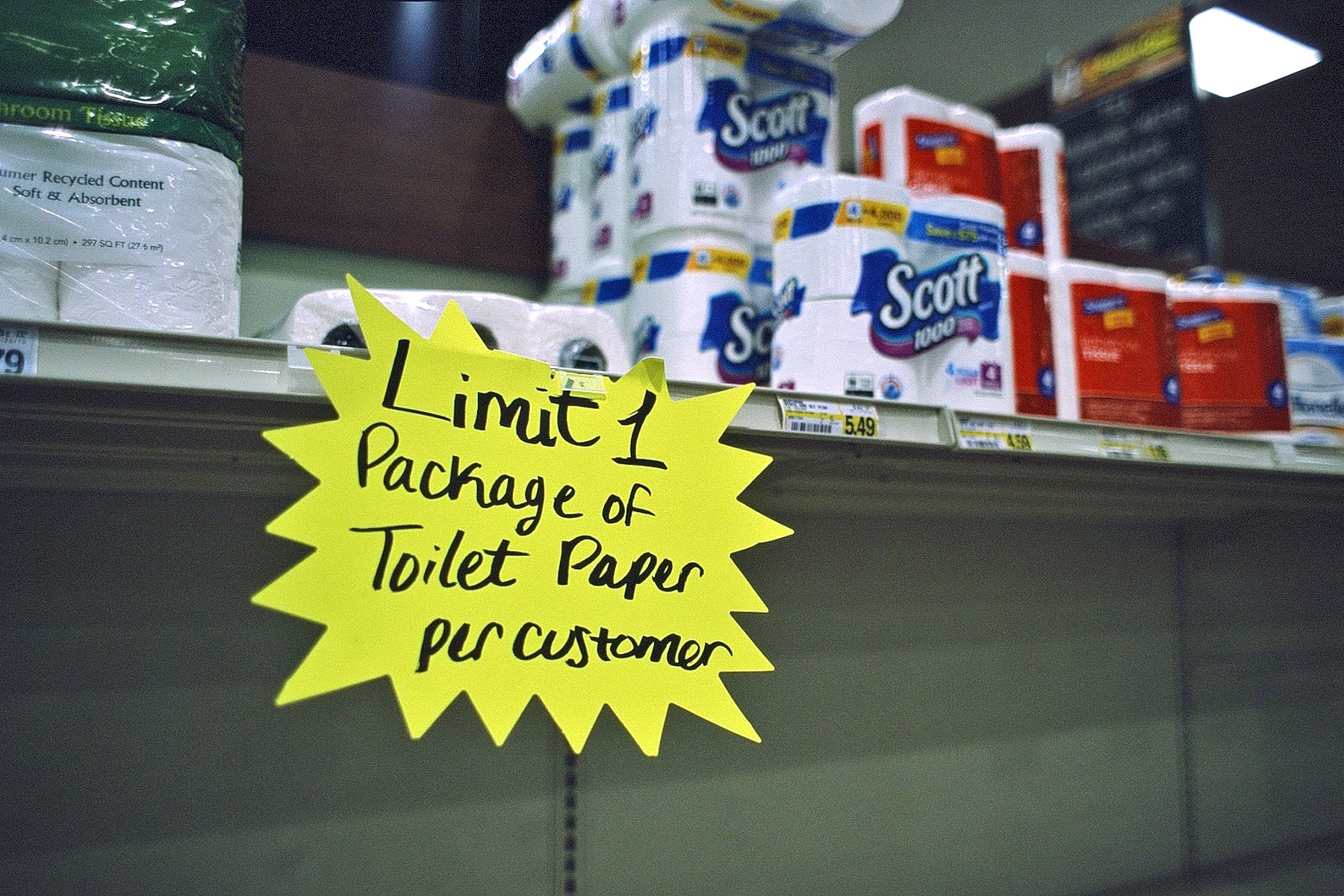 Grocery and department stores were limiting one package per customer during the toilet paper crisis.Super One Foods

It was too unbearable. My hands still shake from recalling such trying times. With no butt napkins left in the pantry what else could we do? We were forced to find alternatives. Paper towels, newspapers, disinfecting wipes, and shredded t-shirts filled in for the three-ply squares and were being flushed down the drain. This caused major sewer and pipe problems. Lift stations had clogged, backed up, and flooded homes with raw sewage. Oh, the humanity!

People who survived the Great Toilet Paper Shortage will pass down the stories of hardship to their children and then to their children's children. Future generations must know of the pain and suffering we had to go through to survive. Of course, our grandchildren might not be so impressed. They might just give us sass, "What the hell, grandpa? Didn't you ever hear of a bidet?"

How To Actually Clean Your Butthole

The history of butt wiping is full of leaves, seashells, fur pelts, corn cobs, and vinegar-soaked sponges tied to the end of sticks, but I don't know if anybody wants to hear about that. People want to live in the now. They want to know what choices they have now that will make their lives better. Should they go with Charmin or Quilted Northern. Do they fold the toilet paper over or scrunch it all together? Do they look at it before flushing or do they avert the eyes? And so on.

A sign at a Holiday gas station sums up what we had to go through to survive. What other choice did we have?Holiday Stationstore

Charmin and all these brands have done a great job making us think that toilet paper is hygienic. It's not."Dr. Evan Goldstein, rectal surgeon

Dry toilet paper is abrasive, like sandpaper. If you get too aggressive, you can tear the thin and delicate tissue surrounding your anus and cause burning pain or bleeding. Is that what you want? The only real solution to this age-old problem is a bidet, and it's called using the right tool for the job.

At first glance, you might think a bidet is just unusually low sink. I mean, it looks the part. But listen jackass, that's no sink for hand washing and brushing your teeth in. It's there for cleaning your back end. It works by spraying a small stream of water at your butthole to rinse off leftover fecal matter, which is what you want, you want it all spick and span. Afterwards, you can towel off excess moisture or, with more modern bidets, a blast of warm air takes care of it. High-tech, huh? 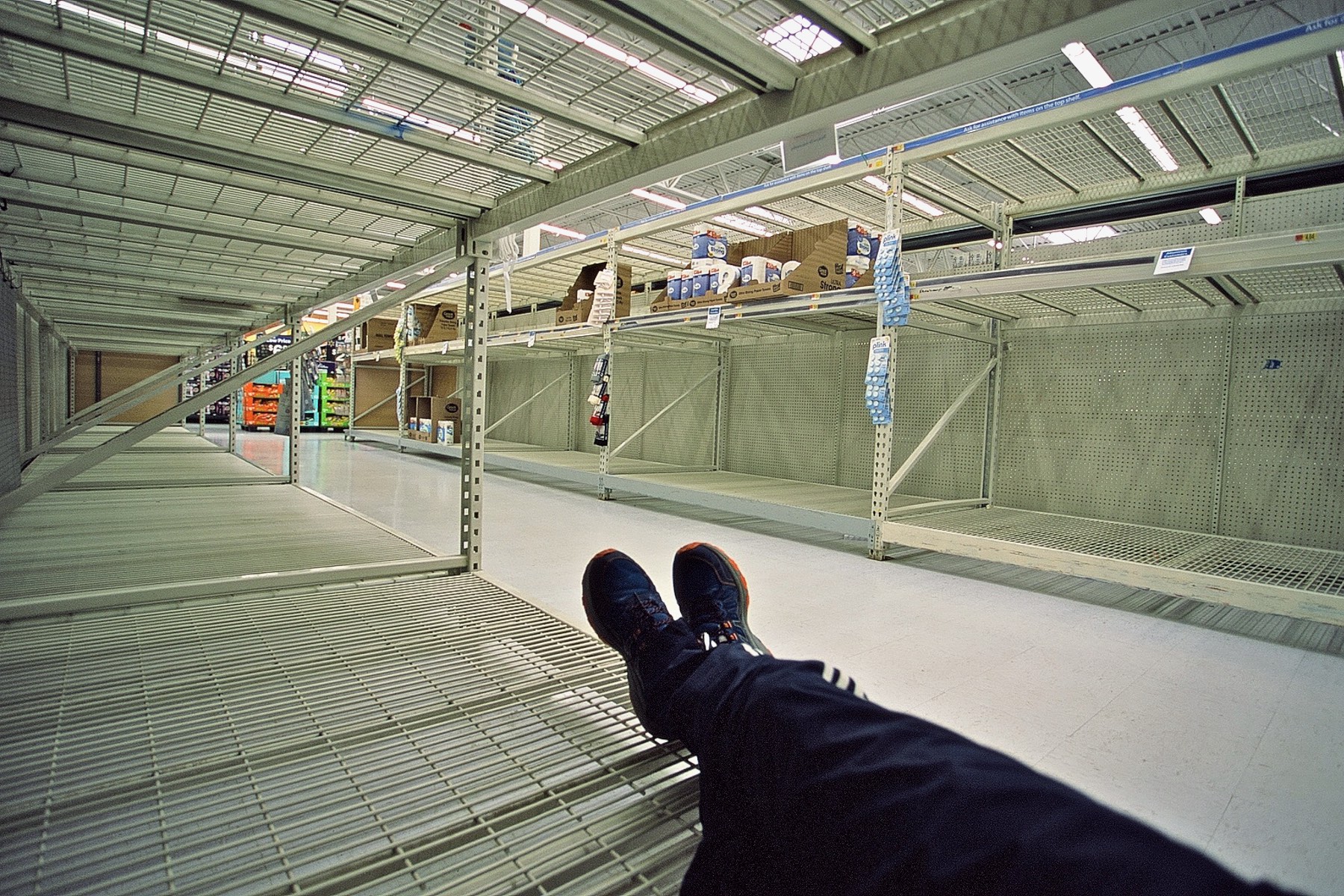 Bidets are actually quite common, or even mandatory, in many parts of the world. But in America, the psychology needed to overcome what is essentially a squirt gun aimed up the wahzoo is just too much. And that's too bad, because washing is cleaner than wiping. In a culture that's so obsessed with cleanliness, how we clutch to the least sanitary method for dealing with our poo is beyond reason.

Maybe avoidance of bidets ties in to the art of manliness. It's just not manly to use a bidet, because at the end of the day, being a man is what it's all about, and there's nothing more manly than living out in the woods, wearing flannel, and chopping wood. Of course, there's no indoor plumbing out in the great wilderness where real men come from. After laying down a healthy steamer, these chiseled, barrel-chested men use their hands, a dab of soap, and a bucket of water. Scout's honor! Of course, you will have to wash your hands afterwards, which is what you're already doing, correct? Just smell your hand from different angles to make sure you got everything. And that, my friends, is how to actually clean your butthole.