The Importance Of Being Idle

Idleness is a virtue. It has as much to do with doing nothing as it does with finding harmony with oneself and experiencing life unhurriedly, exactly as it unfolds. If only there were more of it in the world...

In America, and elsewhere, there is the belief that hard work, duty, and self-sacrifice are the noblest of human characteristics. Children are beaten with the idea that if they work hard enough, anything is possible. And so they grow up with visions of stratospheric success, like becoming presidents, astronauts, and professional baseball players. But if these same children and adults were at all competent with basic arithmetic they would quickly realize that there aren’t enough of these positions open to make everyone’s hard work pay off. So we’re left with buzz-killing resentment and discontent embroidered into the fabric of society.

But regardless of any ugly truths, jobs are seen as the ultimate answer to every individual and social problem we face. Employment is heralded as the most benevolent exercise that every upstanding member of society engages in to pull humanity towards a better tomorrow. Though we can certainly ask, “Better in what way?”

Americans now work the longest hours in the world. And the result is not health, wealth and wisdom, but rather a lot of anxiety, a lot of ill health and a lot of debt.Tom Hodgkinson, journalist, writer, and expert on idleness

We measure the success of a nation not by the happiness of its people but by a single metric, the population of its unemployed. It matters not whether the work is conducive to the human condition or whether the end product or service actually fulfills the hierarchical needs of the individual. Just find a job and work. “Just do it,” is more than just a banal catchphrase but the economic servitude for which people submit their entire lives to, to build a better tomorrow.

This is perhaps the most unattractive flaw of the modern world. The blind progression towards a better economy deems that we work as much as possible while consuming as much as possible. Yes, that totally sounds awkward, but that’s the only way it works. And dammit, we better feel guilty for taking any sick days.

Nobody likes to hear that they’re doing things wrong, but, ahem, we’re doing it wrong. The expenditure of time and energy towards the growth of this abstract concept, the economy, is not the end goal of human existence. If it were, we must concede every army as superior to Shakespeare, every manufacturer of goods as better than Mozart, and every strip joint this side of the Mississippi as contributing more merit to society than the finest works of Van Gogh. 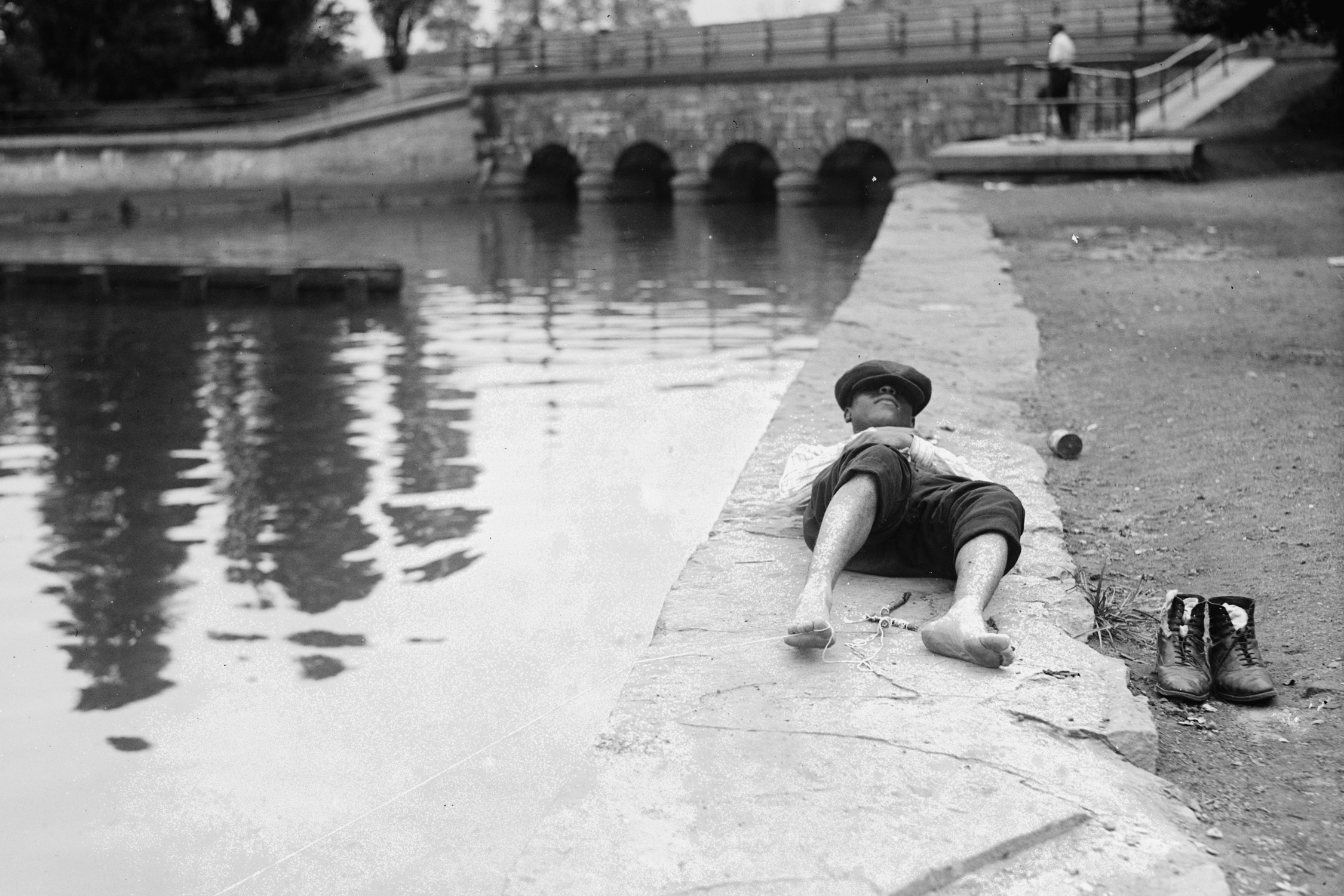 How envious are we to see a man who is able to fish and ignore all the problems of being an adult.New York City

The relentless pursuits of industry, and our naive submissions to them, have prioritized work over leisure, the consequence of which has produced vast waves of economic, social, and spiritual anxiety. Human life is shortened into a quiet desperation of always trying to get ahead. For there will always be something more to buy — more house, more automobile, more health, more clothes, and a host of other physical or virtual purchases that must be rationalized through the rhetoric of “good deals” and holiday sales. Give a man a raise and all he does is spend more. It’s a crippling madness that has passed from each generation to the next as if it were a genetic disease that cannot be scratched away. And with this disease comes the debilitating symptom of forgetfulness as the importance of doing nothing has all been erased from our one-track minds.

Idleness Is A Virtue

Once upon a time, life moved at a comfortable pace. People meandered through their days with calm intention. There was time for skipping rocks across ponds, smelling a sharpened wood pencil, loitering in front of paintings, ambling around record stores, engaging in a proper game of croquet, sipping afternoon tea, watching summer clouds billow in the sky, naps on hammocks, strolling through parks, sauntering through forests, getting a good night’s rest, and chewing food properly. These conscious acts of living, along with many others, coalesce into that curious state of being known as Idleness.

Idleness is about reclaiming human dignity. It has as much to do with doing nothing as it does with finding harmony with oneself and experiencing life unhurriedly, exactly as it unfolds. 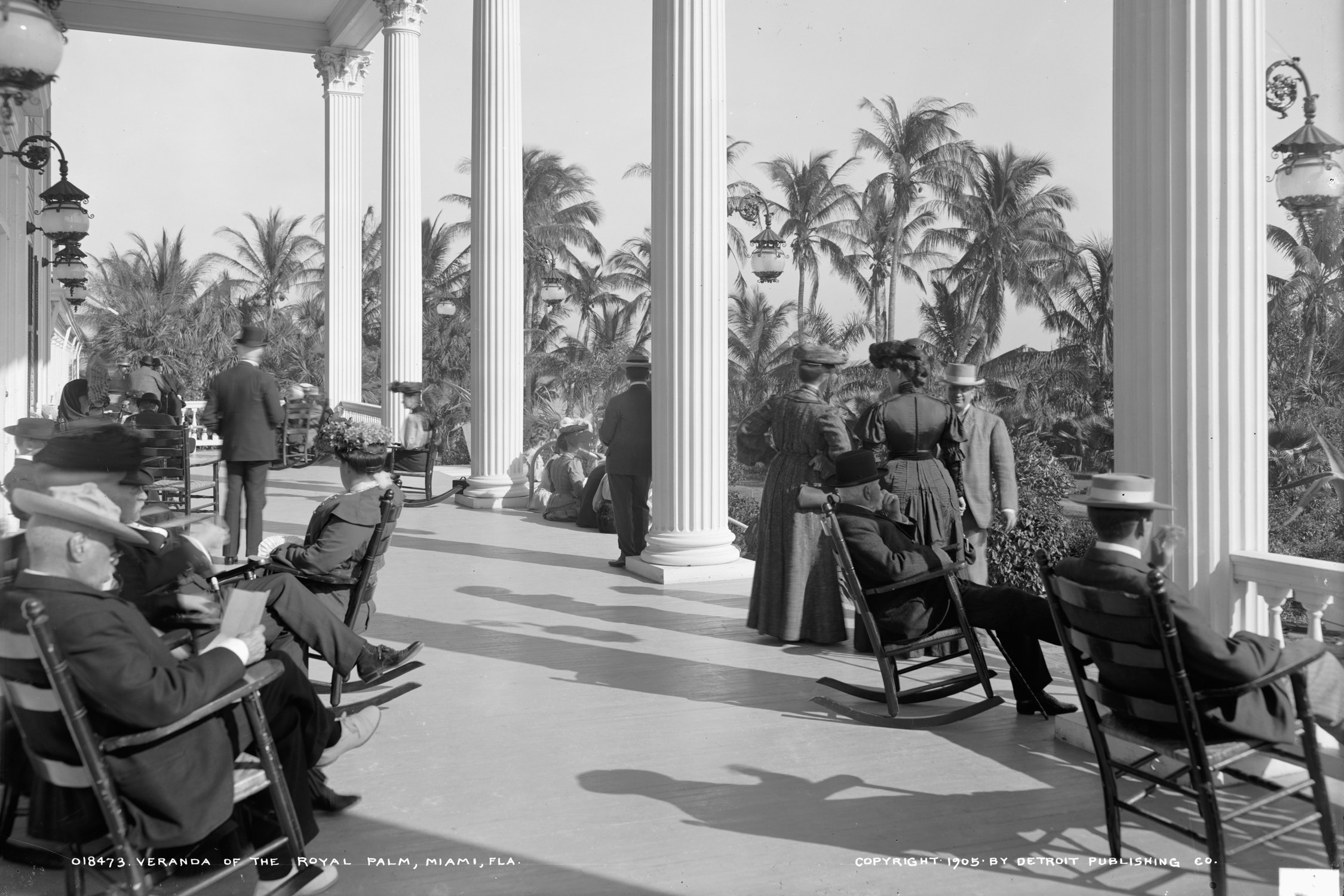 Experiencing life unhurriedly is a blissful state of being more easily attained through the gentle motion of a rocking chair.Miami, Florida

As individuals, we find pleasure in an assortment of different activities, but there is no enterprise that gives us more pride and satisfaction than in the honorable pursuit of creation. When the surplus of time blesses our own little worlds, we find idleness. The human mind loves these particular moments of physical inaction because it’s in this slothfulness that the brain gets to flex and enjoy itself with the sport of contemplation, creativity, and imagination. These activities require no effort beyond the ordinary and unavoidable operations of the human intellect and will produce literature, poetry, philosophy, art, music, and every other component of civilization we hold sacred. So naturally, idleness is a virtue.

Despite all the beauty and integrity found in spending one’s time in a non-industrious state, idleness has been attacked relentlessly by authoritative figures in business, politics, and religion, who make outrageous claims like, “Idle hands are the devil’s workshop.” I can’t imagine a more unintelligent thing to say — to suggest that sitting around the house smoking pot and playing Super Mario Brothers all day leads to evil intentions. Idleness does not create atomic bombs, gas chambers, factory farms, central banks, Big Pharma, corporate takeovers, or genocides of indigenous peoples. Criminal behavior takes a shit ton of hard work.

More evil is done under the cloak of business than was ever contemplated by all the idlers the earth has known.Gilbert Quin, In Defense of Idleness

The comedian and social critic, George Carlin, once said, “I do this real moron thing, and it’s called thinking. And apparently, I’m not a very good American because I like to form my own opinions.” Thinking for oneself is probably the most compelling reason to become idle. In today’s world of constant rushing to get things done, there’s little, if any, time left for contemplation. The idler appreciates the value of deep reflection. But more importantly, he values the freedom to do so. Hard work be damned. Liberty and idleness are the moral equivalent here. If we honestly value freedom, then we must have more idleness.

In the year 1932, the twentieth century’s most important thinker, Bertrand Russell, published a short essay titled, In Praise of Idleness, in which he presented common sense ideas on work and leisure. He proposed the ultimate goal of work should be the creation of technology and infrastructure needed to liberate humanity from excessive toil and trouble — that the aim of human ambition should not be the everyday rituals of financial growth and voluntary slavery but the freedom to pursue the things that bring us inherent joy and happiness. 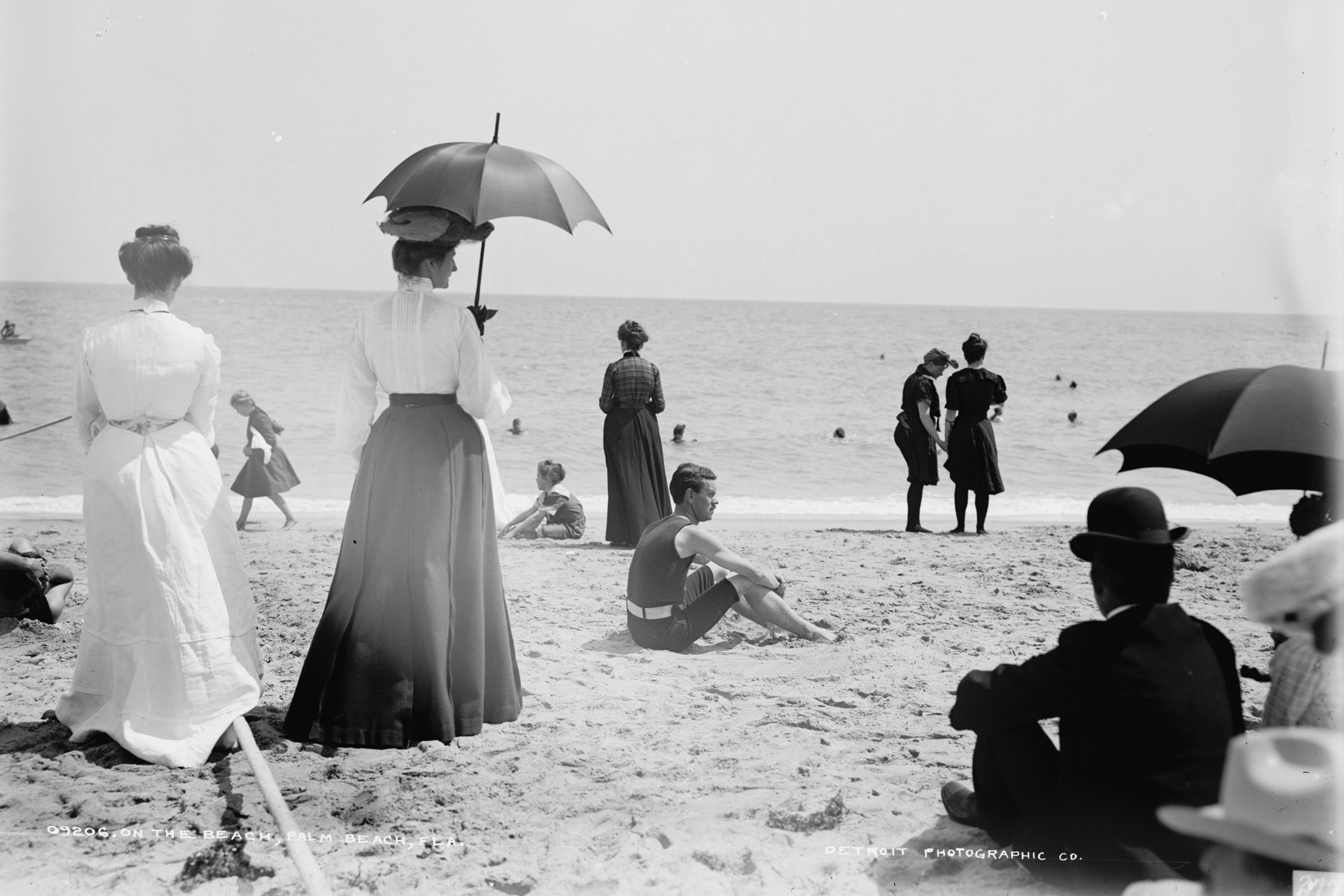 The ideas in Russel’s poignant essay are a slap across the face to the cultural work-paradigms we inherit from the Industrial Revolution, which, by the way, celebrated child labor and created industry monarchs like Henry Ford who spewed forth the propaganda, “There is no place in civilization for the idler. None of us has any right to ease.” Of course, Ford was a businessman who required mindless worker bees for his assembly lines and more affluent consumers to purchase his goods. Ford’s angst against idleness was not for the benefit of mankind but for his own self interest.

I want to say, in all seriousness, that a great deal of harm is being done in the modern world by belief in the virtuousness of work, and that the road to happiness and prosperity lies in an organized diminution of work.Bertrand Russell, philosopher, logician, mathematician, historian, writer, social critic, political activist and Nobel laureate

If we, as the collective human race, decided to work half as many hours per day and progress half as quickly to whatever unseen and undefined target humanity seems to be rushing towards, would that be to everyone’s satisfaction? Some would certainly say so. Numerous companies and organizations found in countries such as Iceland, Sweden, Finland, Germany, and New Zealand have experimented with shorter work weeks to improve employee moral. 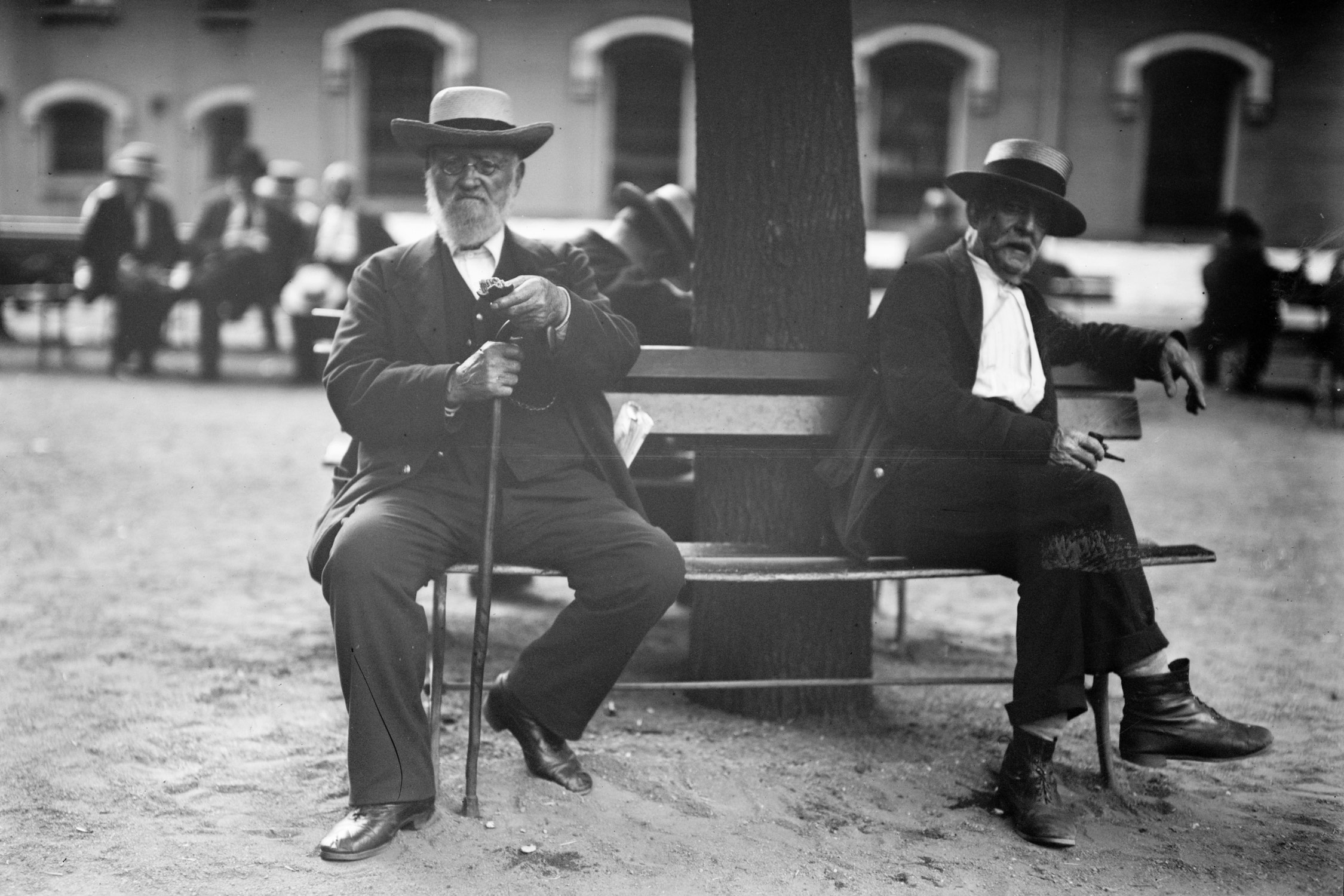 People watching is a simple activity that brings about pleasure in seeing the mysterious and the banal in others as they go about their business.Staten Island, New York

Everyone understands how the obligation of work suffocates a person from having much of a life beyond their job. Though, few decision makers are willing to do more than just dip their toes in the water. We need to stop pussyfooting around and just dive in because if you look at the daily rituals of history’s most creative figures we find they loaned us fewer hours than their counterparts of today. Charles Darwin, for example, would say, “I’ve done a good day’s work,” after about four hours of work. But on this abbreviated schedule, Darwin somehow published 19 books and technical volumes, including the greatest book in the history of science, The Origin of Species.

Having the time to actually think allows the mind to wander, and in doing so it becomes free to solve problems without the pressure of being forced to. Being idle allowed Darwin to pursue things he found interesting, and in this way, the activities remained charming and amusing, and his work, original and highly productive.

Let’s take a moment to understand that the objective of shorter work days is not to save industry money through the productivity of happier employees. It’s to invest in humanity. By increasing idleness, we are in effect growing the creative arts and the culture that defines our place in history. Combine this with the fact that being idle improves the mental health and well-being of the human animal and we are left with a rather obvious conclusion. Idleness is the catalyst that will build a better tomorrow.