There is no greater achievement in the pages of human history than that of the written word. It's the dark squiggle of alphanumerics strung together as sentences, composed into paragraphs and bound into books that offer the quintessential path towards true enlightenment.

There is no greater achievement in the pages of human history than that of the written word. Without text and the eternal wisdom contained within man would still be hibernating inside the delicate walls that shelter illiteracy, crippled by the dark recesses of his poor memory. Reading gives rise to the inspiration and creative surges needed for every discovery civilization has had or will ever have. It is the dark squiggle of alphanumerics strung together as sentences, composed into paragraphs and bound into books that offer the quintessential path towards true enlightenment.

Books are a special thing. The study of science, philosophy, art, music, mathematics, and everything worth knowing is condensed into clear form and presented with a particular beauty found only in this paper medium. The consumption of books has an indescribable power to ignite the alchemy of the mind, transporting it across space and time into the life of another, to see the world through their eyes and to feel the things they felt. The result of this life-changing experience strengthens our understanding of the world from the wisdom of men far greater and more competent than any of our current selves. Lost between the pages we discover previously unknown territories and acquire new knowledge that our naivety would never have known otherwise, and after the book is put down we return to reality with a much broader perspective.

A reader lives a thousands lives before he dies. The man who never reads lives only one.George R.R. Martin

Reading with attentiveness is by itself the most potent cure for the overriding tenet the mind contracts at birth: ignorance. No person should let their self be anchored to the mooring of inflexible thought. Books are the best provisions a man can take as he sets sail on life’s endless ocean searching for those yet to be discovered truths. The rich diversity of reading sharpens the faculty of judgment, hones it like a Masamune blade and gives us an edge to cut through the cornucopia of hysteria and bullshit that bombards our senses every day. 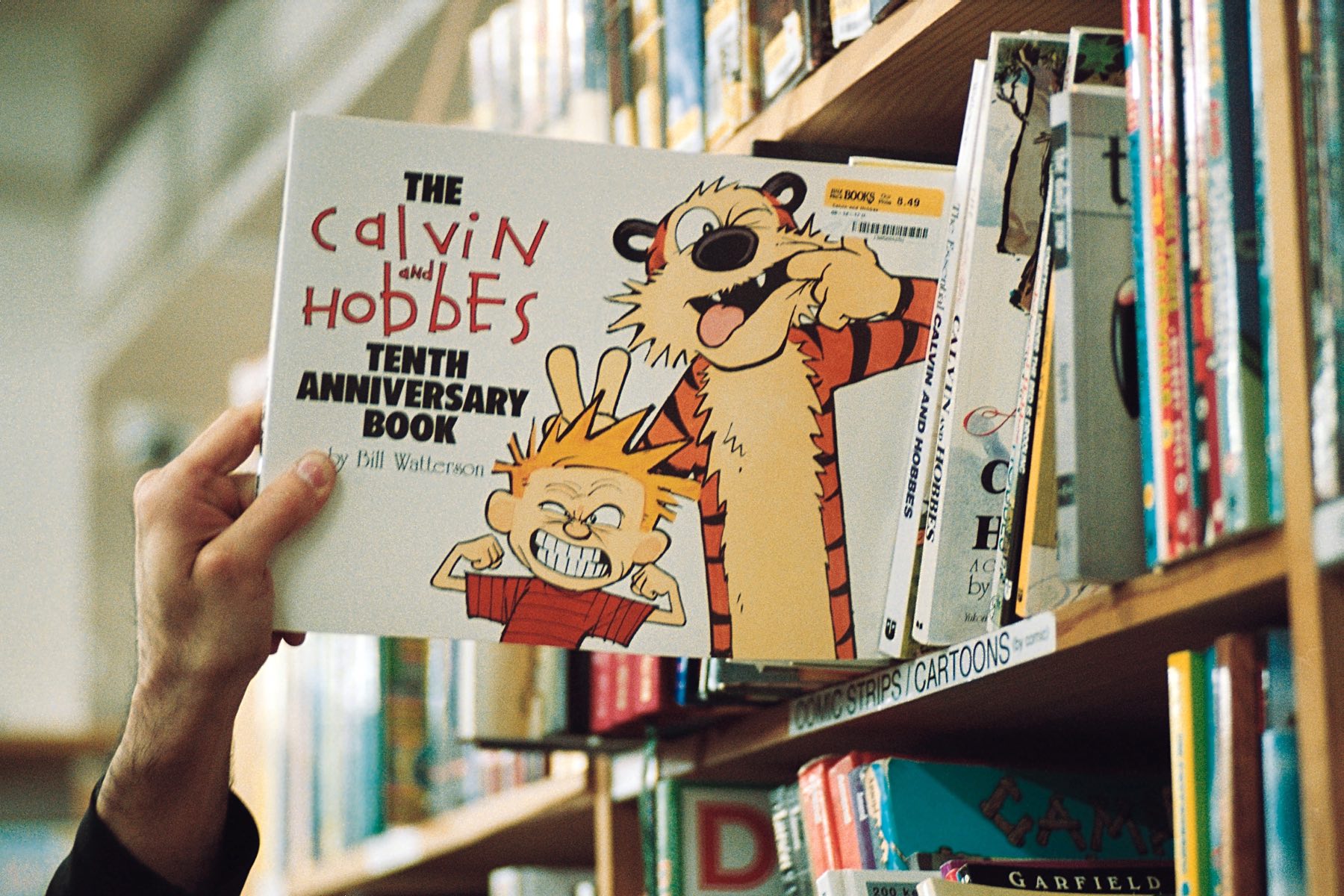 Strip for strip the artwork and philosophy of Calvin and Hobbes edges out Peanuts as the best comic strip ever made.Half Price Books

Reading requires no heart-pounding effort and yet the simple task affects the mind as exercise does to a body.

Books expand a person’s awareness to see all that is and all that could be. Because of this alone, reading populates the world with more polymaths, eclectic individuals cross-fertilized with vast amounts of accumulated knowledge spanning numerous disciplines and cultures. Da Vinci, Montaigne, Goethe, Franklin, Asimov, Chomsky, and Jobs to name a few. The advantage with polymathic endeavor is unparalleled innovation through problem solving skills stemming from the sagacious awareness of seeing the unseen interconnectedness.

Always have books in the queue. Never stop reading. Doing so would suffocate the mind’s natural investigative urges. Through the exploration of ideas and information, reading becomes the ideal activity for advancing culture and creating a better humanity. It’s the ultimate recreation, something that should be honored and cherished. Though, the more we enjoy reading the sooner it is we discover the most tragic fact of life. There just isn’t enough time in a single life to read all the books one would like.

Naturally, not all books are worth reading, but even so, far too many fascinating volumes are left on the shelf, and still a greater number left undiscovered because Time is a sonuvabitch. How does a lover of the printed word find the time to read all those hidden gems?

How To Read Every Book You’ve Ever Wanted

As part of his doctoral program at the University of Sussex in England, Dr. Michael Rose experimented with selective breeding of the Drosophila Melanogaster fruit flies in the 1970s to study the effects of aging. By discarding eggs and only allowing females to breed once they reached a target age, the flies who could still breed in their maturity passed their genes on to the next generation. This intentional delay to reproduce coaxed these bothersome little insects into living much older than their ordinary brethren. And it didn’t matter how hard the scientist pushed, each generation of flies would just keep living longer and longer. His subjects eventually became known as the Methuselah Flies and were also shown to have greater resistance to infectious diseases as well.

The same experimentation could be performed on people to arrest natural selection and give us control over our biological aging. Man’s tireless search for the fountain of youth is, in fact, found within his own genetic potential. By imposing a minimum baby-making age, we could extend a human lifetime by leaps and bounds. Had this methodology been implemented a thousand years ago, the average human lifetime by now could be 150 years or more! 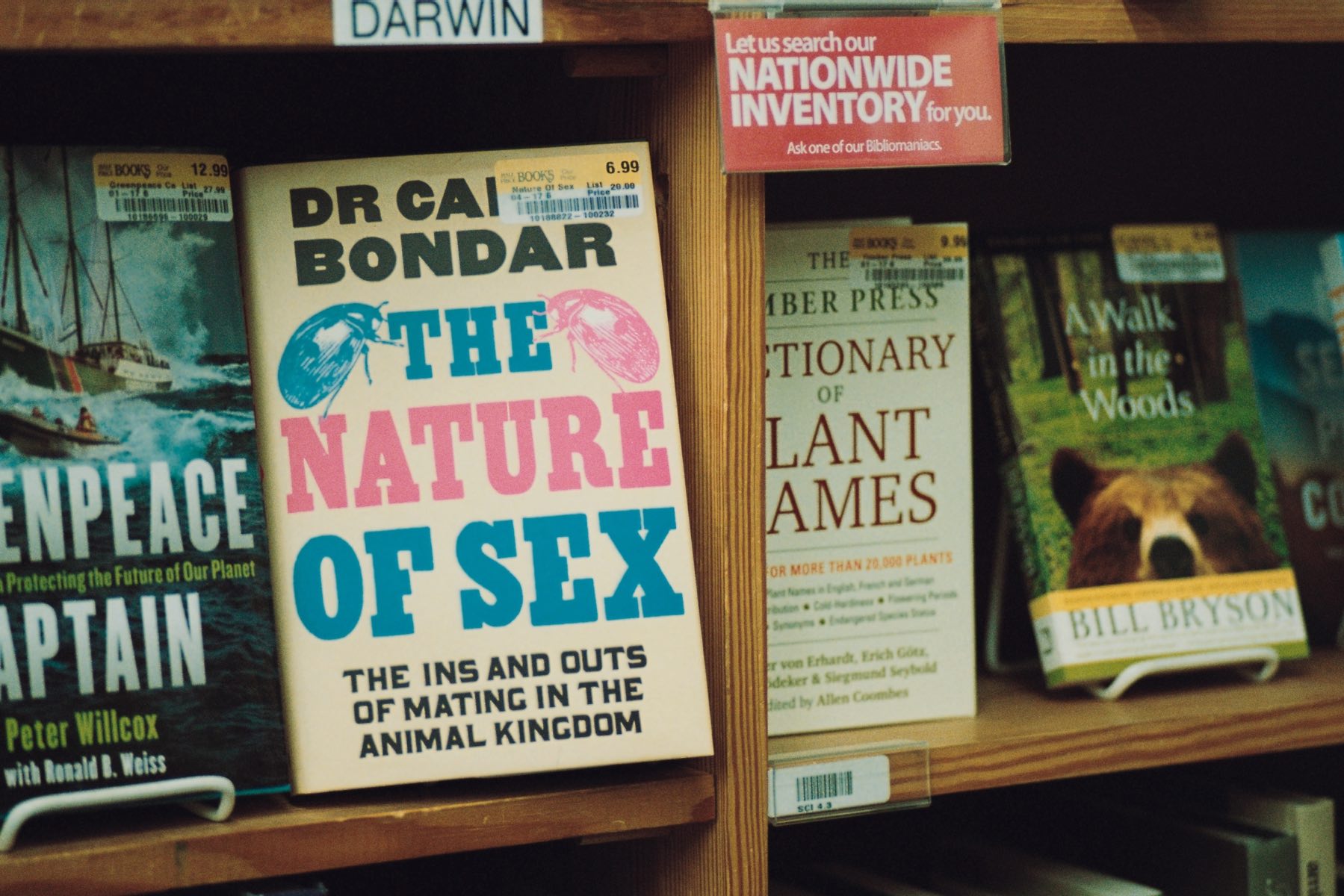 A good bookstore will carry volumes on any and every subject.Half Price Books

But would such a taboo suggestion be ethical? Of course not, at least not by today’s emotionally derived values. Yet, this Darwinism is exactly how life has made it this far. The greatest of the great apes, humans, have evolved to live long enough to raise its young, but beyond that, Evolution doesn’t care. Evolution has no interest in longevity. Rather, it’s more interested in making sure life propagates and that’s it. Just look at Pacific salmon. The fish are a classic example of a semelparous animal. They have a single reproductive episode, and then they die. Postponing breeding to forestall aging would be a rather clever solution to the chimera of longevity.

But despite this “all natural” way for human beings to advance their physical limitations, the biological means to longer life might come in the form of cultured tissue and organs implanted into the body as replacement parts for our worn out or neglected bodies. We might one day schedule appointments at human repair shops the same way we take automobiles in for repair now. A change of fluids, or a quick tune-up with stem cells and lasers, and we’re on our way. Actually, this might just be a short-sighted projection of the limited capacities we already have.

A more likely scenario is one where the world’s best scientists focus their energy on genetic manipulation in the embryonic stage, or gene therapy techniques later in life, to wind our biological clock tighter. This would be the preferred method for the general population. The less thought and effort we have to put into something the better. To hell with 6-minute abs. Just give me an electric muscle stimulator to tie around my gut and that can do the work for me. D’you know what I mean?

Researchers at the Spanish National Cancer Research Centre in Madrid, Spain experimented with a gene therapy procedure in 2012 with one-year and two-year-old mice. The small rodents were treated with a virus that contained a telomerase enzyme meant to lengthen the tips of their chromosomes, the telomeres. The one-year-old mice who were given the enzyme had a median lifespan of 24% longer than average and the two-year-old mice managed to live 13% longer. Both sets of mice had other appreciable improvements to their health like neuromuscular coordination, insulin resistance, fitness, and so on.

Not to jump the gun or anything, Elizabeth Parrish founded a biotech company called BioViva in 2015 to expedite the development of telomerase enzyme treatments to delay this disease she calls “aging”. Parrish is so confident in the gene therapy technique that she, at age 45, became patient zero and underwent the treatment herself, just like the rodents. Will her bold step wash away years of living and prolong her life? Only time will tell.

Anti-aging is still a young science. It could take us years, decades, or even generations before we figure it out. Until then, we’ll keep our genetic defects and surrender to the ethical values of our time. But imagine the number of books that could be acquired and read if the human lifespan were extended as little as even 20 years. Where would we put all our extra books?

A Library In Every Home

Every home should have its own quiet library to leave discord and idle chatter behind. Enclosed within the space of this sacred room, the history of the human spirit could be condensed into the pedantic form of bound hardcovers standing shoulder to shoulder on shelves reaching up to the ceiling and spanning the surrounding walls.

Elegant lamps would look down on leather sofas or reading chairs to illuminate the pages with a soft, yellow glow. And if the lack of bookshelves permit, large paintings would decorate the walls as lavish furnishings to create a well-to-do atmosphere of extreme sophistication. The homeowner would boast about his vast library and take a special pride in the cultivation of human knowledge that could be had from it. No expense should be spared in this construction of the finest room in the home. The return on investment would be more than worth it.

Whatever the cost of our libraries, the price is cheap compared to that of an ignorant nation.Walter Cronkite, the most trusted man in America

There will always be a place for real books, even in a digitized world. Without question, books feel natural in the hand, their physical construction and the fibrous pages have a dignity and authority that’s eternal. How can an intelligent person not be aroused by the mere sight of an exquisitely published hardcover? 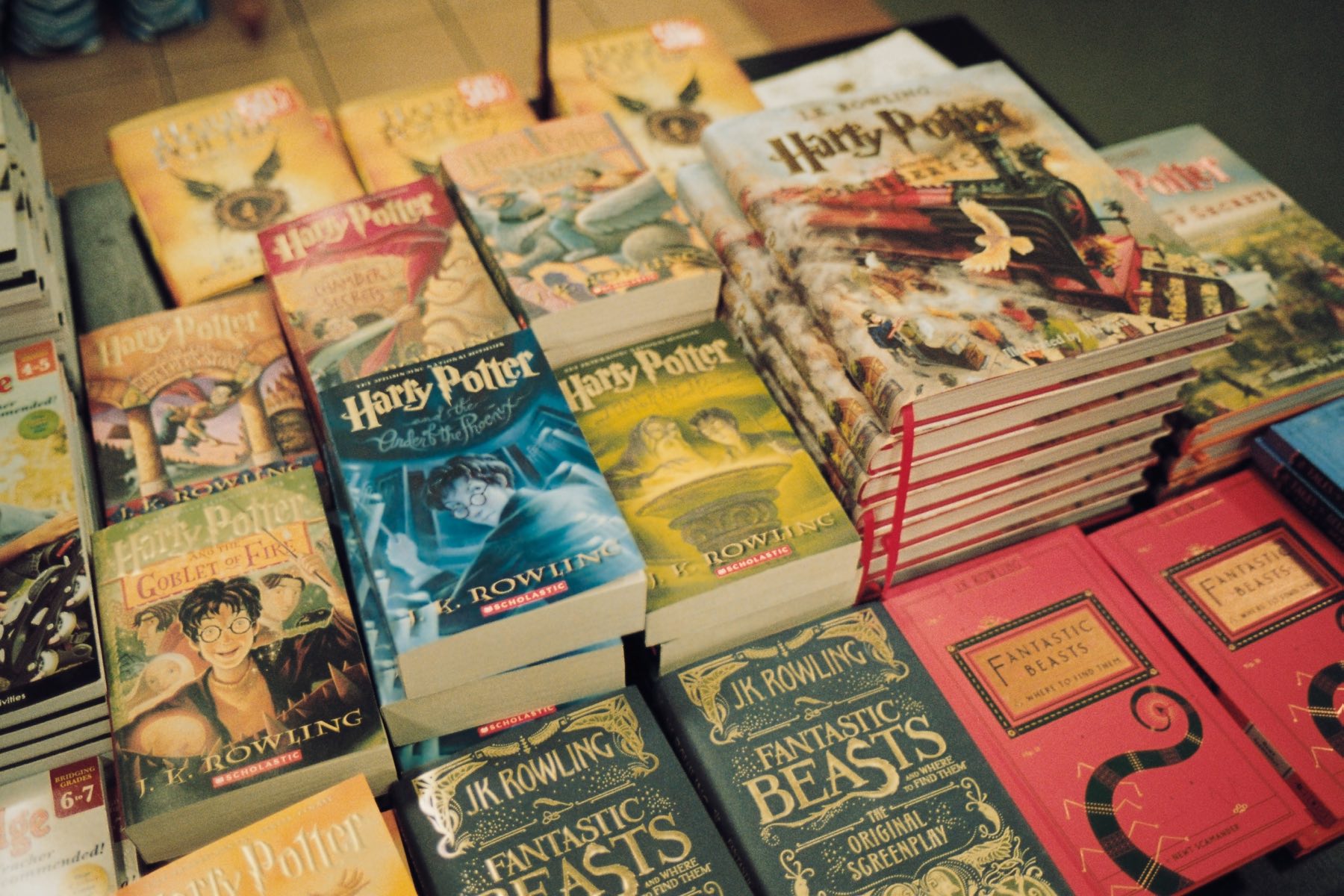 The success of Harry Potter is a rare thing among books.Half Price Books

Any lover of books should see the value in demanding they all be published in the same quality and style offered by the Folio Society. To my knowledge, there is no higher form of the printed word than what comes off the Folio Society’s press - beautifully crafted, highly imaginative editions of the world’s finest literature, many containing delightful illustrations and superb typography. Because anything less than perfect is unacceptable.

Juniper Books is another publisher who celebrates the printed word and has carved out a market niche with their custom book covers that, when stacked on a shelf, create a combined scene or mural. They can do this for any book series, like Harry Potter, or their designers can curate an entire library with custom covers. They also sell a nice collection of modern and classic literature in the form of custom books that are worth having too.

And let’s not forget about Pushkin Press. They publish most of the twentieth century’s greatest writers, such as Marcel Aymé, Antel Szerb, and the highly acclaimed Stefan Zweig. The deluxe editions of Zweig’s work, in particular, translated by Anthea Bell, should definitely find their way onto the shelf of every home library. Each book is a masterpiece in itself. Having lived through both World Wars, his thoughts and observations on the human condition still hold an incredible relevance today and will continue to do so for years to come.

Looking at the world of today, it’s a shame to see the average person’s existence shrivel like dehydrated fruit to where the essence of our entire self-worth is defined in the small aperture question of “What do you do?” Our library, nurturing imaginative purposefulness, would become the means to a whimsical self-salvation after the joy of reading is finally realized.