Thunder Of The Gods

How might a primitive people react to their first introduction with airplanes?

The Lockheed Martin F-35 Lightning II is a sarcastic portrayal of the misguided leadership found in the upper echelons of business and government. There’s no denying the maladies found in the design flaws, misuse of technology and resources, endless costs and laissez-faire oversight. The whole operation is such a bastardized thing I don’t whether to throw feces or spit. Worst of all, there is nothing remotely shocking about controversy procured at this level of nincompoopery because in the end it always comes down to that devil of a thing called money. But let’s forget about that idiocy for a second and focus on a more provocative subject, sound.

Peak sound levels for jet engines are measured off-plume at distances of up to 25 meters, and for most modern fighter jets this noise registers between 140 and 150 decibels. If we compare this to passing trains at 100 dB, car horns at 110 dB, and air raid sirens at 120 dB we find the F-35 abomination is a much more deafening irritant than any of these other goddamn annoying sounds. 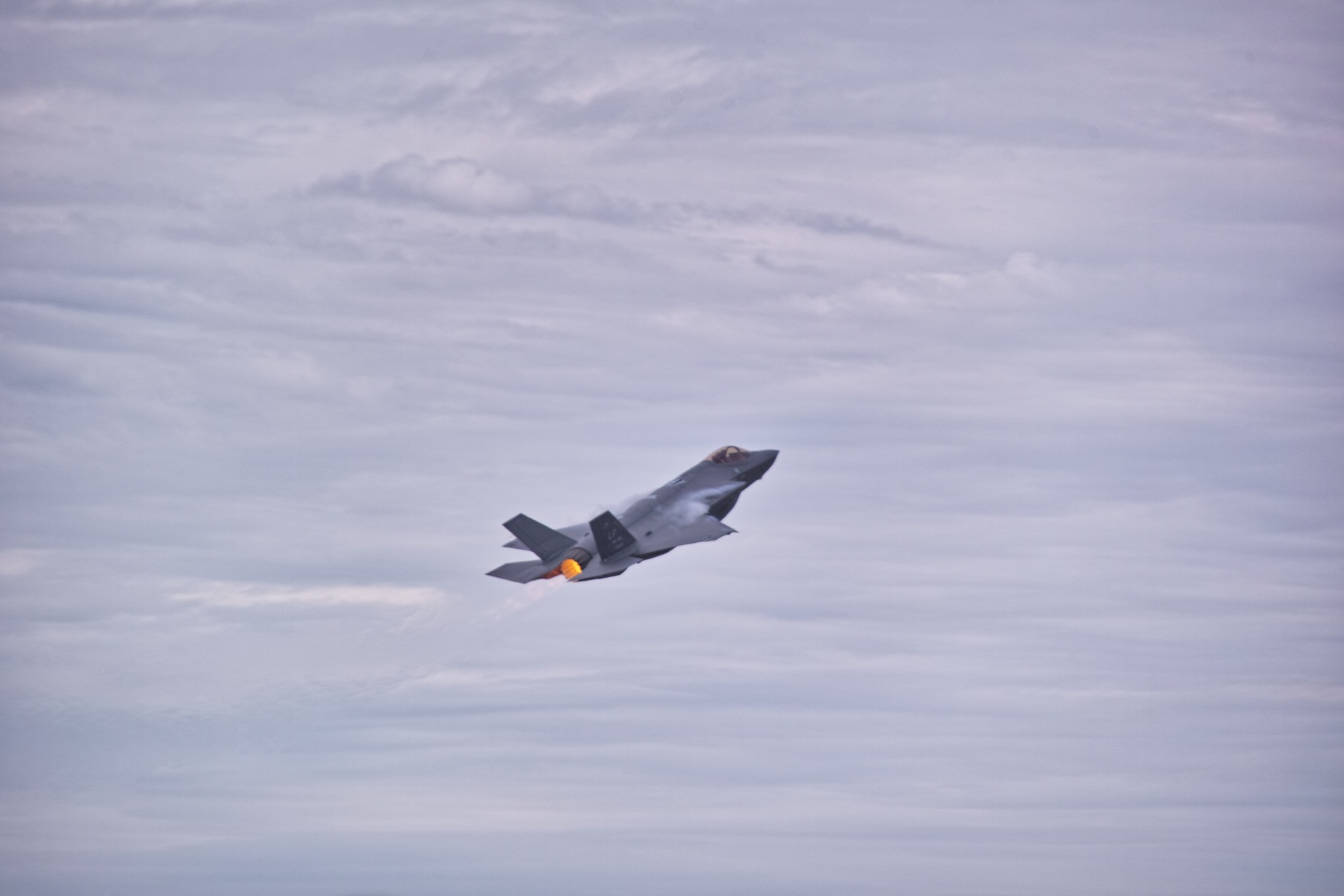 Suffice to say, the F-35 is loud. Really loud. But so what? It’s not like anyone pulls up a lawn chair next to an idling jet engine and waits for their eardrums to rupture when the afterburner is fired up. Plus, the power of sound waves diminish the further away they are as they must follow the mathematical constraints enforced by the Inverse Square Law. This acoustic phenomenon states that as sound waves propagate spherically, the intensity will weaken by 6 dB for every doubling of distance from the sound’s origin.

Still, nobody wants to have their quiet lives disturbed by obscene military aircraft flying overhead. Public coalitions across the country have opposed the F-35 from being stationed anywhere near their homes. Grievances can be submitted via online petitions, a means to cry out in small, ineffectual voices.

Advocacy for healthy living spaces is all fine and dandy but apathy tends to kick in while listening to second-hand complaints about jets terrorizing peaceful neighborhoods. That is until you actually witness the aircraft thundering across the open sky at full thrust.

For the indifferent observer, air shows provide a unique opportunity to behold these flying marvels in person and feel swept up in awe by the theatrical dramatics. When the F-35 engine ignites you immediately sense the all-inclusive power and feel stupified that a single person can command such authority. The engine accelerates, the ground shakes and the defeaning roar screams out as deep sound waves course through your veins, erupting goosebumps all over your body.

The colored commentary begins lickety-split and you realize the entertainment is just another live-action version of Team America: World Police. And those of us unaffected by blatant evangelism are left asking the question of whether the raw power of this advanced technology could have any other outcome than perpetuating war and blind nationalism.

The Miracle of Cargo Cults

Humans think of themselves as being so smart, so superior to the plants and animals they so arrogantly disregard, and they’re kinda right. Humans are the only animal on earth capable of appreciating the algebraic simplicity of the Inverse Square Law …well, some of us anyway. And so it brings me great pleasure to be that guy who has to bring up the miracle of Cargo Cults to highlight one of those knee-slapping examples where man’s high intellect completely fails.

During World War II, armed forces were sent from various countries to islands in the South Pacific where they constructed strategic airfields and military bases. When the war was over, they went home. Then a very curious thing began to occur.

The once isolated natives of these islands started building straw and bamboo fetishes resembling airplanes and crude landing surfaces in hopes of luring back those strange visitors who had blessed their endemic tribes with good cheer and exotic gifts. 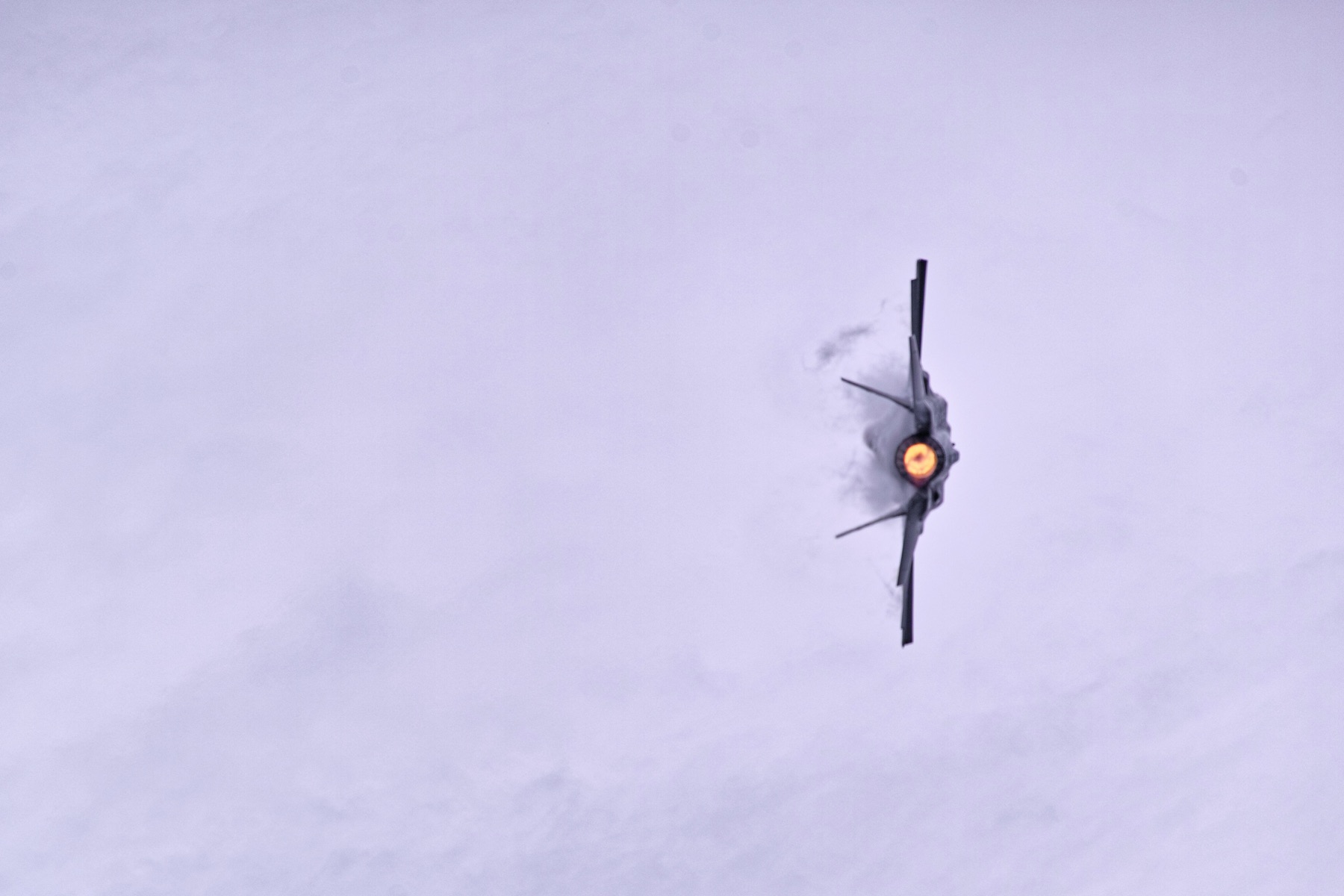 What sort of vessel can soar beyond the clouds on wings that don't flap?Your Local Air Show

The soldiers had arrived in vessels the primitives had never seen before, boats which needed no sails and oddly shaped dwellings adorned with wings that never flapped, yet could soar through the air. The troops had also brought fabulous treasure as extraordinary food, astonishing tools, and unlimited supplies that were sometimes shared with the natives.

The brief experiences with technology left the innocent people mesmerized beyond belief. From what unknown place beyond the clouds had the visitors arrived? They didn’t hunt or fish or farm or gather resources and yet they never lacked for anything. Who else but gods could possess such superior knowledge?

Beliefs were quickly established and faith rooted as new religions sprung up across Melanesia, spawned from the unusual encounters between a stone and wood people and visitors from a technologically advanced society.

The natives wrapped up all their yearning and hope in a naive belief that only their gods could save them from their toiling lives. Worshippers were certain that if the right ceremonies were performed and if their convictions were strong enough, those oddly garbed gods would return again one day, bringing forth supplies and salvation.

Widespread outbreaks of hysteria would at times sweep through these cargo cults. People would throw away their money, abandon gardens, destroy livestock, indulge in hedonism or sit for days fixated on blank horizons, straining all their senses for that thunderous engine sound once more.

Knee-slapping, isn’t it? I mean, there is no hesitation in describing such bizarre responses to modern machinery as being “irrational”, “illogical”, “delusional” or even “foolish”. Observers may also summarize the silly behavior with the general purpose phrase, “What the fuck?” 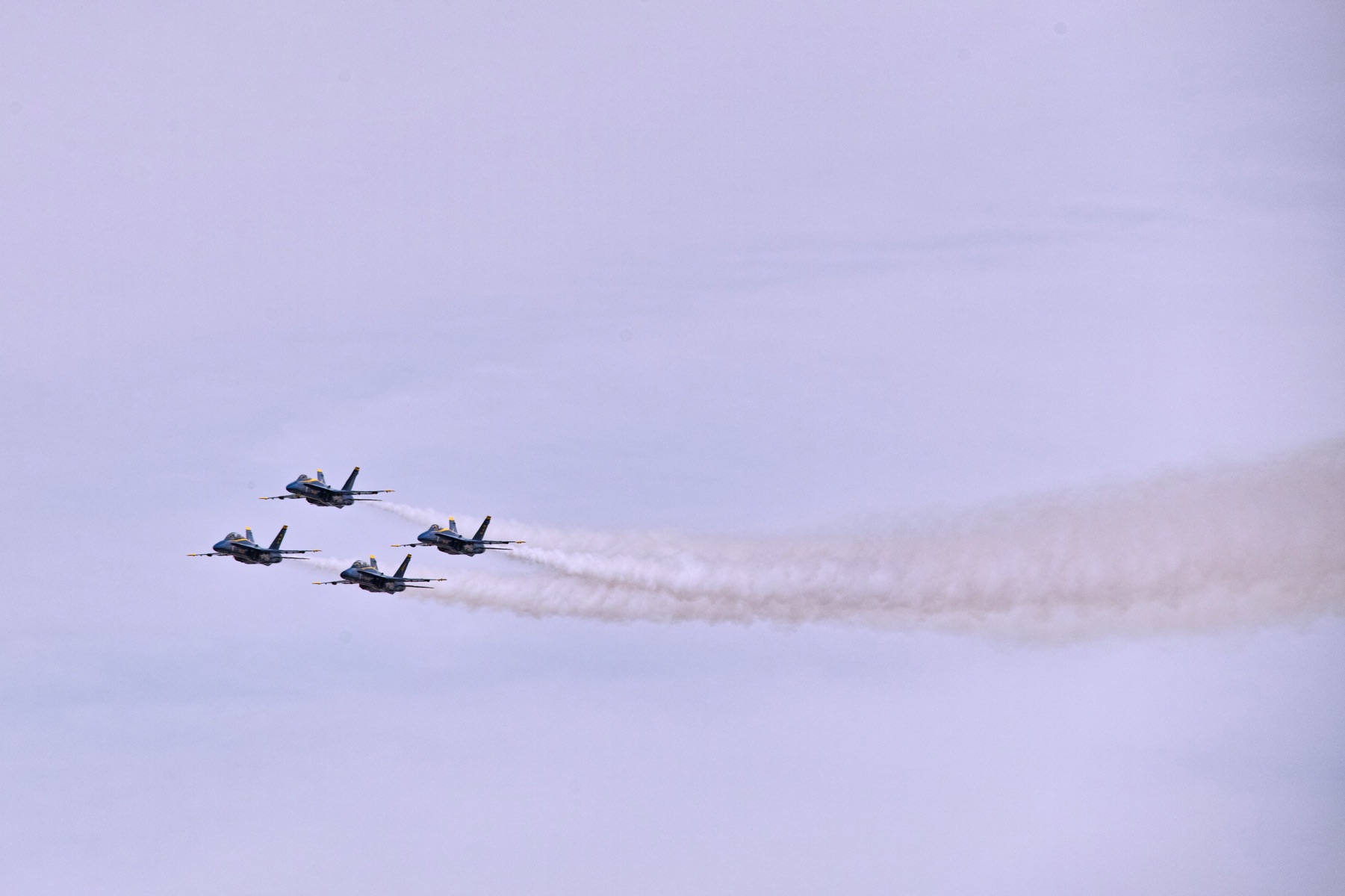 For primitive peoples, who else but gods could command such fantastic displays of the supernatural?Your Local Air Show

The messiahs never did return but the cults live on, their religion breaking apart and evolving into purer faiths and rituals, as is often the case. For as long as their social programming persists so will their religion.

There is much to learn from the anthropological studies of such technologically deficient peoples and their wide-eyed response to the godlike abilities our technology bestows. But we should take notice, however, that in the richness of documented history, the cargo cults scattered across Melanesia were probably not the first and only cases of spiritual genesis.

These cargo cults were, and still are, a simple people who don’t write much of anything down. But we can readily assume their limited vocabulary was without suitable words to describe the boisterous wonders they had so serendipitously encountered. But what if they had written? How would a scribe have documented an airplane if they themselves had no idea as to what it was they were actually seeing?

This question is of vital significance because ancient texts and myths throughout the world speak of visitations by divine beings arriving from the sky on fiery chariots to the accompaniment of smoke and riotous noise. Noise like the thunder of a thunderstorm or the clamorous shear of a waterfall. What sort of impeccable gods would put on such vain, egocentric driven displays of extravagant boastfulness?

Words, and thus facts, are often lost in translation. The Bible, Kangyur, Epic of Gilgamesh, Sumerian tablets, Ramayana, the Books of Ezekiel and Enoch, the star people myths of Native Americans, and countless others all make references to events which could be primitive interpretations of advanced technology. But where does our fantasy end and reality begin?

One hypothesis proposed by Erich von Däniken suggests that extraterrestrials visited earth in the distant past, inadvertently influencing religion and culture, like the cargo cult incidences of our more recent times. If we investigate ancient books and replace words like “heaven” with “outer space”, “angels” with “extraterrestrials”, and exchange other suspicious narration with words describing physics and engineering we are given a whole new perspective on these once strange and fanciful stories.

I believe that it’s possible for unknown foreign beings of a superior intelligence to have visited our planet at a remote point in time.Hermann Oberth, Father of rocket science

The thought of extraterrestrials visiting our own planet becomes conceivable only after we began reaching for the stars ourselves.

The alien proposition is indeed connecting the dots in an interesting way, but don’t be quick to accept it because there is another possibility. Robots. Why hasn’t anyone posed the question of whether these higher beings were actually robots? The cost and effort needed for life support systems in outer space is exceptionally high. It would be so much easier to just send robots.

Highly developed automation would 3D-print androids, install mission objectives and launch research expeditions to more inhabited planets. Plus, AI has the capacity to learn new languages swiftly. The dialects, semantics and all the subtle grunts and body twitches of communication would rapidly be assimilated into their computing systems.

Anyway, that’s how I would do it, to gain an understanding of the complex oddities of the Universe, to study intelligent life, how it evolves, and how it must inevitably destroy itself. But is there anything we can honestly derive from ancient scripture besides the male-focused values of the time periods in which the texts were written? 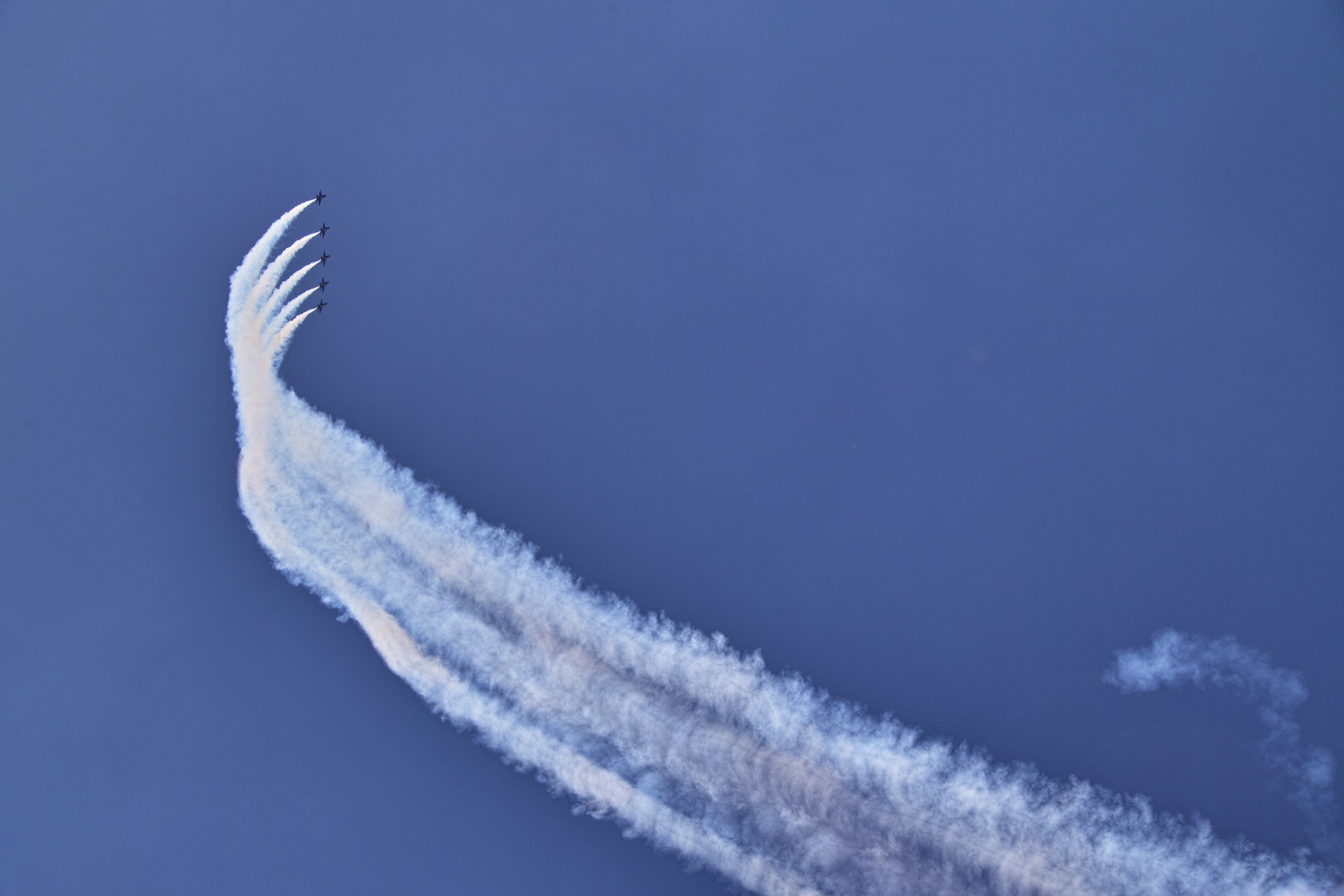 A quintet of jet aircrafts ascend towards the heavens on a fiery cloud of smoke and thunder.Your Local Air Show

The realm of Gods, extraterrestrials or even Bigfoot and leprechauns all sound amazing, but it’s as Carl Sagan once said, “Extraordinary claims require extraordinary evidence.” And the evidence scraped together so far has been rather paltry, circles and circles of insubstantial interpretation.

We may never know for certain the true origin of the romantic fantasies handed down to us by more primitive times or resolve any misconstrued intercourses with science and engineering which may have occurred in the past. So then we are left with a single course of action. Wrap ourselves in that comfort blanket of whichever self-satisfying discourse we so choose to validate our own headless beliefs. For me, that blanket will consist of everlasting joy found in the thunder of technologically superior gods.