The 2016 poop-throwing contest for POTUS was the most gender charged battle since the Billy Jean King versus Bobby Riggs tennis match in 1973. And while there are some interesting comparisons between the two, perhaps the smell will be most remembered for having to vote against the lesser evil.

Some of us don’t own televisions, boob tubes as they say, so we don’t have the pleasure of being influenced by the prejudice and biases of major news networks’ coverage of anything. Left to my our devices it was easy to recognize the 2016 U.S. Presidential race as an election in which Americans were voting against the candidate they didn’t want in office. Never before had both primaries appeared so irrevocably unqualified to lead a nation, and to a threatening degree.

After watching the debates between the two imbeciles, calculating voters must have felt confused as to who would be worse for President. The absurdities of this 4-year dilemma was brought to our attention years ago in a 2004 episode of South Park where the schoolchildren are forced to vote between a douchebag and a turd sandwich for their new school mascot. One of the schoolchildren, Stan, didn’t see the point in voting and, as a result, is harrassed for it. The episode demonstrated the near-zero value of individual votes and the problem of undesirable candidates.

Indeed, 2016 campaign trail looked like an episode straight out of South Park—a battle between a pompous businessman, Donald Trump and the established political complex that Hillary Clinton submitted to. But just as much, the rival campaigns looked more like a cage match between Trump’s pufferfish potty mouth and Hillary’s buzz killing pantsuits. 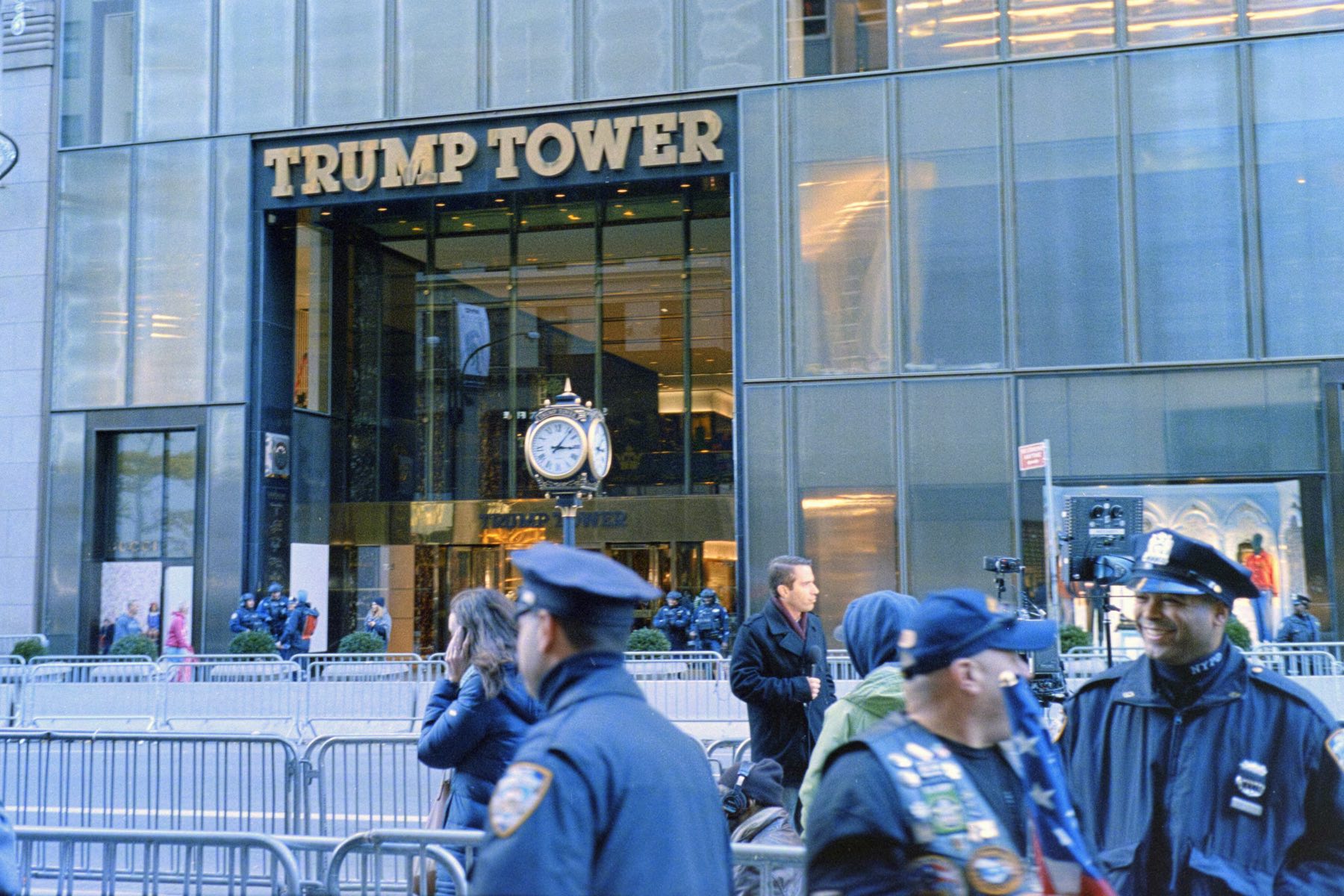 The pantsuits probably lost her the election as much as anything. Her fashion sense looked like it was cut from drab theater curtains - the all-white matching set elicited visions of crooked Televangelists coercing money from their subservient believers. If Bill Cunningham had seen Hillary walking down Fifth Avenue in one of those horrid pantsuits, he wouldn’t even make a motion towards his Nikon. The fashion keen eyes would just gaze past that frumpy figure and widen as they landed upon the divine woman behind wearing the radiant bebe floral print dress topped with a black feather shrug and black calf leather and glass embellished sandals from Dolce & Gabbana.

Of course, we should probably tread carefully when discussing politics and never blurt out the more uncouth images that float through our head as tasteless comments would only make us appear clumsy and barbaric. Like, we should never point out Hillary’s attire was enough to cause erectile dysfunction in male voters which would then help explain the gender gap in her election results. That’s too raunchy, never bring that up in a conversation with someone.

Trying to choose between Trump and Hillary was like asking if you’d rather be shot in the throat with a bow and arrow or have a K0212 firework explode in your anus. The answer is unquestionably neither. But you’re ridiculed by your cohorts and society at large for not picking one or the other, so you’re compelled to pick the lesser evil, which is… um, I guess I’ll choose the arrow.

But how did an impartial voter rationalize between electing Trump or Hillary for the most powerful job (allegedly) in the world? It simply cannot be done. The best thing you can do is one of two things: don’t vote at all, thereby exercising your right not to support either, or vote for the lesser evil. Wait a second, maybe I would choose the firework in the anus instead, I don’t know.

The problem wasn’t that Trump was elected, it’s that no one else was better, and not changing the political system, which basically has no qualifications for the job of President, will result in America revisiting the same absurdities down the road again and again. Admittingly, rebuilding the entire political system from scratch comes across as too impractical for most of us. But if we’re so unwilling to reconsider our political institutions, then maybe it doesn’t matter who is elected President. America gets exactly what it deserves.

Politics is a game. We could change the game’s rules to only count the popular vote. But would that matter? Actually, I can’t see how it would. Imagine changing the rules to American football so that the team with the most first downs won instead of the team with the most touchdowns. If the rules change, so do the strategies. The better team is always going to win. All we can do is give Hillary a big hug and a lollipop and fuggedaboutit.

Trump’s acceptance speech was surprisingly void of any of the trash talk he had displayed in the months leading up to the election. His teleprompter fed words were humble and professional. No divisive comments were made and he stressed how we should now all be working together as one. He even congratulated Clinton on her hard-fought campaign and commended her on the years of service she had provided to the country. His change of tone sparked might spark one’s curiosity and make them question if his endurance and ultimate victory in the Presidential race could be attributed, in part, to the constant coverage of his vulgar comments in the media, and if true… wow… That’s effing brilliant.

You know, the biggest problem mainstream media has is how they overdramatize stories, dressing them up in endless fluff to arrest the attention of viewers in an effort to increase their own ratings, sell ad space, and beat their competitors - the essence of which was portrayed beautifully in both Anchorman films. 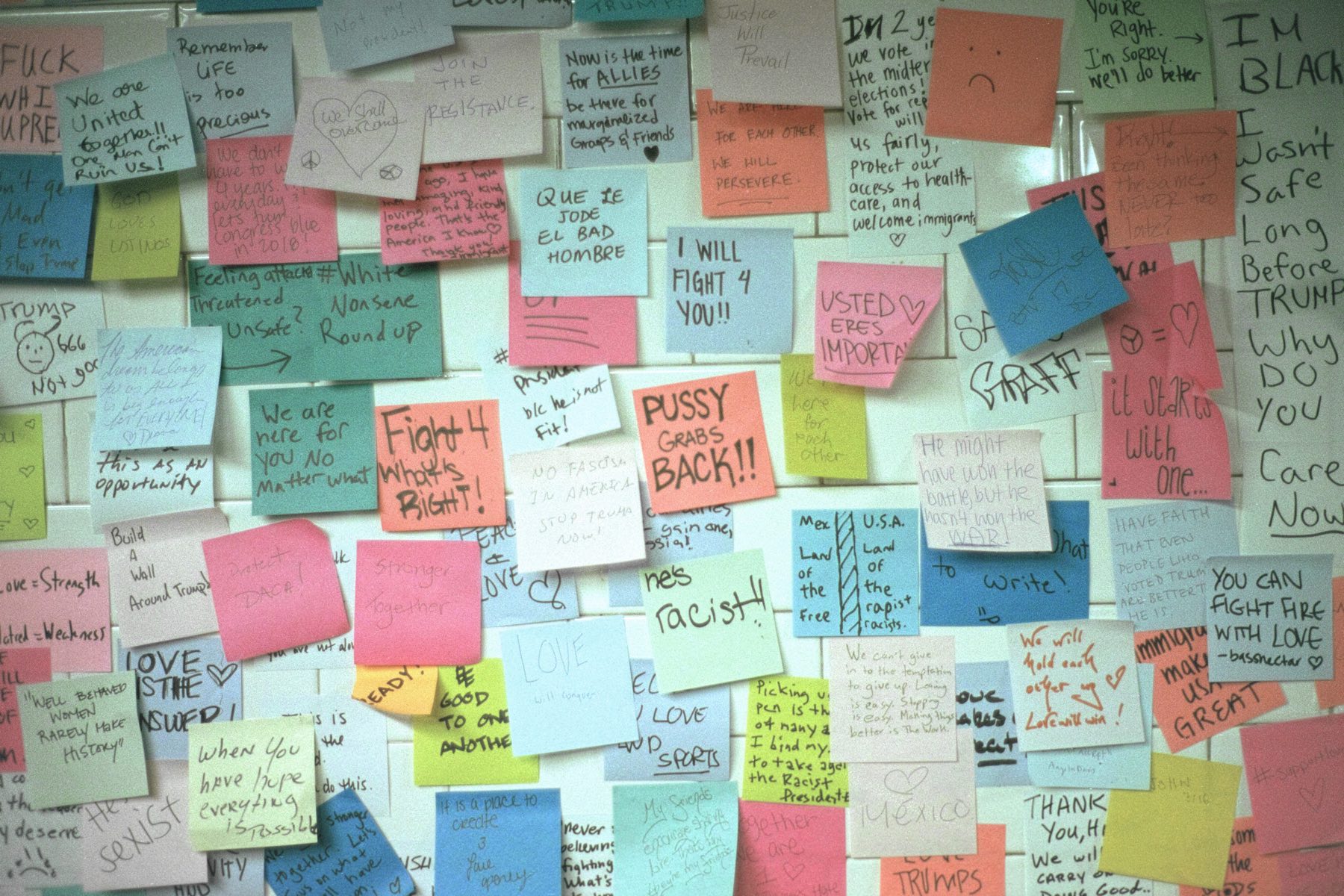 But were Trump’s ridiculous and outrageous statements really just there for his news-baiting strategy, a free publicity stunt of epic proportions?

If you are a little different, or a little outrageous, or if you do things that are bold or controversial, the press is going to write about you.Donald Trump, The Art of The Deal, 1987

Apparently so. Just a basic Google search turns up libraries of information regarding Trump’s obsession with publicity—he doesn’t care what they write as long as they write something. But really though, is all publicity, good publicity? Common sense tells us that negative coverage should result in negative opinion, but the research will often show that any publicity will increase awareness of the product in the end. And Trump was selling more than just simple-minded comments.

Trump is a master of publicity.Simone Payment, author of Donald Trump: Profile of a Real Estate Tycoon

Amazingly, if we review the 8 largest media outlets and record the number of times Trump or Clinton was mentioned in the headlines, we find the media’s attention was fixated on Donald J. Trump throughout the majority of the campaign. He was the clear publicity winner even though Clinton was spending a lot more cash on it than her business-minded counterpart.

The free publicity had reached unimaginable heights and showed that Trump really had trumped Hillary. Of course, if he had run against a better opponent, the end results may have turned out differently.

The Tiger Woods of Politics

Donald Trump is not racist. He poses. He says the most scandalous thing that pops into his head for the free publicity it generates in the media. It’s an addiction, to see his name headline somewhere in the paper each day. Both he and the news outlets are attention whores. Realizing this, it would be more prudent for Trump protesters to assail the media fro providing him a platform. The media plays a critical role in the social programming of a nation’s people. Had journalists actually done their job with integrity and researched the source of Trump’s rudeness, they could have reported his mania rather than support his ego. The racial, or other unmentionable tweets, are barely noteworthy for decent humans try to understand one another. And understanding Donald Trump would compel good citizens to offer their help and assistance in treating this unhealthy addiction for publicity. 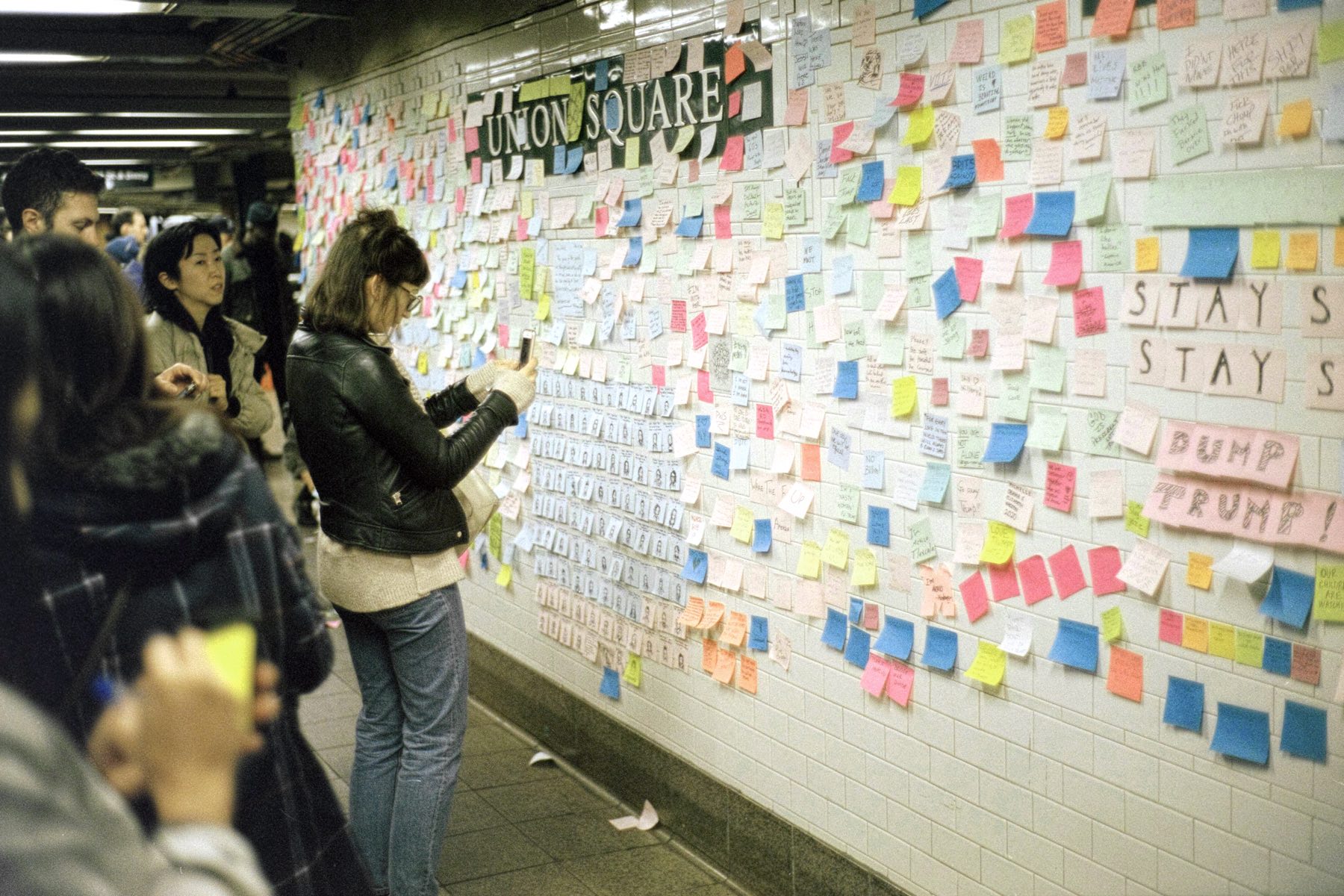 The collateral damage of Trump’s publicity tactics, however, resulted in a number of protests across the country, which the media overdramatized. But it’s hard to call their #dumptrump a bonafide protest when a permit was required in New York City to picket around a corral in front of Trump Tower. That’s more like a proper hobby. A legitimate protest consists of the masses from Occupy Wall Street that drew 250,000+ protesters in Rome, Barcelona, and Madrid each! A real protest involves cars turn over, buildings on fire, governments overturned. That must be an American phenomenon, to complain feverishly about some topic and then do nothing about it. Come on you hashtagging morons, get your shit together.

Now, every political analyst out there will have their own wisdom as to why Trump did so well, but regardless of anyone’s political views, Trump’s win was unprecedented. A rotten publicity stunt and the wings of an ignorant media machine carried him to victory. Only in America. 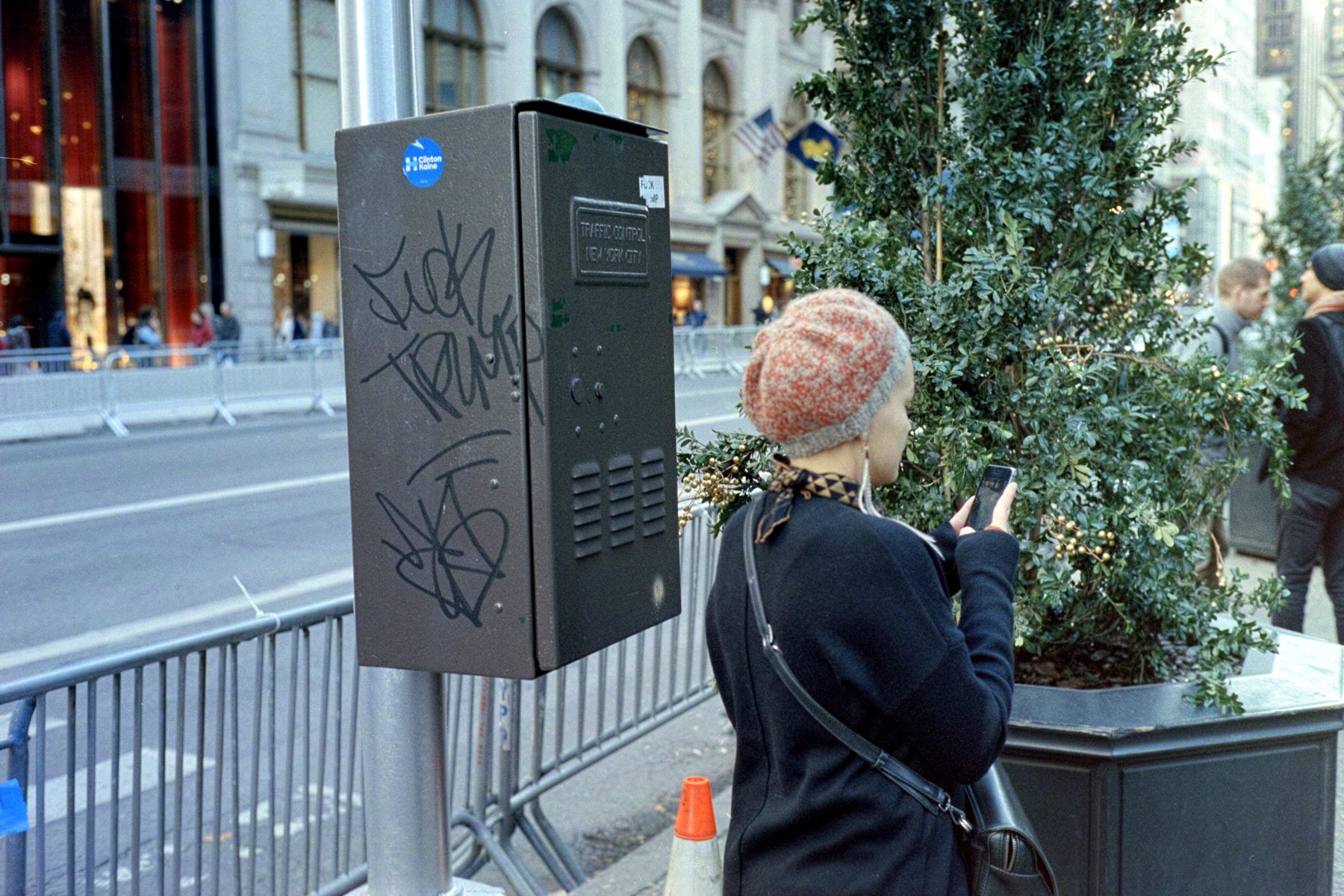 But in spite of his sleazy success story, Donald Trump is to politics like Tiger Woods is to golf. Their existence on the playing field has generated a far greater awareness from its spectators than would have otherwise been thought possible. And, like the Tiger Effect, one should fully expect Trump to continue the expansion of the game towards new horizons as he takes the oval office in January. Whether those uncharted territories are good or bad, we’ll just have to wait and see. Nonetheless, to watch the drama unfold is rather exciting, isn’t it?