What if Ralphie Parker didn''t want a Red Ryder Carbon-Action air rifle? What if he wanted a two-pound brick of sharp cheddar instead? Swap out his highly desired Christmas present and the film becomes an even better reincarnation.

America has an unhealthy obsession with animal protein. So hysterical are they to shove more protein down their gullet that you could inject 20 grams of it into human feces and then market it as a super food. The unfortunate fact we face here is that health education is driven by television commercials and misinformed YouTube personalities who are all quick to displace fiber-rich foods for large amounts of fiber-free meat, eggs, poultry, dairy, and fish. Is it any wonder why only 3 percent of the U.S. population gets enough fiber?

With smaller and smaller doses of this vital nutrient, fiber, the nation has all but forgotten the effortless release of healthy bowel movements. American stools have become so hard that when thrown, they could shatter windows instead of just splattering against them. It’s come to be that modern toilet bowls need to be equipped with garden tiller-like claws to mash up those dehydrated Lincoln Logs that are strained from the American buttocks. It’s so comical, it’s not even funny.

Actually, it is funny. It’s funny to see a nation so obsessed with health yet so illiterate about it when the topic comes up. And so it would bring me great pleasure to see the classic tale of A Christmas Story retold through the eyes of a plant-based vegan to scorn the cheese and dairy industry for supporting chronic constipation and nutritional illiteracy.

The characters in this remake would all resemble the original cast: the caring Mother Parker, the much, much older Old Man Parker, the daydreamer Ralphie and the slower brother Randy. However, the new perspective would not have Ralphie asking for a Red Ryder Carbine-Action air rifle with a compass in the stock and this thing that tells time, but instead petitioning for a large, triangular block of cheese in the shape of a Trivia Pursuit piece, riddled with holes and cavities, just like in the cartoons.

Envision a script that revolves around Ralphie’s attempts to subtly implant his cheese cravings indelibly into his parent’s subconscious mind. He lays awake one evening trying to think through his persuasive rhetoric. At breakfast, the following morning, an eagerness fills his voice, “Hey, Mom! Yesterday, they had macaroni and cheese for lunch at school. It smelled great!”

His mother pinches her eyebrows together and shakes her head in disgust as visions of public schools and their prison-quality rations pump a shot of hot venom into her angiographically-healthy bloodstream. Mother Parker refers to any processed food as “Betty Crocker” food—dry, stale, and would taste like pure unadulterated cardboard if it weren’t for all the added sugar, fat and sodium. 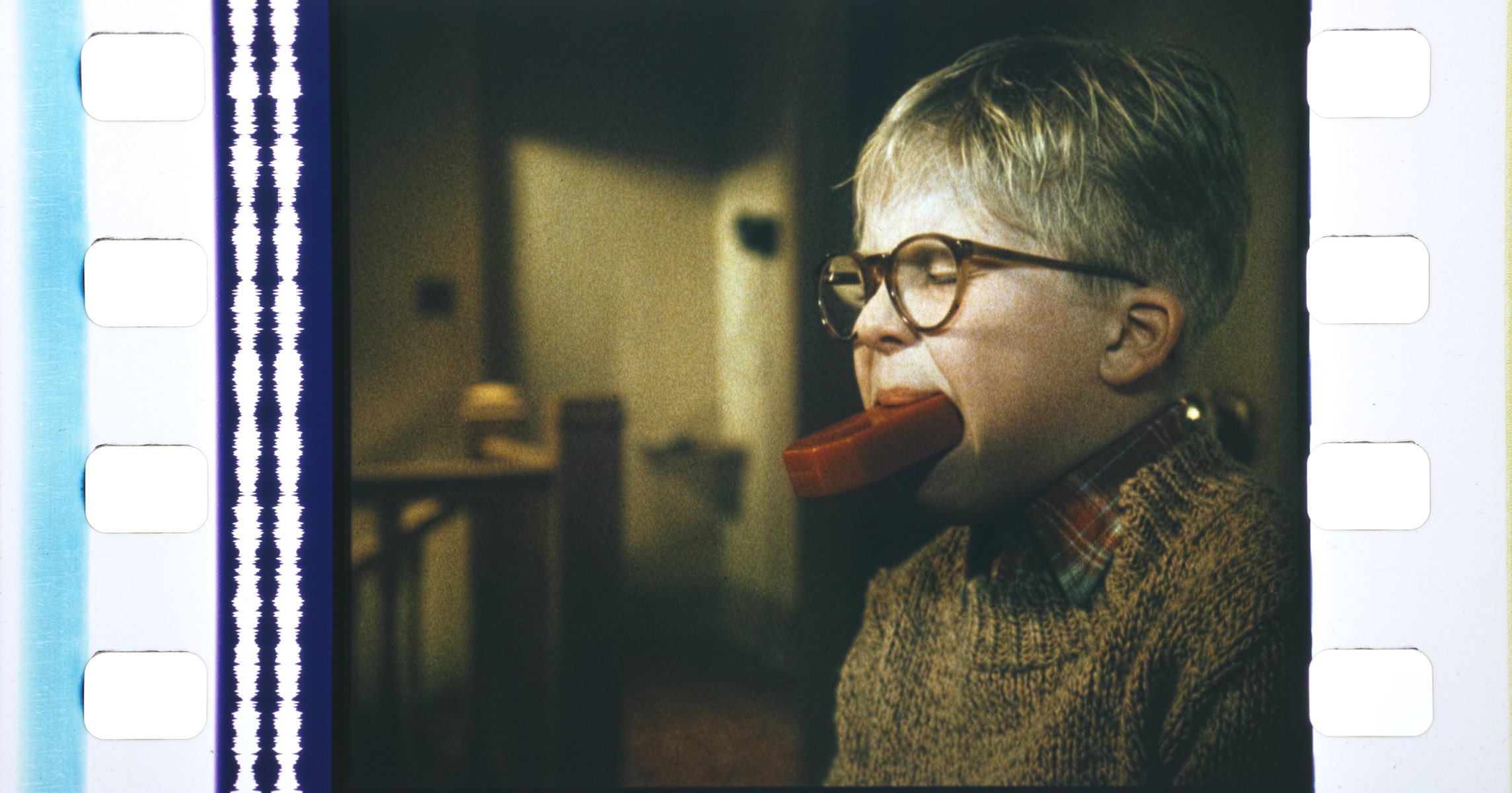 He's going blind! Ralphie Parker with a bar of soap in his mouth.A Christmas Story

Fortunately, she doesn’t take to Ralphie’s bait and with an unconcerned motive asks Ralphie what he would like for Christmas. Without even thinking, Ralphie blurts out his ardent desire, “I want an extra sharp two-pound brick of cheddar cheese, please!” 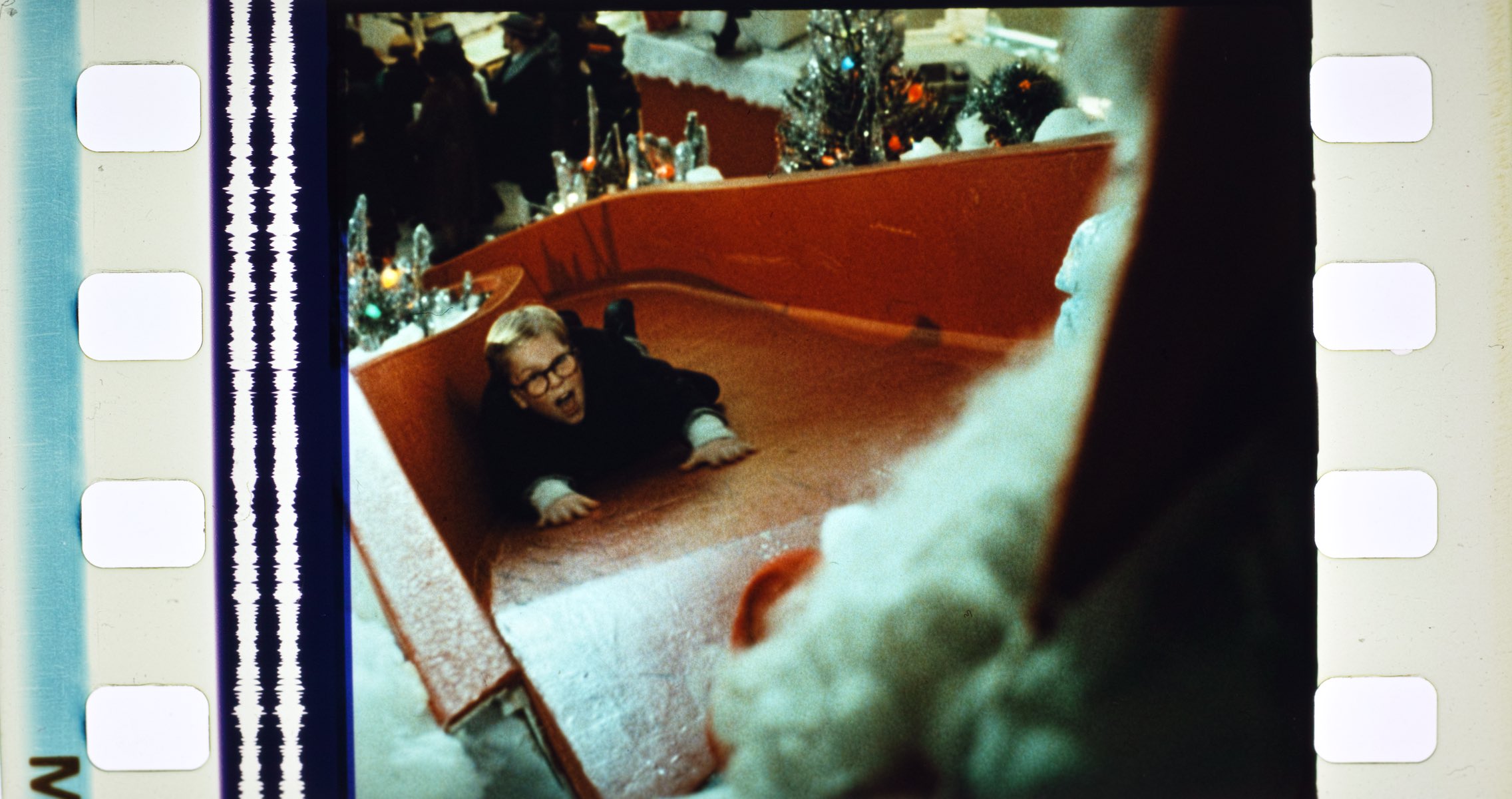 Ralphie gets the boot down Santa's slide.A Christmas Story

Ralphie wants nothing more than to nibble on those delectable looking, but nutritionally deficient, cheese cubes and keeps bringing the issue to his mother who incessantly lectures him on the dangers of constipation, needless calories, chronic acne, inflammation and digestive problems.

“Do you really want to sit on the toilet for 30 minutes at a time pushing a heavy brick out of your little rear, Ralphie?” she would ask him as the table was prepared for curried sweet potatoes with chard and chickpeas, black lentil celery couscous with jeweled fruit, a cocoa mock-mince pie and lemon infused water.

As the holiday celebrating consumerism creeps closer, Ralphie’s school teacher doesn’t fatigue in distributing homework assignments to the less than enthusiastic children. The class groans in unison as they are assigned another theme to draft, a miserable little task that’s as much fun as sticking one’s tongue to an icy flagpole.

However, our hero Ralphie perks up at this surprising turn of events. The subject of this theme is to write what they would like for Christmas. If Ralphie can win over Miss Shield’s support through his elements of eloquence, the flourishing result could lead his mother to finally see the light as well.

Ralphie scuttles home to perch at his cluttered desk and compose the greatest theme ever written. He wets his lips while the words pour from his No. 2 with a feverish fluidity.

The next day at school, Ralphie swells his chest as he hands over the perfected composition to Miss Shields. However, when the graded papers are returned to the class later that week, the sharp needle of critique bursts the cheerful bubble of hope in Ralphie’s mind.

The educator awards Ralphie’s masterpiece with a paltry C+. His sad, little eyes fall to the bottom of the graded paper to see the ugly witch had also slashed out a few words of derision in red crayon, “Imagine the fit your mother would have!”

Ralphie’s adolescent brain spins and spins as it tries to untangle the web of rejection his mother and teacher had caught him in. But then it comes to him. Santa! Why didn’t he think of it sooner? He would ask the jolly man in red for the 2-pound brick of Sharp Cheddar since the festively obese figure must have connections to buttloads of that government cheese that nobody else seems to be buying. 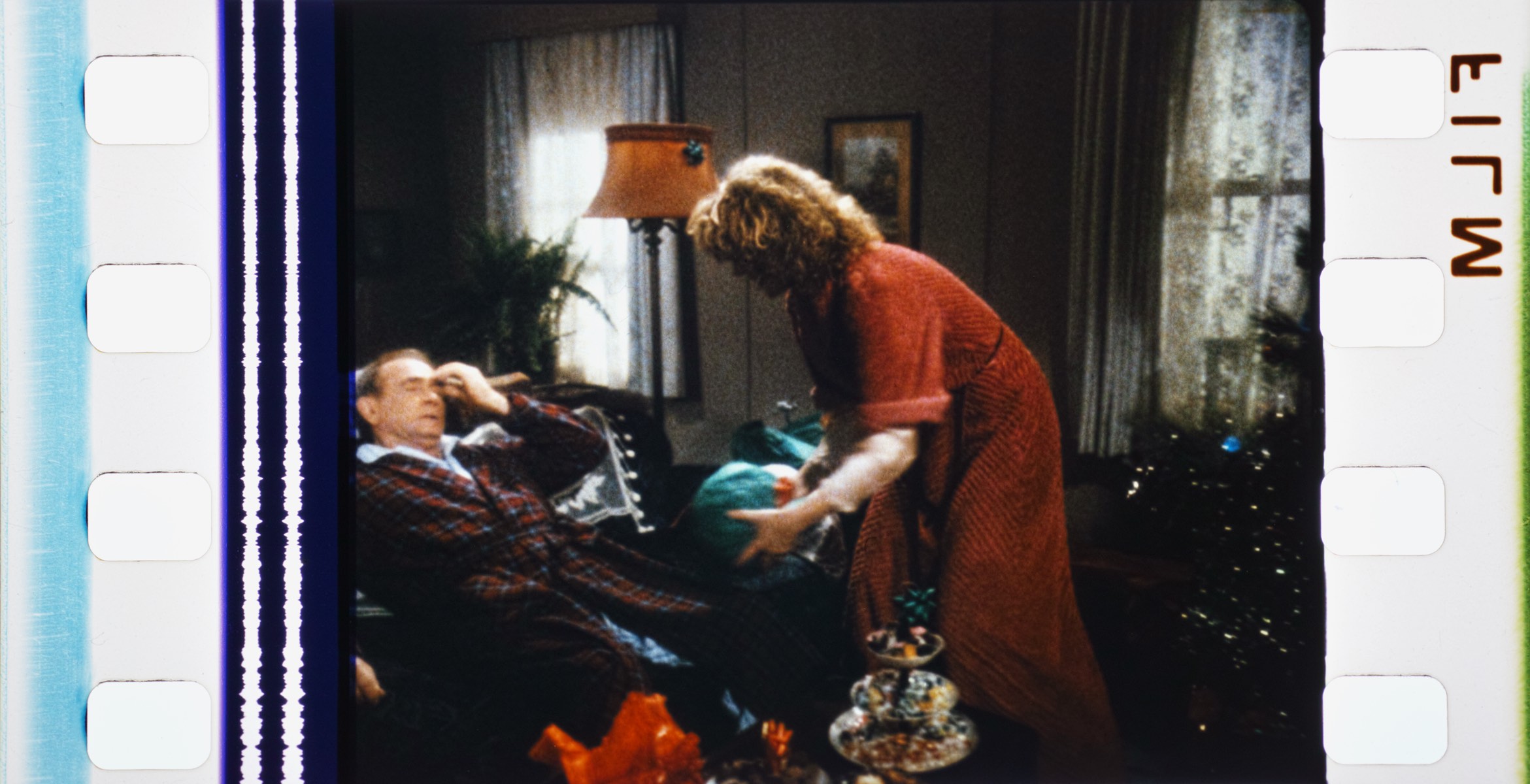 Here, let me drop this on your wiener.A Christmas Story

At Higbee’s department store, Ralphie and brother Randy queue up at the end of the lengthy Santa line while the parents scamper off to buy the Christmas presents. Santa turns to his elf and says, “If Higbee thinks I’m working one minute past 9:00 pm, he can kiss my foot.”

The two boys stand there for what seems like hours, progressing slower than hobos waiting in line for a bowl of soup. And just as they approach the finish line, the clock strikes 9 o’clock.

Ralphie watches Santa stand from his elegant throne and bark out the words, “HO-HO-HO!” Santa descends the stairs waving goodbye to the disappointed children still waiting to sit on the warm lap of a stranger. “Santa has to go finish making your toys, little children. Mehhhhhh-rry Christmas! HO-HO-HO!”

Ralphie can hardly believe his luck as the last ray of hope is extinguished by the jovially barked syllable bellowing out quieter and quieter by the second. A minute later, a voice erupts over the intercom, “Santa has left the building.”

Ralphie vents endless frustration to his friends, Flick and Schwartz, and other cohorts present during recess. The ceaseless complaints soon earns Ralphie a triple-dog-dare from a vagabond acquaintance to pinch a ten-dollar bill from his mother’s purse and buy the damn cheese himself. A silent awkwardness briefly holds the clique as no schoolyard kid can refuse the obligatory demands and social dignity upheld from carrying out a triple-dog-dare.

A montage ensues where we see Ralphie devising a fool-proof heist inspired in part by the Little Orphan Annie Secret Society radio program. The devious runt places a roller skate at the top of the staircase so when Randy runs down for dinner, he slips on said skate, tumbles down the steps and bangs his head against the woodwork.

While the mother is distracted with the wailing and injured child, Ralphie slithers into the parents’ bedroom, snips the ten-dollar bill from a handbag and reappears at the top of the stairs showing a moderate concern for his brother’s misfortune, at which point Ralphie then glances at the camera with a shit eating grin on his face. Oh boy, it worked! 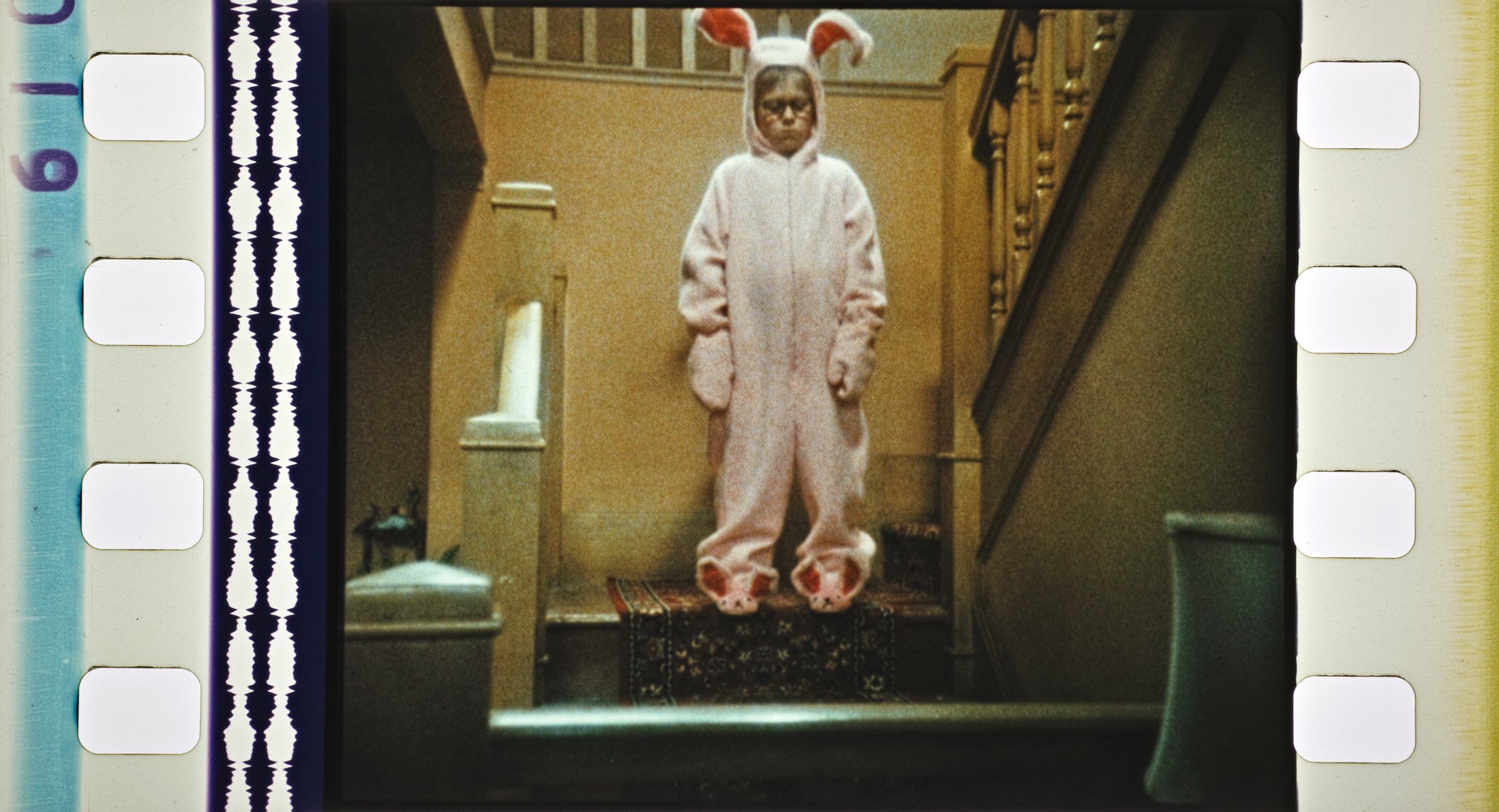 After school, the next day, Ralphie high tails it to the nearest convenience store and sprints to the dairy aisle where he spots a package of cheese sticks with an organic label printed colorfully on the front. Thinking he was doing his mother proud by choosing organic cheese, he grabs the bag and makes his payment. The walk home is euphoric for the sly charlatan who now has a striking spring in his step, a rosy grin on his face, and the cheese stashed secretly in the hidden recesses of his backpack.

That evening, under the guilt-free covers of his bed and a flashlight illuminating the appetizing snacks, Ralphie unwraps the first cheese stick and chews it down with a connoisseur’s zest, savoring each bite slowly as if it were his last meal.

He swoons over the tasty morsel. The high levels of sodium and saturated fat fondle his tastebuds with great affection while the casein molests his brain’s opioid receptors like crack cocaine. The cheese addiction sermons his mother gave him in the past brought forth waves of guilt, but hot damn did it taste good!

Ralphie wolfs down several of the rectangular sticks, but with each mouthful he chokes down a peculiar thought slowly emerges in his head. Why was each bite becoming less and less satisfying than the one before? The aftertaste didn’t feel worthy of a Christmas theme either. Regardless of the uneasiness growing in his stomach, Ralphie continues to unwrap and hammer down most of the bag with an uncontrollable compulsion.

The child gradually falls asleep with a loaded tummy and a lingering desire to vomit everything he had quickly devoured.

The next morning, Mother Parker breezes into the room to wake the children for school. She pulls back the bed covers and discovers a sleeping Ralphie still spooning his empty bag of cheese sticks. The strewn wrappers provide evidence of immense sin.

All hell breaks loose. Ralphie’s malfeasance combined with pent up sexual frustrations from the Old Man not being able to “get it up” any more creates a chaos of verbal abuse from the Mother that ends with her snorting out obnoxious piggy sounds at Ralphie’s tummy. It would leave him emotionally scarred for the rest of his life.

Randy wakes from the riotous clammer his mother is making without a clue as to what the hell is going on. Bemused by his own bewilderment he can only giggle profusely and play along like a buffoon making his own little piggy sounds.

Afterward, Mother Parker would blame the influence of her husband’s foul language for the tapestry of profanities she had woven in front of her eldest child.

Three days after the “cheese incident”, as it had become known as, a pediatrician would require the expertise of deep spelunking to empty out the cement now solidified in Ralphie’s butthole.